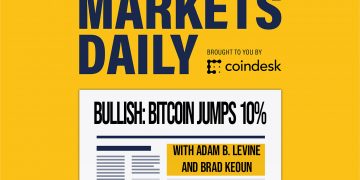 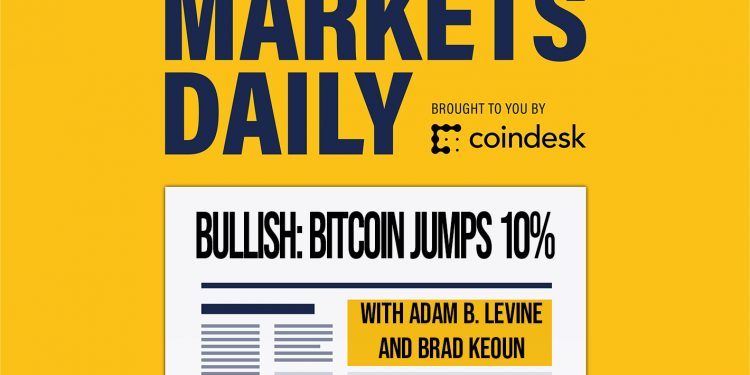 With bitcoin first dipping, then spiking up 10% yesterday, we’re talking market action, new Federal Reserve comments, the challenges of exchange and taking a look at CoinDesk’s annual most influential list…

No time to listen? Scroll down for the full episode transcript with links.

On Today’s episode, it’s Bitcoin’s BIg Bounce, DEX’s and CEX’s,  and a look at our Most Influential of 2019 list.

Adam B. Levine: It’s December 19, 2019, and you’re listening to Markets Daily, I’m Adam B. Levine, editor of Podcasts here At Coindesk, along with our senior markets reporter, Brad Keoun, to give you a concise daily briefing on crypto markets and some of the most important news developments in the sector over the past 24 hours.

Adam: We kick things off with Brad, who’s been watching the action in the overnights.

Brad Keoun: December is often a key month in the bitcoin market – it was Dec 2017 when BTC reached its all-time-high of $20k, and it was in Dec of last year that the market bottomed at $3000.

For the past couple weeks, bitcoin’s price charts have been sending bearish signals, with the market trending lower

Piling on, Arcane Research of Norway wrote that the market was registering “extreme fear”

But then on Wednesday, the price suddenly jumped more than $600 for a 10% gain, the most seen in two months

Today, the bitcoin price appears to be down just a touch, currently around $7200

CoinDesk’s Omkar Godbole writes that Wednesday’s spike has neutralized the immediate bearish case, in terms of the signals from price charts, but bitcoin would have to jump another $770 to pass $7,780 to confirm the start of a bullish trend

Adam: Turning to the news, there continues to be a stream of negative pronouncements about digital assets emanating from U.S. officials and regulators

U.S. Federal Reserve Governor Lael Brainard warned Wednesday in a speech that the Facebook-led Libra project has a “core set of legal and regulatory challenges” ahead.

She said more clarity is needed about the basket of currencies underlying the stablecoin and that its model is still unproven.

And Internet startup Blockchain of Things Inc. (BCOT) agreed to pay $250,000 to settle with the U.S. Securities and Exchange Commission for launching an initial coin offering without registering the token as a security with the regulator.

Brad: Even so, the traditional financial industry continues to show keen interest in blockchain technology

Accounting multinational EY on Thursday released new code that it claims can reduces the cost of transacting on the ethereum blockchain by as much as 90 percent, by batching multiple transfers into a single transaction

Adam:Depository Trust and Clearing Corporation, a key player in Wall Street’s clearing of bond trades, predicts digital assets will have a big year in 2020

Mike Bodson, the company’s CEO, says next year will be QUOTE dominated by the impact of geopolitical events, digitization and tokenized securities END-QUOTE

And an executive with Fidelity, the money management giant, envisions a future where cryptocurrency custodians will work behind the scenes, whitelabeling services in the way that supermarkets put brands on generic  food packaging

Brad: Finally, CoinDesk reports that the privacy coin Monero’s lead maintainer is stepping down after five years at the helm

Riccardo Spagni, better known by his alias “Fluffypony,” plans to continue his association with Monero but will turn the day-to-day leadership over to a longtime contributor to the community

Spagni’s other business ventures include no fewer than three crypto startups, and he told CoinDesk more than a year ago that the monero leadership left him feeling exhausted

For the first time in history, cryptocurrencies allow us to control our assets without having to rely on third parties such as banks or brokers.

This has been achieved through blockchain technology, offering participants a way to tap into decentralized networks via peer to peer connections.

However, despite this new tech, nearly 99 percent of crypto trading takes place on centralized exchanges, which seems at odds with the new era of digital money that should be utilizing blockchain’s trustless capabilities.

Centralized exchanges have a lot of advantages, they’re fast, cheap and in some ways quite private. On the other hand, to get those benefits, traders must give their tokens TO the exchange, and trust that they’ll not only be honest, but resistant to the sectors notorious if not ubiquitous exchange thefts.

It’s easy to see that even without downplaying the advantages, the disadvantages should give any trader pause.

After all, mistrust in middlemen, ie banks, brokers and centralized exchanges, is essentially what led to the success of blockchain tech in the first place.

History has shown us that placing our faith in these middlemen tends to be unwise and one consistently runs the risk of having funds stolen, such as what occurred this year as CoinDesk previously reported, up to 7 different exchange hacks valued at over $157 million US dollars were siphoned off.

Adam: So what’s the solution then?

Sebastian: Well, this is where decentralized exchanges come in.

Decentralized exchanges can circumvent the issues of custody by building its infrastructure on the blockchain with the use of smart contracts to coordinate trades from a users’ own wallet. These smart contracts must be implemented correctly with appropriate withdrawal controls, but ultimately a decentralized exchange should never require a user to give up control of their assets.

Adam: Decentralized exchanges must have a downside?

Sebastian: Of course, decentralized exchanges face their own inherent problems. Blockchains are generally slow by nature, reducing the number of possible trades per second thereby limiting volume and liquidity. What’s more, decentralized exchanges generally result in unfriendly user interfaces that are based around block explorers such as etherscan making it difficult for new users in the space to pick up and understand right away.

Adam: So what’s out there and what’s worth using?

Sebastian: Well, Binance for example, opened its decentralized exchange to the public back in April this year while OKEx, another major exchange, announced plans way back in March, but still has plans in the works. From my research, most decentralized exchanges lack the liquidity and volume I previously mentioned. More work needs to be done to attract traders away from the centralized model to a decentralized one in order for them to function optimally and as intended.

While the solutions to custody continue to be hashed out (pun intended) there are still a ways to go before users can begin experiencing the same user-friendly interactions, liquidity and volume they get from a centralized exchange. But we need to start looking into blockchain tech as a solution to these issues of centralized custody, otherwise, what are we all doing here?

Adam: And now, for today’s spotlight, we’re giving you the rundown of what has become an annual CoinDesk tradition – the Most Influential people in the crypto industry of 2019

Brad: That’s right, Adam — we’re getting closer to the end of the year and that means it’s time for the Most Influential list, a project that’s led by CoinDesk Features Editor Ben Schiller but features some incredible profiles written by CoinDesk staffers

The list highlights people who have had a big year, made significant contributions to the industry in 2019 or simply even been at the center of a big story. I picked a few of the most fascinating.

Brad: First on the list is JACK DORSEY – Twitter’s co-founder, who emerged as bitcoin’s biggest ally in Silicon Valley. Dorsey invested heavily in the networks’ future, and says he hopes one day that the interent will have a native currency, and he hopes that will be bitcoin

Next is Caitlin Long, a former Morgan Stanley banker who has established Wyoming as the most crypto-friendly jurisdiction in the nation. She’s helped pass a series of bills designed to attract crypto startups to her home state.

David Marcus – the French-born co-founder of Libra, the Facebook stablecoin project, became the face of the effort as he went to Washington to testify in high-profile hearings, where he experienced backlash from lawmakers and U.S. regulators. With big corporate partners like Mastercard peeling away from the effort earlier this year, the big question is whether he can convince Americans to trust Facebook with the future of money

Meltem Demirors, chief strategy officer at CoinShares, testified in Washington in July that while Facebook’s Libra was getting all the attention, it was bitcoin that should be getting the attention, with its track record of more than a decade, saying that the world’s largest and oldest cryptocurrency had already been tested

Ted Livingston – founder of the messaging app Kik Interactive, which was accused by the SEC of running an illegal securities offering when it sold digital tokens in 2017. He’s attracted notoriety and attention, along with some support from the crypto industry, for pushing back against the regulator

Gerald Cotten, former CEO of the now-defunct QuadrigaCX exchange, wasn’t even alive during 2019, if you believe his death report out of India from December 2018, but he was at the center of controversy from creditors who say he might not have actually died, and they’re now asking for his body to be exhumed

But wait, there’s meow. The last on the list is Hodlonaut, who publicly is a cat in an astronaut costume who emerged on Crypto Twitter as a folk hero representing the freedom to speak the truth and maintain one’s own privacy, challenging, among others, Bitcoin SV backer Craig Wright, who claims to be Satoshi Nakamoto, the creator of bitcoin. Hodlonaut became one of the biggest memes of the year in the crypto industry. In reality, CoinDesk reports, he’s a mild-mannered, middle-aged man from Norway who loves tattoos, ice cream, and tucking his child into bed.