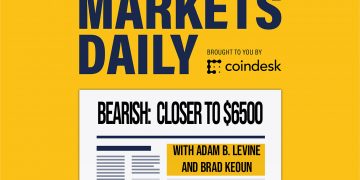 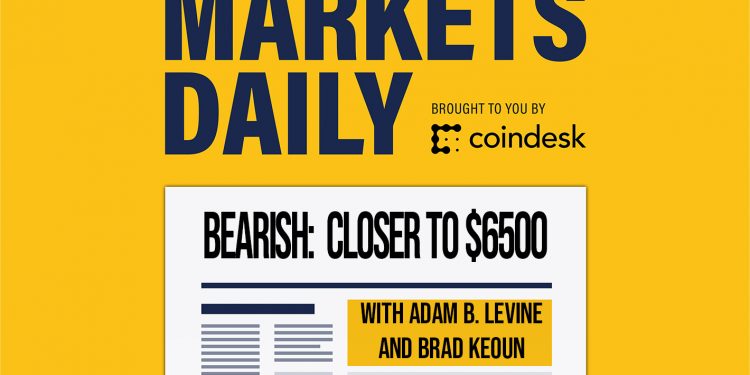 The bears are running as bitcoin brushes against $6,500 while cryptomining malware falls in popularity. This is CoinDesk Markets Daily, a podcast featuring Adam B. Levine and Brad Keoun.

Adam B. Levine: On Today’s episode, we’re talking crypto market downdrafts, Decentralized, or Blockchain Application usage, and Canaan’s post-IPO blues. It’s December 18, 2019, and you’re listening to Markets Daily, I’m Adam B. Levine, editor of Podcasts here At Coindesk, along with our senior markets reporter, Brad Keoun, to give you a concise daily briefing on crypto markets and some of the most important news developments in the sector over the past 24 hours. And now, we start with Brad for the daily bitcoin market briefing, before turning to the rest of the news.
Brad: Bitcoin price has fallen in all but two of the last 10 trading days and it’s currently around $6600
CoinDesk’s Omkar Godbole reports that bitcoin’s price chart is sending a bearish signal, and there’s a risk price could fall toward or even below a 7-month low around $6500. And this downdraft in crypto markets has crushed some investors hope for altcoins in 2019, with ether recently slipping into negative territory, now down 15% year-to-date, and XRP from Ripple, which is the third-biggest cryptocurrency by market value, down 51%
Turning to the news, the crypto-focused firm Circle is narrowing its focus again after several strategic cuts and business moves this year.
The company on Tuesday announced the sale of its already-shrunken over-the-counter trading desk to the San Francisco-based exchange Kraken, and said a few high-ranking executives would be stepping down
Circle now will focus on the development and growth of its stablecoin business, anchored around its dollar-pegged coin, which trades under the ticker USDC.
The announcement follows Circle’s sale of the Poloniex trading platform in October. In September, Circle exited the cryptocurrency research business.
Kraken, for its part, said its over-the-counter trading desk will now have about 20 employees, allowing the company to serve new trading partners in Asia.
The crypto exchange ErisX has gone live with its physically-settled bitcoin futures contract, aiming to take on the Intercontinental Exchange’s Bakkt crypto offshoot, which has targeted institutional investors with the new type of futures contract.
These physically-settled futures contracts allow hedgers to deliver bitcoin to settle a trade when the futures contract expires. Contrast this with cash-settled futures contracts where traders merely exchange money to true up. Cash-settled futures have been trading on the CME in the U.S. since 2017

Kaspersky, the Russian cybersecurity and anti-virus company, says there’s been a decline this year in what are known as crypto-mining attacks. This is when hackers are able to implant software on an unsuspecting user’s computer and then use that software to mine cryptocurrencies without the user even knowing. A security analyst for Kaspersky said that hackers appear to be finding more profitable opportunities through other types of attacks, including ransomware.

And finally, CoinDesk’s Paddy Baker reports that the Taiwanese phone manufacturer HTC confirmed this week that it would ax jobs to remain competitive and better focus on a handful of high-end products, including its blockchain phone, EXODUS. HTC has slashed more than half of its workforce in recent years, but the EXODUS phones are now getting pushed to the top of the priority list.
First unveiled in May 2018, HTC’s EXODUS phones can connect to decentralized networks and allow users to download and run decentralized applications in much the same way as conventional apps run on smartphones. The phone doubles as a hardware wallet, providing owners with a secure and mobile means to hold their cryptocurrencies.

Adam: For today’s featured story, we’d like to welcome Christine Kim, a research analyst here at CoinDesk for a look at usage for some of the most exciting, or at least most hyped projects on the blockchain.

Christine Kim: Thanks Adam. The blockchain industry outside of bitcoin is about more than just digital payments. It’s also about decentralized applications or dapps. Today, I want to take a deep dive into the dapp ecosystem and give you a sense of its growth, or lack thereof, in 2019.

You may not have heard very much about dapps since the CryptoKitties craze of 2017.

Adam: So, what’s the CryptoKitties craze?

So, that’s one example of dapp adoption going viral and having some negative unforeseen consequences on the blockchain.

And while there have been similarly popular dapp games on ethereum like Gods Unchained since Crypto Kitties, we’re not seeing a spike in usage or number of dapps like we did last year.

Adam: What do you think accounts for that decline?

Christine: It could be a number of factors but I think the main one has to do with the overall crypto bear market we’re only now slowly fighting our way out of. Back in late 2017 to 2018, we saw a surge in market demand for cryptocurrencies. The world’s second-largest by market capitalization, ethereum, reach an all time high in January 2018 of nearly $1,400 U.S. that of course helped bolster the dapp ecosystem ethereum was built to support. This year market interest in ethereum wasn’t so hot and pricing for the asset reflected as much. Right now, ethereum is about $140. Whoever said crypto was a safe bet, eh?

Adam: But what about DeFi? Wasn’t that a major narrative of 2019?

Christine: Good point. Decentralized finance or DeFi was indeed a major narrative of 2019. MakerDAO in particular truly kick-started an entire new category of dapps on the ethereum blockchain to emerge. As background on this topic, DeFi is category of dapps focussed on decentralized ways to replace traditional financial services. However, it’s still a very nascent industry. Despite it’s real growth this year in terms of users and numbers, it still remains the second most popular type of dapp across blockchain platforms today. The most popular remains projects focused on gambling. But for everything else? It’s anybody’s game.

Adam: And now, for our Spotlight segment, we’re looking at the stock-price action at Kay-nin Canaan, a Chinese maker of computers used to mine cryptocurrencies, since the company’s IPO last month. And spoiler alert – it isn’t pretty

Brad: That’s right, Adam, Canaan is one of the world’s biggest makers of computers used to mine cryptocurrencies, though its sales are far behind the industry’s biggest player, Bitmain, which is also based in China. Even so, last month Canaan took the bold step of selling shares publicly in the U.S. through an initial public offering. The company sold about $90 million of its shares, valuing the overall company at about $1.3 billion.

But in hindsight, the timing of the IPO looks terrible – for investors, that is.

Since the IPO, the price has declined in all but four of the first 17 trading sessions since the IPO, including a 35 percent drop just since the start of last week.

Now there appear to be several factors driving this decline in the stock prices, and the anemic market we’re seeing in bitcoin is certainly one of those. Industry executives say the manufacturers of the computers, known as mining rigs, are suffering from a lack of orders as users await clues on whether bitcoin prices will head back up

With that as the backdrop, the manufacturers are suffering from an inventory backlog, and Bitmain, in particular, has taken the offensive on several aggressive sales measures, including price cuts on top models, limited bitcoin-price guarantees and even rental options. Another problem might just be that Canaan is falling behind in the technological arms race in this fast-moving industry. Canaan has scheduled the release of its next-generation rig, the AvalonMiner 11 series, for early next year. But that machine is expected to be less power-efficient than the Bitmain S17+ model, which is already out.

Canaan is controlled by its 36-year-old CEO, who goes by the nickname “Pumpkin.” At the time of the IPO, his stake in the company was valued at more than $200 million. But due to the falling stock price, that’s now been cut by almost $100 million.

There was a warning sign ahead of the IPO, when the big investment bank Credit Suisse dropped off the underwriting team, and Bloomberg reported, citing people familiar with the matter, then the Swiss firm was worried about whether investor demand for the shares would be sufficient.

Matt D’Souza, co-founder and CEO of Blockware Solutions, which brokers mining-rig purchases, says he thinks Canaan is in a tough position. With the company’s sales on the decline, it apparently needs cash to accelerate the development of its next generation of mining rigs and try to stay competitive with Bitmain

A Year of Careful, Prosaic, BUIDLing

A Year of Careful, Prosaic, BUIDLing