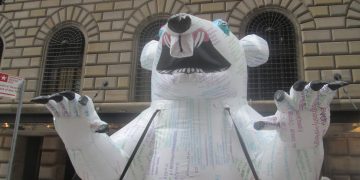 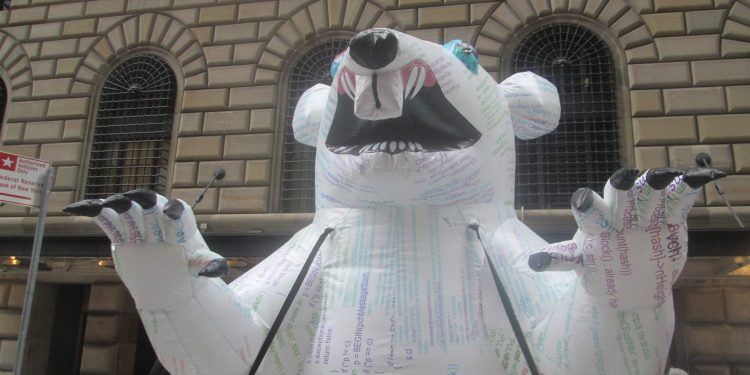 There’s a towering inflatable rat on Wall Street and it’s found a temporary home in front of a branch of the world’s most powerful bank.

Claws out, fangs fierce, the art piece installed Tuesday is an homage to the giant rats inflated by union protesters as a way to point a finger at companies for mistreating employees. But this latest rat has been updated for modern times. Instead of a dull brown, it’s covered in colorful bitcoin code and math equations in an ode to bitcoin.

The massive art piece was just installed as a sort of “protest” against government-controlled currency. “Bitcoin will take you apart,” the rat seems to argue from its perch in front of the Federal Reserve Bank of New York’s iconic stone exterior. On its piercing blue eyes, its pupils spell out the letters “PoW,” short for proof-of-work, bitcoin’s underlying algorithm.

Not a permanent installation, it’s expected to be on display for a few days according to artist and ex-hedge fund manager Nelson Saiers, who wants to use the piece to direct attention to The Fed, perhaps the world’s most powerful bank because it controls the U.S. dollar.

While this control is intended to keep the U.S. economy running smoothly, critics argue that central banks devalue money and that it’s inner-mechanics aren’t as transparent as they should be (an opinion that has a lot of clout in bitcoin circles).

As if a giant rat staring angrily at the Federal Reserve didn’t make this point already, Saiers specifically chose to set loose his creation on Maiden Lane, named after the entity that bailed out the giant companies AIG and Bear Stearns during the 2008 financial crisis.

But while rats have a long history in protest, it arguably carries added symbolism for cryptocurrency enthusiasts. Remember the time Warren Buffet called bitcoin “rat poison squared?” You could think of the art installation as a kind of commentary on that, too.

“Warren Buffett called bitcoin ‘rat poison squared’ but if the Fed’s a rat, then maybe rat poison is a good thing.”

But if his latest project draws more than a few confused stares this week, know this sort of protest art isn’t exactly new for Saiers.

Actually, the former mathematician has earned the nickname “The Warhol of Wall Street,” with paintings that depict the darker side of finance, including the market crashes and other complexities that can impact greatly those who understand it the least.

But Saiers’ work has aimed to go beyond critiquing money. He’s also taken a stand against non-violent drug crimes by hanging football jerseys spelling out the first 100 or so digits of pi (the connection, in his mind, being that pi is an irrational number and arresting someone for smoking pot is similarly “irrational”.)

However, this is his first piece related to bitcoin. While at first glance it might look like it, it’s really not an anti-Wall Street art piece. The rat is art, after all, so it’s really up to the viewer’s interpretation.

But Saiers gives viewers a few things to think about. For one, he thinks the rat gets the bitcoin philosophy across in an easy to understand way. “The sculpture’s supposed to kind of reflect the spirit of Satoshi and what he’s trying to do,” Saiers said, adding that bitcoin’s pseudonymous creator seemed to be “against bailouts,” like the one in 2008.

(When he or she first created and launched the cryptocurrency, they stuck a news clip of a bailout in the first block of the bitcoin blockchain, to be stored there forever, which many interpret as a criticism of banking and government ties.)

Saiers sees his art as a way for onlookers to learn about bitcoin and the Federal Reserve – both of them. “They each have their strengths and weaknesses. Satoshi is obviously very talented. The Fed has lots of talented people as well,” he said, not advocating for one or the other, even if they seem like conflicting

In short, he just wants people to just enjoy the silliness of it and maybe learn a thing or two.

“It’s art, so I hope they’re entertained by it. It’s informative, I hope people will learn [and] I’m hoping it’ll at least help people understand bitcoin better and be kind of faithful to what Satoshi would have wanted,” he said.

As for whether this could be achieved with a more attractive piece of art, Saiers seems most keen on making an impression. (“Bitcoin has left economics and has entered the public consciousness,” Saiers argued.)

Similarly, people sure seemed curious about the rat, with many passerbys snapping selfies with it already. When Saiers and his friends first put up it up, they accidentally put it on private land. The security guards chased them off to the public sidewalk. But they did so kindly, as they all “got a kick out of the rat,” he said.

Again, Saiers isn’t expecting much controversy. Part of the fun (he believes) is that the art is ambiguous. In his mind, it’s unclear whether bitcoin or the Federal Reserve is the rat.

Saiers sees one other interesting connection. Like Satoshi, the famous street artist Banksy is pseudonymous, and he speaks about rats very fondly.

“They exist without permission. They are hated, hunted and persecuted. They live in quiet desperation amongst the filth. And yet they are capable of bringing entire civilizations to their knees. If you are dirty, insignificant and unloved then rats are the ultimate role model,” Banksy wrote in his book “Wall and Peace.”

“People have been mocking bitcoin, but now it’s a $100 billion entity. It’s been scorned, but will it play a role in dampening the importance of central banks and fiat currencies?” Saiers said, adding: