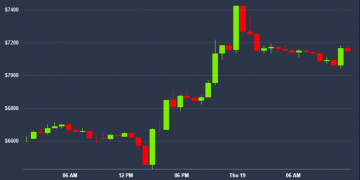 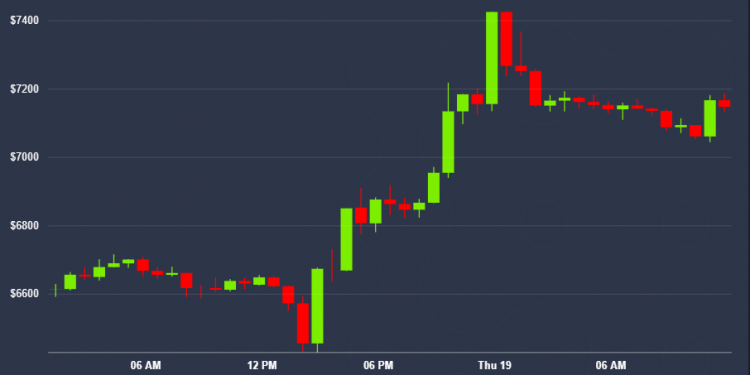 Bitcoin surged by over 10 percent on Wednesday – the biggest single-day gain since Oct. 25, according to CoinDesk’s Bitcoin Price Index.

Notably, prices had slumped to seven-month lows below $6,500 around lunchtime (UTC), but the breakdown was quickly undone and the cryptocurrency was trading above $7,400 before midnight.

The rebound from multi-month lows is a tell-tale sign of seller exhaustion – especially, as it erased the losses seen in the preceding eight days.

Wednesday’s spike has neutralized the immediate bearish case. That said, a bullish reversal would be confirmed only if and when prices rise above the Nov. 29 high of $7,870. That would invalidate the most basic of all bearish patterns – a lower-highs setup.

Bitcoin has charted (price via Bitstamp) a series of lower highs (arrows) and lowers lows over the last five months.

The last lower high at $7,870 was printed on Nov. 29 and is still intact. A UTC close above that level is needed to confirm a short-term bearish-to-bullish trend change, as noted above.

A move above that level shouldn’t be ruled out, as the 14-day relative strength index (RSI) has diverged in favor of the bulls. A bullish divergence occurs when an indicator prints higher lows, contradicting lower lows on price, and is considered an early warning of an impending corrective bounce.

Additionally, Wednesday’s big bullish engulfing candle is indicating seller exhaustion and would gain credence if prices find acceptance above $7,450 (the candle’s high) in the next 24 hours. That would further strengthen the case for a test of resistance at $7,870.

Both patterns would be invalidated if prices drop below $6,428, although that looks unlikely at press time.

The overall outlook would turn bullish if and when the falling channel on the weekly chart is breached to the higher side. Currently, the channel resistance is located at $8,463.