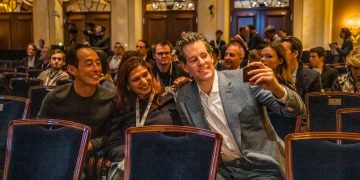 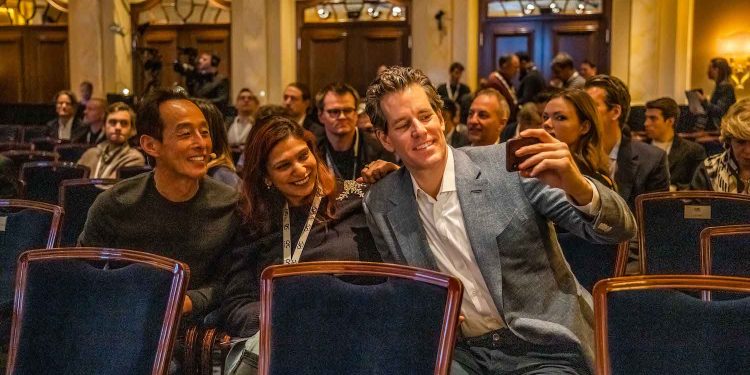 ST. MORITZ — The United States may be entering a second Cold War, according to some investors, who seem mildly curious but otherwise unconcerned about the prospect.

“It’s a kind of Cold War, but not just for crypto,” said Multicoin Capital’s Beijing-based partner Mable Jiang. “Currency is the leverage.”

Jiang said China’s goal is to leverage the rise of cryptocurrency, including both domestic bitcoin mining and a state-issued digital currency, to supplant the dollar and become the world’s leading economic power. Such rivalries feel lightyears away in the frosted Swiss alps, which are teeming with high-net-worth individuals soaking up the last few days of politician-free ski slopes before the World Economic Forum in Davos.

Roughly 250 people gathered at the Crypto Finance Conference St. Moritz conference this week, hosted in a luxurious mountain getaway at 6,000 feet, for a series of talks that largely revolve around embracing strict compliance standards. (Cameron and Tyler Winklevoss took a break from skiing to argue that thorough regulatory standards could help the U.S. retain its leading role in the global financial system.)

For crypto conference regulars who recall the post-2017 token boom correction, this gathering might feel like falling into a time machine, complete with security token sales and closed-loop stablecoins. Meanwhile, the World Economic Forum (WEF) worked with 38 central banks around the world in 2019 to develop digital payment or asset strategies, according to Sheila Warren, the WEF’s head of blockchain and distributed ledger technology. From Cambodia to Colombia, many emerging nations plan to launch operational stablecoin projects, beyond pilots, in 2020.

Today, most global commerce relies on dollars in some fashion. Warren said there’s “certainly an interest” among emerging economies in developing systems that don’t pass through New York clearinghouses. That’s where Jiang said the Chinese plans for a digital RMB currency come in.

“It’s not actually for people who live in China. They have WeChat or AliPay,” she said. “It’s another global settlement currency, including for developing countries around the world, which they [the Chinese] are friends with.”

Warren said the U.S. would likely resist systems that circumnavigate the dollar, adding Chinese government officials are actively participating in talks related to the WEF’s blockchain initiative. ConsenSys, the Ethereum Foundation and the Ethereum Enterprise Alliance are among the companies consulting leaders in those emerging economies, she said.

However, Warren added, the WEF doesn’t make those introductions nor recommend any country issue a digital currency. It merely offers guidelines and support to decision makers in emerging economies. Carmen Benitez, CEO of the Switzerland-based startup Fetch Blockchain LTD, heads yet another firm consulting countries eager to issue a cryptocurrency.

“They approached us,” Benitez said of her clients in the Colombian president’s office, which is setting up a bank-managed stablecoin for government projects in 2020. “They want a coin … they like the idea of keeping [the economic flow] as closed as possible with the coin.”

Cypherpunks might argue a state- or bank-issued currency with strict limitations imposed by the issuer bears little resemblance to “cryptocurrency.” But that doesn’t deter the blockchain fans gathered at St. Moritz.

Benitez said using a blockchain-based currency would provide better transparency and automation than Colombia’s current, paperwork-heavy system. Likewise, most attendees appeared more excited about fitting tokens into a traditional banking framework than they were about innovations like the Lightning Network, for example.

“Stablecoins and central bank digital currencies will be [widespread] in just a few years,” said Cyrus de la Rubia, chief economist of Hamburg Commercial Bank. “Even if Libra doesn’t come true, there will be another privately issued stablecoin backed by fiat currencies.”

To many of these attendees, bitcoin offers a welcome diversification of investment options. Indeed, Grayscale director Michael Sonnenshein said the firm garnered more assets in 2019 than all previous years combined, leading to a total of $2.4 billion worth of crypto under management. Bitcoin products are still the most popular, although altcoin dips don’t deter investors.

“We saw stronger inflows into our ethereum product last year,” Sonnenshein said. “Investors are looking at more than just bitcoin.”

European regulations like AMLD5 require all companies involved with money transmission, potentially including lightning liquidity providers, decentralized finance (DeFi) products like Compound and custodial wallets, behave more like banks in 2020 by collecting know-your-customer (KYC) information. This even applies to small startups working with microtransactions. Plus, the Financial Action Task Force established new rules that may force exchanges to collect more information related to addresses that users send crypto to in 2020.

Although no one knows for sure how these rules will play out, as they appear difficult to enforce, veteran bitcoiner Joseph Weinberg, co-founder of the Shyft Network, said he worries this approach may be regulating away censorship-resistance.

“Lightning applications may be accepting micropayments but acting as hubs, so if you think about being a payment channel provider, you’re effectively involved as an intermediary,” he said. “At the end of the day, this is all about sanctions.”

WEF’s Warren agreed dominant economic players, like the U.S., are now tightening the reins on activities with the potential to circumnavigate sanctions.

Former Commodity Futures Trading Commission (CFTC) Chairman J. Christopher Giancarlo, who recently became co-founder of the Digital Dollar Foundation to advocate for a central bank digital currency (CBDC) from the U.S., said the term Cold War was a wee bit “strong” for disparity between the U.S. and China. Yet he generally agreed the economic rivalry was reminiscent of “the race to land on the moon.”

“Many other global powers are looking to assert their own currency as an important reserve currency,” Giancarlo said. “A digital dollar allows for a more scalpel-like approach to sanctions.”

On the other hand, de la Rubia said it would take a long time for any digital currency to rival the U.S. dollar’s global dominance. He argued that the European Union (EU) would love for Saudi Arabia to price oil contracts in Euros, yet the EU has been unable to contradict the dollar’s supreme liquidity.

“Bitcoin will always be volatile, with supply well-defined and demand moving,” he said. “As long as China has international capital controls, it will be hard for the yuan to take over, even as a digital currency.”

When asked about bitcoin, Giancarlo preferred to compare Facebook’s Libra project to his own Digital Dollar aspirations and the yuan.

“Only one of those three [currency issuers] would be constitutionally prohibited from mining that data for any purpose other than illicit use,” he said. “A digital Yuan will absolutely be monitored by the government for many purposes … a commercial venture absolutely will mine that data to say whether you are shopping at Nordstrom or at Target.”

Giancarlo said he wants to dedicate the rest of his career to modernizing America’s financial infrastructure, and he sees a blockchain-based fiat currency as a part of that.

He would not say what role bitcoin might play in that future. Instead, he said there’s an increasing interest in exploring “legitimate and positive use cases.”

Currency is, after all, a tool for political leverage. And although “blockchain” is on the tips of everyone’s tongue this time of year in Switzerland, few people at St. Moritz acknowledge the role a decentralized cryptocurrency might play beyond an investing hedge.

Those who are bullish on bitcoin, not just blockchain, are left wondering how bitcoin can be a geopolitical hedge if most conduits for moving money around the ecosystem are essentially banks.