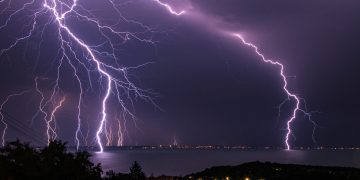 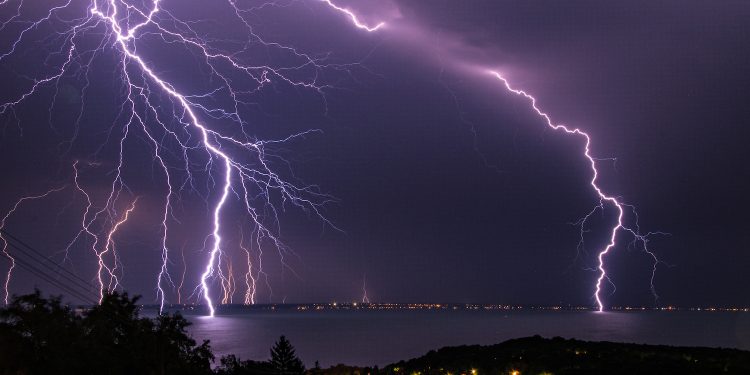 This is a visualization of the lightning network taken at 22:29 (UTC) on Friday.

Created by blockchain analytics startup 1ML, the snapshot represents all of the nodes running lightning software and creating public payment channels atop the bitcoin blockchain.

Looks complex, right? And believe it or not, this network is getting progressively larger each day according to 1ML.

In the past 30 days alone, the number of lightning payment channels has increased by roughly 36 percent, bringing to total to roughly 22,000 channels. Active lightning nodes have similarly shot up – over 16 percent in recent days – and presently sit at around 5,690 distributed nodes.

Launched in beta last March, the layer-2 payments technology is actively maintained and developed by over six different development teams spread out across the globe.

These include Eclair by Acinq, Lightning Network Daemon (LND) by Lightning Labs, c-lightning by Blockstream, ptarmigan by Nayuta, Rust-Lightning by Matt Corallo and Lit by MIT’s Digital Currency Initiative (DCI).

And even outside of these six, Pierre-Marie Padiou, co-founder and CEO of Acinq, predicts there are half a dozen more out “in the wild.”

Highlighting that the codebase to build lightning clients is open-source and available to anyone “without asking permission,” Padiou added that a list of 30 some-odd improvements to the network were agreed upon by developers during a summit in Adelaide, Australia November of last year.

“Now, after the summit, the work will continue to formalize the decisions taken during the summit, and implement them in the clients so that they can be deployed,” explained Christian Decker – core tech engineer at Blockstream – in a former interview with CoinDesk.

Since November, one feature has already been released by CTO of Lightning Labs Olaoluwa Osuntokun enabling “the ability to send a payment to a destination without first needing to have an invoice,” as detailed on GitHub.

Explaining that each client team “has their own favorite features,” Decker added that more changes to the network would be released in “incremental” steps emerging piecemeal over coming weeks and months.

As such, lightning developers are optimistic about the continued success of the lightning network, expecting growth trends seen in 2018 to continue to rise in 2019.

“We have been seeing tremendous activity during the past few months and are confident that this trend is going to amplify in 2019.”

According to blockchain analytics site P2SH.info, the amount of bitcoin sent through lightning channels since last June has skyrocketed from less than 25 BTC to 578 BTC.

State of the lightning network on bitcoin mainnet. Source: www.p2sh.info

Speaking to greater adoption figures in 2019, Decker told CoinDesk that the key behind developing “a very active and engaged community … building and improving lightning” would come down to its continued potential to “change how we do payments in the future.”

Indeed, the main use case of the lightning network as described on the official webpage is “lighting-fast blockchain payments without worrying about block confirmation times.”

Transactions using the lightning networks takes seconds to complete, compared to the 9 or so minutes – on average, at least, with fluctuations based on block variance and miner luck – for transactions directly on the bitcoin blockchain, according to data from bitinfocharts.com.

And while payments for goods and services using a debit or credit card is done with relative ease in most developed economies, restrictions to such traditional banking services is a common struggle for marginalized populations within (and outside) first world countries.

According to a world map of the public lightning channels spread out across the globe, most of the servers running on the lightning network are concentrated in North America and Europe.

Speaking to this user demographic, Padiou explained to CoinDesk that while bitcoin’s development community has “historically been stronger in North America and Europe,” the nodes being depicted on the map did not show the number of mobile users for lightning, who may be “a bit more evenly distributed.”

“I believe that the language barrier is often underestimated, and initiatives like [Reading Bitcoin] which provide translations to Chinese, Japanese and Korean [people] are very useful.”

From Decker’s point of view, the map of public lightning channels “matches pretty closely with the map of Internet users, or the map of deployed bitcoin nodes” which is “to be expected since those are the regions that are most likely to know about bitcoin, have some bitcoins, and [are] testing the software.”

Nevertheless, Decker affirmed that developers are dedicated in 2019 “to extend the reach of bitcoin and lightning globally.”

“I’m not aware of any specific plans to foster adoption in certain regions specifically [but] we’d definitely welcome any user from those regions, and do our best to support them,” said Decker.

Since March of last year, the lightning network has seen the number of new payment channels grow from roughly 1,500 channels to over 20,000.

For now, there aren’t specific numeric targets on the agenda for lightning developers to reach by the end of 2019, though as mentioned there is a long list of features aimed at expanding network capacity expected for roll-out in months to come.

Standing for “Basis of Lightning Technology,” BOLT 1.0 is a common, open-source repository of code that contains all the necessary technical requirements or specifications for users to participate in the lightning network.

Not to be confused with BOLT – a lightning-inspired zcash implementation of the network released August last year by Dr. Ayo Akinyele  – BOLT 1.1 is the envisioned upgrade to BOLT 1.0 that will encompass the new development work going into lightning.

Speaking to CoinDesk in a former interview, Osuntokun acknowledged that the exact roadmap for BOLT 1.1 was “difficult to put estimates on … as it largely comes down to the prioritization of the various development team for each implementation.”

“[Clients] will implement features in parallel, according to their own prioritization and to the extent that suits them best … some implementations may choose to omit some of the features,” added Decker.

The five features that Osuntokun highlighted with CoinDesk as possessing the “biggest impact to the end-user” includes:

1. Splicing: Currently, each payment channel possesses a fixed capacity only able to send the amount of bitcoin initially staked at the outset of channel creation. However, in the event that a user would like to increase or decrease channel capacity, they require opening an entirely new channel with the same participants. Requiring the same amount of fees and confirmation wait time as a regular bitcoin transaction, splicing ensures users are able to avoid the initial pain of creating a new channel by making adjustments to the capacity of existing ones.

2. AMP: Standing for “Atomic Multipath Payments,” AMP according to Osuntokun presents “a massive boost in usability” for the lightning network. Instead of payments being routed along a singular path on the network, AMP allows users to send through fragments of payments through multiple public channels in the network. Additionally, as pointed out by c-lightning developer Rusty Russell, AMP can also be leveraged by users as a “bill splitting” feature when making lightning payments to a single party from multiple different sources.

3. Wumbo Channels: Named after an episode in an American children’s cartoon show called Spongebob Squarepants where starfish character Patrick uses the term “wumbo” to denote increases in size, wumbo channels refer to an increase on the maximum number of bitcoin that can be sent within a lightning payment channel. Put in place by lightning developers for safety reasons, the maximum capacity of a channel at time of writing is 0.16 BTC or roughly $570.

4. Static Address for/to remote outputs: Aimed at improving “disaster-recovery scenarios” on the lightning network, Padiou explains that static addresses ensure easy fund recovery for users. “This feature – the static information address – means that with only the seed to your lightning wallet you would be able to recover the main balance in your channel,” said Padiou. The seed being a mnemonic recovery phrase attached to all lightning (and bitcoin) wallets, users currently require both this information and channel-specific information to recover lost funds.

5. 2p-ECDSA: Perhaps the coolest upgrade in the eyes of Osuntokun, 2p-ECDSA would camouflage the transactions carried out on the bitcoin blockchain to create lightning payment channels. At present, transactions opening and closing a payment channel are easily differentiable from transactions on-chain. This improvement once implemented would add an extra level of anonymity for users by making lightning channel activity more difficult to distinguish from traditional bitcoin payments activity.

Speaking to all the anticipated changes to the BOLT repository, Padiou highlighted:

“We didn’t have to change very important, very low-level design decisions … It’s very good news because we could have made big mistakes and could have had to start over but it’s not the case. Going to 1.1 is just building upon the already working first version.”

Through the lens of the development agenda set for 2019, the priority, then, in Padiou’s mind, is “reliability in all its aspects” to encourage continued adoption of the tech.

“A payment network needs to ‘just work.’ It only has value if it allows you to send and receive money when you need it,” Padiou contended, adding:

“The more reliable it gets, the more companies with large user base will be ready to support it.”