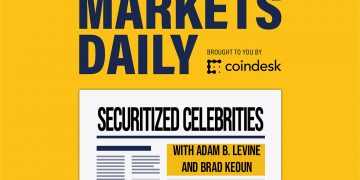 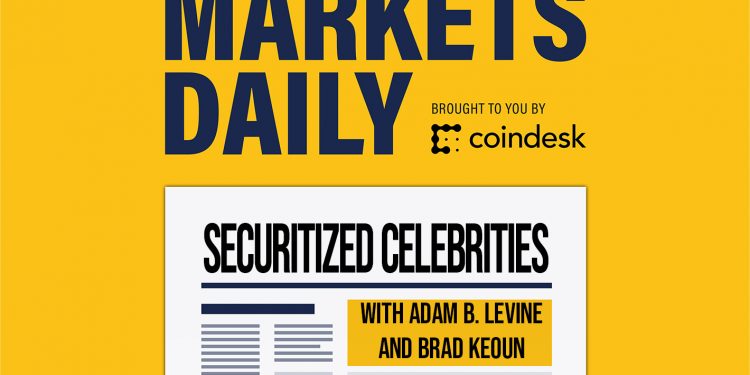 After years of discussion it looks like on Monday we’ll see our first high profile, professional athlete linked securitized token offering. Markets Daily is back with the story and what it could mean.

This episode featured a sound effect provided by http://soundsilk.com

Adam: It’s JANUARY 10, 2020, and you’re listening to Markets Daily, I’m Adam B. Levine, editor of Podcasts here At CoinDesk, along with our senior markets reporter, Brad Keoun, to give you a concise daily briefing on crypto markets and some of the most important news developments in the sector over the past 24 hours.

Brad: Bitcoin up slightly today after two straight day of losses, currently around $7900

CoinDesk’s Omkar Godbole reporting that the market is seeing price resistance around the psychological level of $8,000, and technical indicators are looking a bit more bearish than earlier in the week

CoinDesk’s Ian Allison notes that this could be a double-edged sword for the industry, driving up compliance costs and perhaps pushing away some customers, but potentially engendering more trust and confidence in cryptocurrencies among European banks and investors

Brad: And in what appears to be a related development, the Dutch crypto-derivatives exchange Deribit announced it will move its headquarters to Panama to escape tough new industry rules coming from European regulators

According to Deribit officials, new anti-money-laundering rules would require customers to provide an extensive amount of information, which makes the barriers to entry for the majority of traders too high, both from a regulatory and cost perspective

And Tether appears to have received a minor reprieve in court, at least on one front

Plaintiffs have withdrawn a class-action lawsuit filed in November in Washington state that accused that Tether and its affiliated Bitfinex exchange of issuing inaccurate information and monopolizing the bitcoin market.

Bitfinex had denied the accusation, saying it would contest any nuisance settlements

A Bitfinex spokesman declined to comment on the latest development

According to the report, the Lazarus Group, a cybercrime group with links to North Korea, uses Telegram to deliver malware that gets downloaded on a victim’s computer and then sends sensitive data to hackers

In Russia, a government-owned nuclear power plant is now renting out space to crypto miners

The Rosatom State Atomic Energy Corporation has opened a crypto mining farm near a nuclear plant some 200 miles northwest of Moscow.

The government entitty won’t mine bitcoin for its own account, but it will sell electricity to heavy users and reng space for their equipment

Brad: And our final story today is a real stinker

And you thought that Tether story smelled fishy, Adam

In partnership with crypto firm Paxos, NBA guard Spencer Dinwiddie is looking to raise $13.5 million by tokenizing the first year of his three-year, $34.5 million contract.

Dubbed the DREAM Fan Shares platform, investors in the securities offering will earn interest through Dinwiddie’s bi-monthly paycheck. The minimum buy-in is $150,000.

The guard for the Brooklyn Nets told CoinDesk that his contract is fully guaranteed, meaning investors do not risk losing their funds if he is injured or otherwise unable to play. He is set to earn $16 million this season, trading $2.5 million in earnings for the certainty of an upfront payment.”

After his plan met resistance from the National Basketball Association, the project underwent a number of changes which for the most part simplified it. TheAtheletic.com reported:

“Several obstacles emerged from the NBA’s perspective in its discussions with Dinwiddie — such as believing his plan was a “third-party assignment” and his third-year player option worth $12.3 million being an issue and violating anti-gambling rules.

Dinwiddie maintained that his player option is simply a performance-based incentive that has been tied to thousands of players — not a gambling angle — and that his investment vehicle actually encourages him to play as much as possible and perform well. So Dinwiddie edited his investment vehicle again, and instead of tying investors to his basketball-related income that option year, it would simply be a flat bond with no performance incentives.

The NBA came away from meeting with Dinwiddie that his career and the Nets are his primary priorities.”

Forbes reports on the details of the token being launched Monday...

“Dinwiddie is going to sell 90 securities-backed SD8 tokens, which can’t be traded for a year, for $150,000 apiece to verified accredited investors under SEC Regulation D, Rule 506 (c). What he created, he said, allows players to structure and issue debt instruments in digital token form to invest their money how they’d like. It would function as a decentralization of a personal loan to athletes through bonds they create with their guaranteed contracts as collateral.

The SD8 coin will be a three-year bond expected to pay out 4.95% base interest on a monthly basis— much better than you’d be able to get at a bank— with the full principal paid out at the end of the period upon maturity in a bullet payment.

The investment period will begin on Monday (January 13th) and end on Feb. 10, with the bond notes maturing and paying out in full on Feb. 10, 2023. According to a chart provided by Dinwiddie’s representatives, if all 90 coins were purchased, it would net investors just over $2 million over the course of the three years.”

What was a fringe idea even just two years ago is on the verge of going mainstream, and the NBA doesn’t even seem that concerned.

Even if you’re not a sports fan, this is exciting.  The conversation around these sorts of celebrity tokenizations started way back in 2014 and it’s taken us six years, more than half the time since bitcoin launched to get to this first real test of the concept.  And to be clear, it’s definitely not what we envisioned in those early days as the weight of organizational momentum at the NBA and government security requirements from the SEC squeeze the idea into something which only the richest among us can participate in, and even then only a maximum of 90 individuals can possibly own one of these tokens.

But, as it launches on Monday, whether or not it’s successful, it is undoubtedly significant.  In the race to tokenize the world, this could be an important tipping point, more on this story as it develops.

Adam: And now, for today’s spotlight, we’re looking at the giant U.S. money manager Fidelity’s reflections on bitcoin in 2019, and what appears to have been a banner year for the world’s oldest and largest cryptocurrency

Brad: Among large U.S. financial institutions, the giant money manager Fidelity has probably been the most publicly committed to crypto assets, jumping in with both feet while most banks and other firms await clarity on industry rules from regulators

And of course Fidelity has been a leader for a couple decades in the money management industry;

The boston-based company, led by Abby Johnson, one of the world’s richest women, now manages about $2.5 trillion for clients, and administers another $4 trillion or so for its customers

Well Ria Bhutoria is director of research for the firm’s crypto unit, Fidelity Digital Assets, and she published a long blog post Thursday outlining her reflections on bitcoin for 2019

She writes that in just a few years, bitcoin’s story has evolved criticially to recognize what she calls the true potential of its network – a new type of value transfer system, a tool for freedom, a savings technology and possibly more uses that we have yet to discover

Its potential cannot be ignored, she says

She notes that trading and investment on incumbent, regulated platforms is growing

One exchange, Bakkt, introduced options trading in December, and the rival exchange CME is set to follow with its own options menu starting on Monday

It’s also noteworthy that the popular merchant payment app Square has openly embraced bitcoin, especially with the support of CEO Jack Dorsey, who also has invested in Lightning Labs, which is working to develop key parts of the infrastructure of fast-growing crypto markets

Bhutoria concludes by saying that bitcoin continues to boast a dominant position in the crypto market, with growing usage and adoption

She adds that bitcoin has “unapologetically maintained its core properties as a border-less, censorship and seizure resistant, decentralized value storage and transfer system”

In short, Adam, these are all positive signs for bitcoin in her opinion, and she sees increasing adoption over the coming year, with continuing maturation of the network and its infrastructure