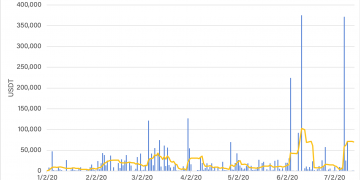 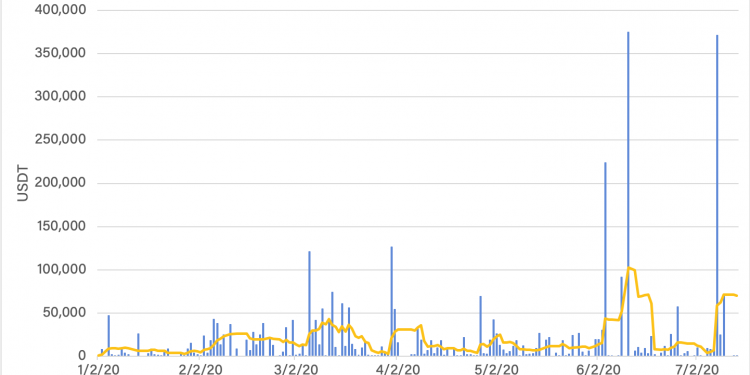 In Hong Kong, some local citizens are turning to crypto assets and encrypted communication to resist financial surveillance and internet censorship.

Hong Kong’s national security law, enacted on June 30, aims to quell opposition to China’s ruling Communist Party. The law has raised widespread fears of a clampdown on free speech and tighter control over the city’s financial system. Under the new law, the Hong Kong government will be able to freeze and confiscate assets from people or organizations that are suspected of being involved in national security crimes.

Data suggests people in Hong Kong are increasingly using stablecoins, which are digital tokens whose value is pegged to fiat currencies, as a way of keeping their assets independent of a banking system that is subject to government control.

As the chart above demonstrates, trading volume between Hong Kong dollars and the U.S.-dollar pegged stablecoin USDT saw a surge in early June on the fiat-crypto trading platform TideBit. The surge followed the decision to strengthen Hong Kong’s national security law, which was unveiled by Chinese legislators during the Two Sessions, the largest annual political gathering in mainland China. The second trading surge on the exchange followed the enactment  of the new law on June 30.

The data analysis by CoinDesk was based on a relatively small sample due to limited access to stablecoin trading volumes and the fact that many stablecoin purchases have been via over-the counter (OTC) trades in Hong Kong and mainland China. The trend could also be influenced by a handful of “whales,” or the investors holding a large number of assets, trading during these periods of time.

But the surge in the stablecoin trade could also signal Hong Kong citizens’ desire to protect their assets.

“Many people don’t believe they can trust the government or banks to keep their assets safe anymore,” said Brian Yim, a university student in the UK whose family is still in Hong Kong. Yim says people he knows are trying to buy crypto assets in Hong Kong. “If the Hong Kong police and government consider you as a national security suspect, they can seize your assets and even just take them,” he said

Cryptocurrencies could serve another purpose as well: fundraising for protestors. HSBC froze the bank accounts protesters were using to pay bail for arrested protesters last November.

Even before the national security law, stablecoins played a special role in Asia. Stablecoins such as USDT are a popular way to avoid capital controls and make cross-border money transactions less traceable. Mainland China citizens might use stablecoins in Hong Kong to make money transfers that exceed the yearly capital control of $50,000 that is imposed by the People’s Bank of China.

“The adoption of crypto in China, Hong Kong, Asia is very underground,” said Darius Sit, founder and chief investment officer of Singapore-based crypto firm QCP Capital, in a panel discussion at CoinDesk’s Asia Invest conference last September.  “If you go to Hong Kong, the money exchanges to trade tether are physically on the spot.” said Sit, whose company runs an over the counter (OTC) trading desk.

Sit said capital controls are one of the key characteristics differentiating Asian over-the-counter (OTC) trading desks from those in the West. OTC trading desks are a type of marketplace where the middleman matches traders with their counterparties with an agreed price as opposed to a centralized exchange where people trade cryptocurrencies based on the spot market price.

“While a western OTC desk may see 80% in BTC, ethereum and 20% in stablecoins trading, you flip it in Asia desks,” Sit said. “We trade a lot more tether, USDC, TUSD.”

In addition to concerns over the security of financial assets, the national security law also sparks fears of internet censorship and more extensive surveillance over personal data.

Chinese video app TikTok has decided to withdraw from stores in Hong Kong and make its services inaccessible to its local users.

Concern over increased Chinese control has been growing in Hong Kong for some time now. “Even before the law was enacted, people were deleting Facebook accounts and posts,” said Maya Wang, senior China researcher at Human Rights Watch. “People were moving off of WhatsAPP to Signal and they have become a lot more conscious about what they say on social media and securing their communication.”

“For someone who has worked both in China and Hong Kong, it is quite striking because people in Hong Kong didn’t have that level of fear in the past,” Wang said.

According to Wang, the most straightforward way to protect oneself is to choose a different communication tool, going from WhatsAPP or Telegram to Signal and not posting on Facebook.

“People stop using centralized messaging apps, such as Facebook’s WhatsAPP, because they fear that these companies may comply with Hong Kong authority’s requests for their private information and they believe that in the near future, the Hong Kong government might just ban these apps for not complying with them all together,” Yim said.

“Most protesters on the street are young people and they don’t really have this concern about things like their assets because they don’t have any and they are more focused on the privacy part,” Yim said.

Signal, the end-to-end encrypted messaging app, has become the most downloaded app in Hong Kong.

“Traditionally, when the Hong Kong government and companies collect your data, the expectation is that the data stays with that agency for the purpose in which the information is collected and it doesn’t travel and get integrated into other platforms,” Wang said. However, the police in mainland China share people’s data across platforms.

“The national security law does not let the police have that power either, but over time it would lead to the erosion of the data protection regime in Hong Kong. I think there is a certain danger of that,” Wang said.

More tech-savvy people would use virtual private networks (VPN), through which users can cross the “great firewall” and protect their identities on the Internet, Wang said.

VPN downloads in the Apple Store surged on the heels of Beijing’s announcement to enact the national security law. Seven out of 10 of the most downloaded apps, excluding games, are VPN apps. Still, China’s great firewall can recognize traffic from VPN services, so anonymizing user information is another step individuals can take. Here, too, crypto can play a role in helping Hong Kong residents keep their communications private.

Steven Waterhouse, CEO of VPN provider Orchid, said disguising the traffic as video data can obfuscate what users are doing online, and using crypto tokens to pay for services rather than bank-linked fiat accounts can help users protect themselves.

“Crypto could also help people in Hong Kong keep their communications private. The firewall can still recognize VPN traffic and prevent users from accessing blocked content,” he said. “The blockchain can in many ways be used to register the nodes as part of the network and enable payments between the users and the nodes that are providing the VPN services.”