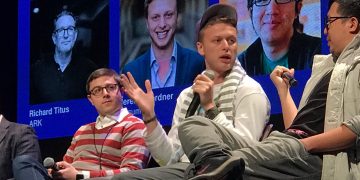 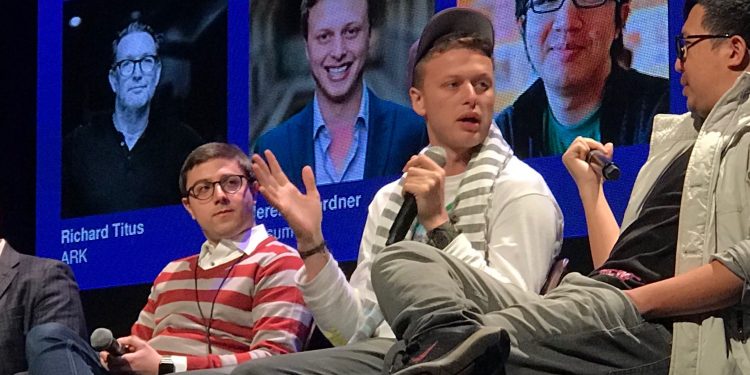 There was something both fresh and familiar about the NFT.NYC conference that non-fungible token developer PeopleBrowsr put on at the PlayStation Theater in Times Square last week.

It felt like some of the early bitcoin conferences: A little scrappy and rough around the edges, some wild ideas that ranged from practical to pie-in-the-sky, but in all exuding a great deal of enthusiasm for a novel blockchain technology that could spawn a variety of new business and philanthropic models.

It remains to be seen whether NFTs can get beyond the gimmick status they occupied in popular imagination since Dapper Labs launched CryptoKitties, the popular game that creates unique, collectible, breedable digital cats. There are questions about scalability and interoperability associated with ERC-721, the dominant, Ethereum-based NFT standard, and on whether the world will embrace outside-the-box ideas for redefining value, property and commerce.

As with bitcoin’s development, success or failure will depend upon the emergence of an impassioned community and ecosystem around the technology, and the vibe at NFT.NYC suggested this is happening.

What’s both interesting and challenging, though, is that the very notion of community in the NFT world is quite different from the one observed in fungible tokens such as bitcoin. Unlike a bitcoin, which is intended to be fully substitutable for any other bitcoin, a non-fungible token is a unique piece of digital property.

Thus, the community that assigns value to that asset can often be quite narrow.

Speaking with me on stage, Arnold Waldstein, who raised $140,000 for ocean conversation via the Honu project – a collectible CryptoKitty that was part turtle, part cat – noted that Honu became a compelling storytelling device with which to galvanize action among a specific community of people passionate about ocean health.

But at the same time, the structure and community makeup made it difficult to achieve fundraising goals under the initial proposal. The team eventually had to abandon an auction model and went for a one-off sale.

It’s challenges like that which have people questioning what kind of business model could function for NFTs. Thankfully, some compelling ideas for new models that address them bubbled forth at the event.

One key idea is that by attaching a smart contract that enshrines rights for the primary issuer of a token to future income from secondary market sales, creators of digital assets can be encouraged to relinquish control of them.

Venture capitalist David Pakman argued that the idea could lead NFT-embracing gaming companies to dramatically change their approach to how they make money. Such companies could deliberately create a limited supply of a particular digital artifact and ensure that they extract upside from future sales.

This way, rather than locking gamers into a walled garden of value capture, they can let their assets escape into the wider world, where they can generate greater value for the brand.

There was much talk of artists doing the same with otherwise unique, one-off works of art. As of now, an artist might sell a painting to a buyer for $10,000 but gain no benefit when a collector or a gallery subsequently buys it from that first buyer for, say, $1 million. If the work were indelibly associated with a unique NFT and a smart contract to manage future transaction rights, there could be a way for the original artist to participate in that future appreciation.

The approach could also enable payments for derivative works by creatives working with others’ original music or other artistic content. Or it could help charitable efforts like the Honu project, because the resale of the crypto-turtle-kitty to future buyers could continue to kick back funds to philanthropic cause it represents.

It’s these kinds of ideas that make the NFT conversation so engaging, enabling a break with pre-existing mental models so that innovators can conceive of creative new approaches to problems.

For now, much of it is highly intangible, though it was good to see NFT.NYC exhibitors such as Vault.io, which demonstrated the potential for redeemable NFTs to transform gift tokens, branding and commercial exchange by showing visitors how to redeem a token in their wallet for a cup of coffee delivered by a Raspberry Pi-enabled coffee machine.

The tension between community and economy

Still, the question remains whether the narrow community of interests attached to specific NFTs can generate enough liquidity to make them viable.

This will depend in part on the success of different blockchain community’s scaling initiatives and on interoperability solutions such as the Cosmos and Polkadot networks, which could enable NFTs to move across blockchains. If the entire world is to be “tokenized” with these unique digital markers, as some suggest will be the case, we have to get far beyond the clunky on-chain transaction-processing capabilities of Ethereum and its competitors.

It’s a vision worth fighting for because communities are the breeding grounds for all notions of value. If you can tap into them, you can drive adoption. To achieve that, developers must consider that each community is unique: the things they value, the contracts their members enter into, and their preference for how to govern themselves aren’t necessarily served by anchoring themselves into monolithic blockchains with rigid programming logic.

It’s why, in addition to NFTs, other projects are working on community-based digital asset issuance models that don’t depend on an underlying chain or virtual machine such as Ethereum to process all transactions.

These include Intercoin, perhaps best known for now by a prominent hand-painted mural that greets motorists on the Gowanus Expressway heading into Manhattan from Brooklyn, and the colorfully named Economic Space Agency that was set up in Oakland, California by a group of radical economists, technologists and other social scientists.

The common idea in these concepts is that the smart contract-features, the terms attached the token, and the consensus model can be designed uniquely according to each community’s preferences. Whether they can be secure from attack and sufficiently liquid is the question.

In all of this, there is tension between the narrow, subjectivities of a distinct community’s expressions of value and the requirement to interface that otherwise closed subset of interests with a more universally accepted expression of value in the wider economy – in other words with fungible, negotiable instruments such as bitcoin or dollars.

It’s in confronting those tensions and figuring out the best business models to overcome them that NFTs and their ilk have the best chance of enabling practical, real implementations that can have a marked impact on the world. The more that those who are working on them come together and explore the prospects, the greater the chance of success.