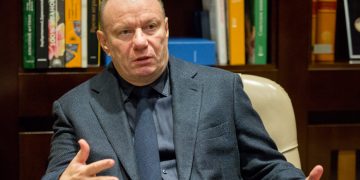 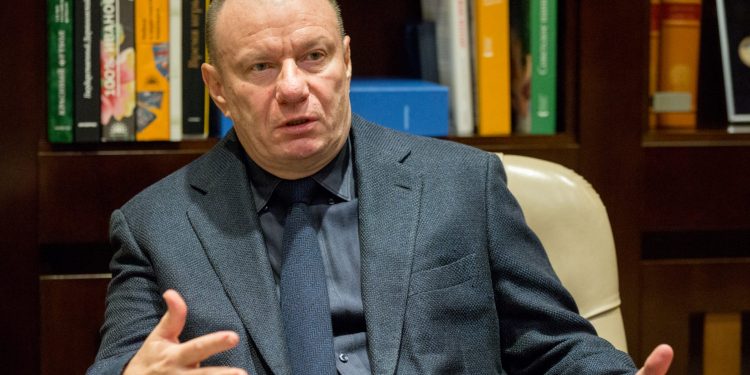 Vladimir Potanin is used to dealing in hard realities.

The billionaire oligarch started his business empire in the Wild East days of the 1990s, when the assets of the old Soviet Union were up for grabs and opportunistic entrepreneurs could make mega-roubles if they were in the right place at the right time.

The son of a foreign trade official, Potanin authored the infamous loans-to-shares program that allowed a group of businessmen to buy Russia’s key industrial entities cheaply, later becoming the richest people in the country. He went on to build Norilsk Nickel (Nornickel), one of the world’s largest producers of palladium and refined nickel.

Potanin’s wealth is made of metal. But last week, sitting in a luxury New York hotel, his mind was on more immaterial things – like digitized tokens and distributed ledgers.

Looking relaxed in a polo shirt and blazer, Potanin, now 58, discussed how to represent metals as digital assets (built with IBM), streamline his business with distributed databases (built on Hyperledger), and give investors new ways to participate in his business. He wants to get more Russian enterprises thinking about how to use blockchain technology.

A curious detail: an avid ice hockey player who is known for playing with Russian President Vladimir Putin in amateur games, Potanin once invested in a hockey analytics startup founded by a friend of Buterin’s father.

While Potanin hasn’t met Buterin in person, he heard Vitalik speak about blockchain and was intrigued, he said:

“The knowledge of what he is doing and what he has achieved, of course, encouraged me that the young generation is moving in that direction. [I thought] I should be aware of what they’re doing and why, and I should benefit from this experience.”

After learning more about blockchain he reasoned that Nornickel could benefit from adopting its principles, for instance using distributed databases for managing internet-of-things data from his smelting operations.

At the same time, Nornickel is also issuing its own token, providing a new, more flexible way of managing sales contracts, Potanin says, and a new way for investors to participate in the company’s operations in Northern Siberia.

“We are trying to digitize all our sales contracts because it looks more efficient, transaction costs are lower and it adds flexibility for our clients,” Potanin said. Sometimes Nornickel’s clients, like auto companies, might order too much palladium and need to renegotiate their contracts and buy less than they initially ordered. He says that’s easier to manage if the contract is tokenized.

“If you don’t need a certain amount of material you can split a token in parts and sell it to other clients. And for us, nothing changes: we ship palladium and clients get as much as they need.”

The tokens will be backed either by Nornickel’s guarantee to ship the actual tons of metal or by special metal accounts in a bank if a buyer doesn’t need palladium itself, Potanin adds.

This summer, the company joined Hyperledger, a blockchain consortium led by the Linux Foundation. The token is built on Hyperledger Fabric and supported by IBM. (The tech giant was not able to respond to requests for comment by press time).

Nornickel is also planning to launch a marketplace where its token and similar asset-backed tokens issued by other companies would be traded. Potanin says the palladium token will be available not only to funds and asset managers but also to retail investors:

“For example, you see palladium is going up, but you can’t go to Norilsk Nickel and buy palladium for several million dollars,” Potanin said. “Say, you have $500 in your pocket, and you want to bet on the price of palladium. You enter our platform and get a little portion of palladium in a tokenized form.”

Not everyone wants to buy into a company when what they really want is exposure to an underlying commodity, Potanin said:

Asset-backed tokens can be especially attractive for traditional businesses as they may attract money from crypto investors, Potanin said.

Preston Byrne, a lawyer and astute observer of the blockchain and cryptocurrency fields, believes there will be demand for the kind of commodity speculation Nornickel is enabling with its tokenized palladium.

“If you’re buying palladium in a vault versus buying shares in Norilsk Nickel, those are different assets with different risk,” Byrne said. “Especially if palladium is stored in Switzerland instead of Russia where you have seen the extraction of oligarchs if they run afoul of the regime.”

Nornickel is preparing to launch the token using entities the company is setting up in the U.S. and Switzerland.

“We decided not to take any reputational risks and to be 100 percent regulated,” Potanin explains. “We’re making sure we’re in alliance with the regulators of both countries. We will need both the U.S. regulators’ decision and FINMA’s approval in Switzerland to launch.”

In Russia, Nornickel is in “very advanced discussions” with the central bank to launch a pilot project to tokenize other goods, from airplane tickets to shipping containers. (The Bank of Russia did not respond to a request for comment by press time).

Potanin helped write the legislation for digital assets in Russia as a member of a blockchain working group within the Russian Union of Industrialists and Entrepreneurs, a lobbying group formed by the country’s largest industrial players.

The bill is making its way through Russia’s parliament and Potanin is confident it will pass.

“I hope it will go through the parliament without delay, and I understand that I can start my experiment in Norilsk with the frame of this legislation and under the control of our regulator.”

Potanin says he is not particularly interested in cryptocurrencies like bitcoin and ether and didn’t invest in them. He calls bitcoin “a toy” and “a useful souvenir,” but says the issuance of electronic money should be left to central banks.

“I agree with the American regulator that it is a commodity and the quality of this commodity — you really do not know if it’s good or not, you buy it at your own risk,” he added.

But he is enthusiastic about the future of asset-backed tokens like the one Nornickel is preparing, as their usefulness goes beyond speculative value, motivating people to learn about the digitized commodities they will be trading:

“People like different kinds of bets, on football or boxing matches, for example. My idea is to encourage people to bet on something real and to learn something: what’s going on with oil, with metals, with ecological programs, what is the behavior of consumers.”

Given Potanin’s high profile (and government connections), some might wonder if Nornickel token projects are an elaborate way to skirt sanctions imposed on Russia by the U.S. and Europe (on the thinking that the tokenized metals markets are less heavily policed than other financial arenas).

But Potanin dismisses the idea. Neither he nor Nornickel has faced any direct sanctions from the West so far.

“For me personally, I don’t think it’s a good protection because sanctions go much further than your ability to have an account in a bank,” he said, adding:

“What makes me really anxious is that people may change and are already changing their attitude towards Russians. Doesn’t matter if it’s true or not, people start thinking, ‘maybe I shouldn’t deal with a Russian guy because who knows whether he’s under sanctions or what happens to him.”

He added that he doesn’t believe this attitude will stop his blockchain project, though:

“In this system that we have now in the world, digital initiatives, high tech and ecological initiatives are the last ones to be attacked and compromised. It’s not a remedy, but I think it’s good to go in that direction.”

UK Finance Watchdog's Crypto Investigations Up By 74% in 2019