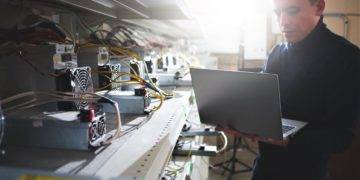 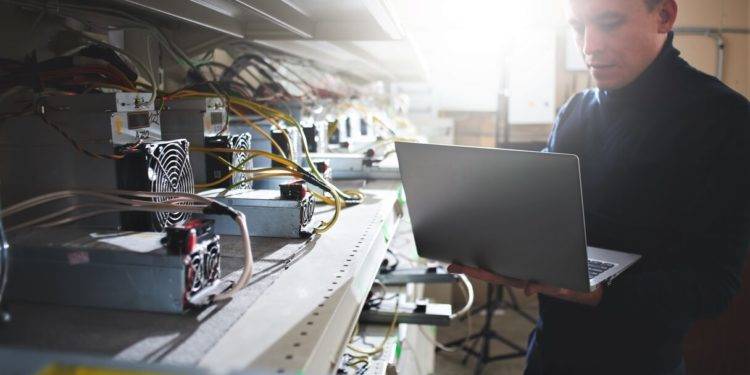 Cryptocurrency mining and especially bitcoin mining is a multibillion-dollar industry. In April alone, when bitcoin (BTC) reached an all-time high of about USD 65,000, bitcoin miners produced nearly USD 3 billion in revenue through the selling of coins obtained through block rewards or transaction fees.

Such statistics would lead the majority of people to believe that Bitcoin mining is now largely the domain of large organizations, commercial entities with the financial means to invest in the construction of large plants capable of commanding a sizable portion of Bitcoin’s massive hashrate, or computational power.
However, opinion on this subject is extremely divided, with at least one miner – known on Twitter as burn the bridge (@econoalchemist) – recently stating that individuals may profitably mine BTC from the comfort of their own homes.

He explained that anybody can earn money at home by joining a pool, even with relatively inexpensive ASIC miners. On the other side, mining businesses claim that Bitcoin mining will stay out of reach for the great majority of people and that the majority of people would be better off investing in a mining corporation to share in its earnings.

In a mid-July post, econoalchemist, a US-based Bitcoin community member, revealed that it is possible to earn money mining Bitcoin at home, at least if you live in the United States and in an area with relatively cheap electricity costs. He specifically mentioned that it is more cost effective to mine bitcoin yourself rather than acquiring it directly with USD.

He stated to CoinNewsDaily that, contrary to popular belief, mining Bitcoin at home is doable for the typical US person.

“Several ASIC distributors are located in the US, most homes have an abundant power capacity, and the average kWh rate is USD 0.13,” he said.

According to econoalchemist, an individual with a modest 80Th ASIC mining equipment operating at a USD 0.13/kWh rate can acquire BTC for 57% less than the current market spot price.

Econoalchemist pointed out that anyone interested in mining can choose from a variety of more affordable gear solutions.

He said that the majority of investors will earn a return on their initial investment in both USD and BTC within around a year, all other factors being equal.

“Numerous variables, such as overall network hashrate, network difficulty, kWh rate, BTC market price, upfront costs, and infrastructure needs, all play a role in these considerations, and they are always changing. However, for the ordinary US resident, there is a large gap between how low the price of bitcoin may go and how high the network hashrate can go before mining at home becomes uneconomic,” he explained, noting that he discussed these points in further depth in a July essay.

Not only is mining Bitcoin at home (through a mining pool) less expensive than purchasing it directly, but mining also allows for the acquisition of BTC without having to comply with know-your-customer (KYC) rules.

“These restrictions compel users to associate their personally identifiable information with their Bitcoin activity, exposing them to several hazards such as third-party data breaches, unrealized capital gains tax, and 6102-style seizure. While mining Bitcoin at home mitigates these KYC-related risks, there is another benefit: the average US resident may obtain more bitcoin for their money by mining it at home than than purchasing it through a riskier DCA [dollar-cost averaging] service,” econoalchemist explained.

Not everyone feels that the best strategy for individuals is to mine Bitcoin at home.

“Bitcoin mining is becoming increasingly out of reach for the majority of home-based businesses. Due to the scarcity of new equipment, energy, and infrastructure, home miners will be forced to rely heavily on secondhand equipment and colocation facilities,” said Zach Bradford, CEO and President of CleanSpark, a Nevada-based energy technology and clean Bitcoin mining startup.

Bradford also stated that when mining difficulty rates climb and competition for block rewards intensifies, it will become increasingly difficult for home-based miners to earn a profit. He admitted that while some miners may perform pretty well, the majority will be priced out of the mining business on average.

“I could imagine a scenario where someone is able to use stranded or excess renewable energy to increase access and bring down the cost of energy but competitive mining machines would still be too expensive for most home-based operations,” he told CoinNewsDaily.

Putting these reservations aside, not everyone in the mining sector believes that Bitcoin mining is out of reach for the average home-based individual.
According to BitRiver CEO and creator Igor Runets, individuals that join a pool enhance their chances of making mining lucrative.

“While the majority of our clients are institutional mining enterprises, some are actually pools of people who pool their resources to obtain bulk pricing from both machine vendors and the datacenter that hosts those machines. Individuals with limited resources can also join such pools to maximize their resources,” he told CoinNewsDaily.

Opinions are also divided on whether home-based mining has declined in recent years or is seeing a minor renaissance as awareness of its possibility grows.

“It has been dropping in lockstep with the expansion of major, well-funded companies mining across the globe […] Mining equipment has become so specialized that it is frequently beyond of reach of do-it-yourselfers and at-home miners,” Bradford explained.

On the other hand, econoalchemist asserted that, based on his personal observations since the end of 2020, home mining has actually increased.

“Up until [Bitcoin blogger/expert] Diverter wrote Mining For The Streets the narratives around home mining were negative; ‘It’s too expensive to mine at home,’ ‘You can’t compete with industrial-sized miners,’ ‘You would be better off buying bitcoin from an exchange.’ Well, Diverter absolutely shattered those narratives and mopped the floor with them,” he said.

Since reading Diverter’s post, econoalchemist has authored his own guide to home mining, which he claims has aided in the dissemination of mining information and given individuals the confidence to handle common mining difficulties (e.g. excessive noise and heat) on their own.

“Fast forward to today, and there is Steve Barbour developing the black box enclosure, Matt Odell demonstrating home mining on his Citadel Dispatch podcast (Episodes 31 and 38), and companies like CoinHeated pushing immersion cooling to the next level,” he explained.

Igor Runets, who takes a position in the middle of both poles, stated that while home-based mining has increased in tandem with the popularity of cryptocurrencies since Bitcoin’s debut, industrial-scale mining has expanded significantly quicker and now accounts for the majority of Bitcoin mining globally.

Additionally, a new service was launched this week by Compass Mining, an online marketplace for Bitcoin mining hardware and hosting based in the United States. At-Home Mining is a direct-to-consumer business that allows consumers to purchase Bitcoin mining equipment for their homes and have an ASIC mining machine delivered to them, allowing customers to mine Bitcoin without incurring additional hosting facility expenses.

Some tips for would-be home miners

If you decide to try your hand at home mining, there are a few things you should keep in mind.

To begin, join a mining pool, as mining solo makes it incredibly unlikely to locate a block.

“I like SlushPool because it is extremely quick to set up, they have a fantastic mobile app that allows me to monitor my ASICs on the go, and they are not a member of the Bitcoin Mining Council. By joining a pool, you’ll see daily mining benefits trickle in,” econoalchemist explained.

Second, you should be aware that scammers may attempt to capitalize on your enthusiasm for mining hardware. Fortunately, there are a few additional trustworthy methods via which you can obtain equipment.

“Use the Telegram channel Hardware Market Verified Listings. MineFarmBuy and Kaboom Racks are both trustworthy wholesalers who frequently publish advertisements on their websites. Even if the advertisement has a Minimum Order Quantity (MOQ), do not be afraid to contact the seller; they will frequently combine many modest orders to meet their MOQ,” econoalchemist stated.

Zach Bradford, on the other hand, said that the majority of individuals would be better off investing in a reputable mining firm.

He says, “Do your research. Find a company that fits with your values […] Setting up at home is probably prohibitive for most people at this point. But there are many ways to be involved in building and supporting the Bitcoin blockchain.”