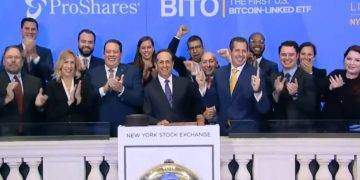 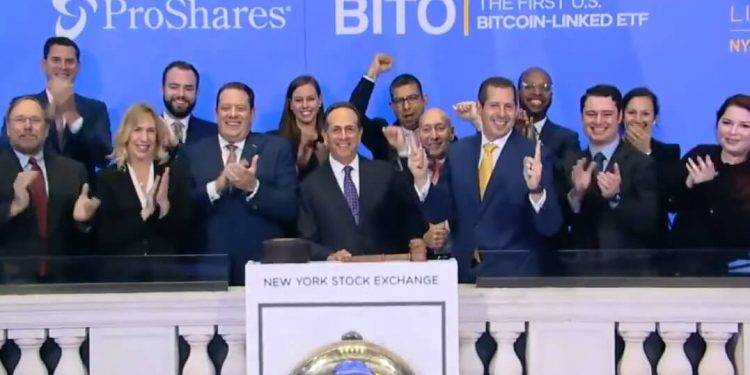 The ETF, which trades under the symbol BITO, was launched by ETF issuer ProShares on Tuesday at 09:30 EDT (13:30 UTC), with executives from ProShares ringing the New York Stock Exchange‘s opening bell.

As soon as the market started, the ETF’s price soared, surging about 1.4 percent in the first five minutes of trading. The ETF’s initial trade occurred at a price of USD 40.99 per share, reaching above USD 42 before correcting to the downside.

At 13:47 UTC, just after the ETF launched, the CME bitcoin futures contract for October delivery was trading at USD 63,855, about USD 1,000 above the Binance spot price of bitcoin. The futures market has increased by as much as 3.3 percent in the last hour, while Binance’s spot price has increased by only 1.7 percent.

At 16:20 UTC, less than three hours into the Wall Street trading day, the enormous gap between the spot and futures markets had narrowed, with CME futures trading USD 400 higher than the Binance spot price.

Simultaneously, the BITO ETF traded at a price of USD 40.92 per share, down around 2.8 percent from the day’s opening deal. Bitcoin was trading at USD 62,540 on Binance, while bitcoin futures on CME were trading at USD 62,940.

With nearly USD 1 billion in activity, BITO’s debut was second only to a BlackRock carbon fund for a first day of trading, the latter of which ranks higher due to pre-seed investments, according to Bloomberg Intelligence‘s Athanasios Psarofagis.

The creation of a bitcoin futures exchange-traded fund (ETF) has garnered extensive attention in recent days, with some experts speculating that it could contribute to growing premiums on bitcoin futures sold on the CME relative to spot pricing on crypto-native exchanges. As a result, the ETF has reignited interest in the so-called bitcoin basis trade, in which arbitrage traders profit from the price differential between the spot and futures markets for bitcoin.

Balchunas later stated that the ETF has now attained a trading volume of more than half a billion US dollars, making it one of the year’s largest ETF debuts by volume.

Sebastian Markowsky, Chief Strategy Officer at bitcoin ATM operator Coinsource, told CoinNewsDaily that the ETF is “critical for bitcoin adoption,” given that many financial institutions are unable to hold bitcoin directly.

“There is a massive amount of capital waiting to receive exposure to Bitcoin through those instruments,” Markowsky said, adding that the significance of this capital acquiring exposure “can hardly be emphasised.”

Simeon Hyman, global investment strategist at ProShares, also commented on the ETF’s launch today, telling Bloomberg TV that he expects the ETF would enable many individuals to own bitcoin “in a reliable and robust way.”

Additionally, the financial strategist justified the firm’s decision to back the ETF with futures contracts rather than ‘real’ bitcoins, stating that the CME futures market has “tremendous volume” and that backing it with futures is “not a second-order choice.”

Hyman described the bitcoin futures-backed ETF as “a first-class and convenient approach” to gain exposure to bitcoin, noting that it represents “a watershed moment in the broader bitcoin ecosystem.”

“You have to be in a tradeable vehicle, such as an ETF,” Minerd stated as the primary reason for the ETF’s creation. He noted that many institutional players will not retain bitcoin directly, both for regulatory reasons and because “if you simply keep your bitcoin in your wallet, it might be stolen.”

Additionally, the investment manager, who has gained notoriety in the bitcoin community for setting unrealistic bitcoin price projections ranging from USD 400k to 600k, reaffirmed his stance that “money is something that society generates, not governments.”

“If you want to invest in cryptocurrencies, now is certainly a good time,” the asset manager concluded.

The introduction of the first bitcoin ETF in the United States was also discussed in Tuesday’s State of the Network report from Coin Metrics, which stated that on-chain indications indicate that “bullish conditions have returned” to the bitcoin market.

“A significant catalyst in the recent run-up has been fresh discussion of a bitcoin ETF being allowed in the United States,” the study stated, adding that interest has now shifted to the possibility of an imminent ‘physically’ backed spot ETF in the United States.

“Competition for the first US-approved bitcoin spot ETF is at an all-time high, with significant firms such as Bitwise declaring intentions for an ETF in recent weeks and Grayscale reiterating their intention to turn their Trust into an ETF. Q4 is shaping up to be a banner quarter for bitcoin ETFs, with a lengthy list of SEC ETF decisions (both spot and futures-based) pending,” the research stated.