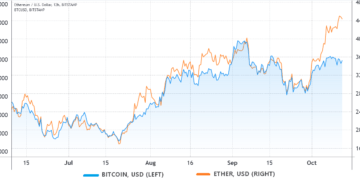 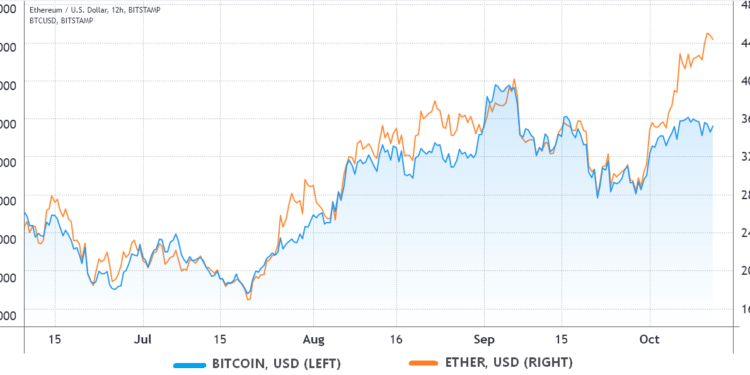 The price of Ether (ETH) has lagged behind the price of Bitcoin (BTC) by 13 percent so far in October, but is this significant? To now, the altcoin has surpassed Bitcoin by 274 percent in the year 2021, according to CoinMarketCap. While traders are notoriously short-sighted, some will doubt whether the Ethereum network can successfully switch to proof-of-stake (PoS) validation and, as a result, resolve the issue of high gas fees for the foreseeable future.

Moreover, the increasing competition from smart contract networks like Solana (SOL) and Avalanche (AVAX) have been worrying investors:

One big problem with the “ETH is ultra sound money” meme is that EIP-1559 only limits the supply of ETH if Ethereum continues to have lots of transactions. It’s just as possible that people will tire of $80 gas fees and opt for one of numerous alternatives (SOL, AVAX, etc).

The recent discussion surrounding the potential approval of a Bitcoin exchange-traded fund (ETF) increased traders’ interest in bitcoin (BTC) in general.
The Securities and Exchange Commission (SEC) of the United States is likely to publish its verdict on a number of exchange-traded fund (ETF) requests in the coming weeks. However, there is still a chance that the regulator will decide to postpone these deadlines.

Pro traders are unfazed by the recent price stagnation

One should begin by examining the futures premium, also known as the basis rate, in order to ascertain whether or not experienced traders are inclined to be pessimistic. This indicator indicates the difference in price between the prices of futures contracts and the prices of conventional spot market commodities.

Whales and arbitrage desks prefer to trade ether’s quarterly futures contracts because they are the most liquid. Because of their settlement date and price difference from spot markets, these derivatives may appear confusing to retail traders; nonetheless, their most significant advantage is the absence of a variable funding rate.

The three-month futures contract normally trades with an annualised premium ranging from 5 percent to 15 percent, which corresponds to the stablecoin lending rate. Sellers increase their demand for a higher price as a result of delaying settlement, which results in the price discrepancy.

As shown in the chart above, Ether’s inability to break over the $3,600 resistance level has not resulted in a change in the sentiment of professional traders because the basis rate remains at a solid 13 percent. This demonstrates that there isn’t an excessive amount of optimism at the present.

Retail traders have been neutral for the past five weeks

Retail traders are more likely to use perpetual contracts (inverse swaps), in which a fee is imposed every eight hours to balance the demand for and supply of leverage. To determine whether or not there was any panic selling, one must look at the funding rate of the futures markets.

In neutral markets, the financing rate typically ranges from 0 percent to 0.03 percent on the positive side, with a maximum of 0.03 percent. In terms of percentage points every week, this cost is equivalent to 0.6 percent, which suggests that longs are the ones that pay it.

The lack of significant evidence of high leverage demand from either bulls or bears since September 7 has been a source of consternation. It illustrates retail traders’ lack of desire for leveraged long positions, while also demonstrating a lack of panic selling or undue anxiety. In short, the situation is balanced.

The recent underperformance of Ether in comparison to Bitcoin is not causing concern among investors, according to the derivatives markets. A positive spin should also be given to the fact that there has been no undue long leverage following a 274 percent rise year to date.

Market participants in Ether appear to be preparing for a rally above its all-time high by allowing for some bullishness without jeopardising the derivatives market structure. This is especially true if a Bitcoin ETF is approved.