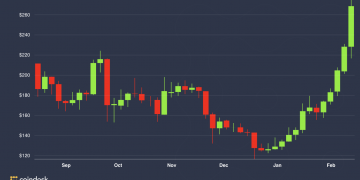 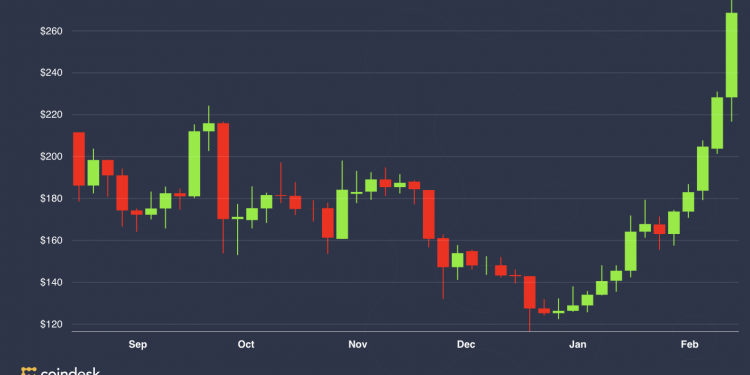 As its price rose to seven-month highs on Wednesday, the aggregate daily volume in ether futures exceeded $4.5 billion for the first time since June 27, 2019.

Volumes have risen sharply over the past three weeks from $750 million to above $4.5 billion, according to data from Skew Markets. During that time, ether’s (ETH) price rallied by nearly 70 percent, from $160 to $280.

The surge in trading volumes and prices shows renewed interest in ether and alternative cryptocurrencies in general, as a large amount of altcoins are built on ethereum.

“It seems the market has been gradually warming up and willing to revisit altcoins this year after a long sequence focusing on bitcoin and upcoming halving,” Emmanuel Goh, co-founder and CEO of Skew Markets, told CoinDesk.

While bitcoin, the top cryptocurrency by market capitalization, gained over 90 percent in 2019, ether fell 1 percent.

The tide has now turned in favor of ether this year, according to Goh. The second-most valuable cryptocurrency has doubled in price since Jan. 1, while bitcoin (BTC) is lagging, with 41 percent gains.

Three big exchanges – BitMEX, Huobi and OKEx – each traded more than $1 billion worth of ether futures on Wednesday, accounting for nearly 85 percent of the total volume.

The recent rally in ether’s price is also backed by a solid rise in the open interest, the number of open futures contracts.

Aggregate open interest hit a record high of $750 million on Wednesday, an increase of over 130 percent from the Jan. 1 figure of $320 million.

For those following technical indicators, a rise in open interest along with price is said to confirm an uptrend.