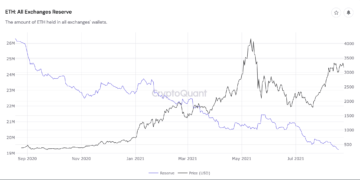 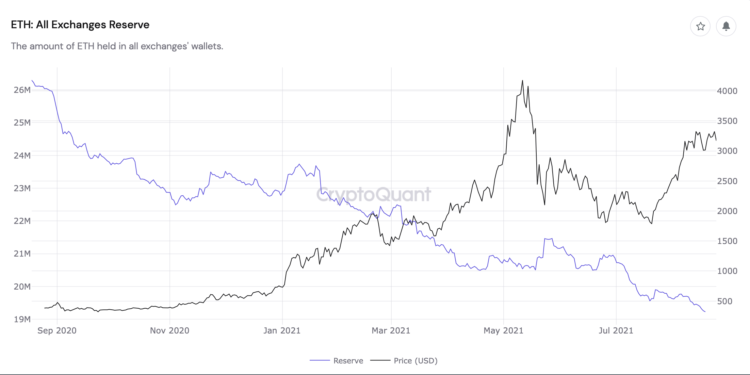 All cryptocurrency exchanges have seen a significant decrease in the amount of Ether (ETH) they hold over the last year.

CryptoQuant, a blockchain analytics company, stated that Ethereum reserves on trading platforms fell from 26.29 million ETH to 19.22 million ETH year-on-year (YoY), showing that traders’ inclination to keep their tokens has increased over time.

At the very least, the performance of the Ether price over the same time period suggests the same thing.. By press time, the ETH/USD exchange rate had increased by a little more than 730 percent — from $407 to $3,190 — signaling that there is no consistent relationship between the pricing of Ethereum tokens and their reserves across all cryptocurrency exchanges.

In more detail, traders who intend to trade cryptocurrency assets in the near future often prefer to keep their crypto assets in exchange wallets. Otherwise, they shift those assets to private wallets so that they may maintain control over their own keys, a practice that derives from their anxieties of losing funds as a result of hacks and other security breaches at cryptocurrency exchanges.

The amount of ether in circulation has plummeted.

In addition, an on-chain indicator developed by CoinMetrics to measure the overall quantity of Ether deposits to exchanges raised the alarm about the general state of Ethereum traders’ holdings. There was a 21.11 percent drop in ETH deposits across all trading platforms, from 413,772 ETH to 326,408, according to the report.

ETH deposits, on the other hand, have declined drastically in the last 30 days, by 47.81 percent, indicating that many investors anticipate higher prices in the long run.

Meanwhile, the total number of unique addresses holding any amount of Ether has increased by 1.67 percent in the last 30 days, corresponding with a 42 percent increase in the value of the cryptocurrency against the US dollar during the same period.

On a year-over-year basis, the number of unique addresses has increased by 30.87 percent.

The positive mood about holding Ether has gained steam in the days leading up to and following the historic Ethereum network upgrade on August 5, 2021. The London Hard Fork, as it was known at the time, was a software update that implemented a proposal known as EIP-1559, which enabled gas fee burning on the Ethereum network.

As a result, there has been an increase in deflationary pressure. According to WatchTheBurn.com, in the first 20 days following the launch of EIP-1559, the network has burned about 92,595 ETH, which is worth around $295.85 million.

Related: Ethereum’s “liquidity crisis” might lead to a new all-time high in ETH before Bitcoin, according to one analyst

More Ethereum urged individuals to deposit 32 ETH in order to become a validator on its planned proof-of-stake blockchain, which resulted in the depletion of the active supply of Ether. According to Beacon Chain, the so-called Ethereum 2.0 smart contract has attracted a little more than 6.9 million ETH, which is equivalent to almost $22 billion.

Demand for Ether is also increasing as the Ethereum ecosystem continues to expand, which now includes projects from the burgeoning decentralized finance (DeFi) and nonfungible token industries, among others.

Lyn Alden, the founder of Lyn Alden Investment Strategy, described the London upgrade as a “tactically bullish” event last week, suggesting that it could easily increase the price of ether against the dollar to over $5,000.

Unless otherwise stated, the thoughts and opinions expressed here are exclusively those of the author and do not necessarily reflect the views of Cointelegraph.com or its subsidiaries. Risk exists in every investment and trading decision; therefore, before making a decision, you should conduct your own study.

How To Earn Crypto