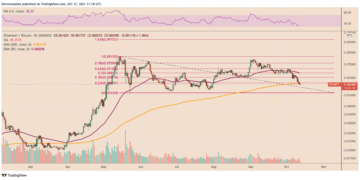 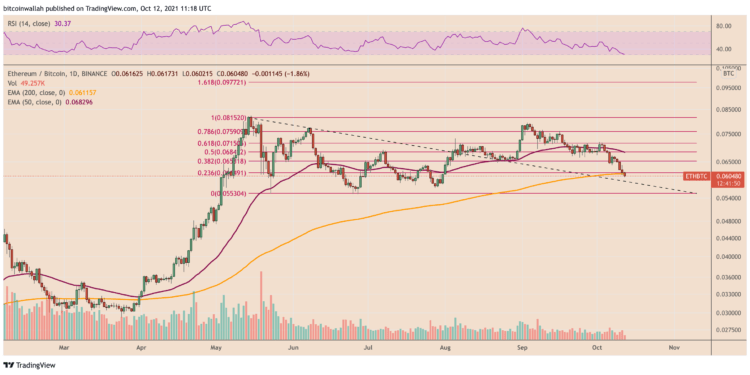 Additionally, the decline pushed ETH/BTC below one of the pair’s longest-standing support levels, the 200-day exponential moving average (200-day EMA; the orange wave), as illustrated in the chart above. This increases the danger of further downside, with the next possible goal being 0.055304 BTC.

This indicates that more capital has been invested in Bitcoin than in altcoins thus far in October.

The ascension of Bitcoin coincided with hopes that the US Securities and Exchange Commission will approve four Bitcoin-based exchange-traded funds (ETFs) within weeks. Global X Bitcoin Trust, Valkyrie XBTO Bitcoin Futures Fund, WisdomTree Bitcoin Trust, and Kryptoin Bitcoin ETF are among the applicants.

Gary Gensler, chairman of the Securities and Exchange Commission, hinted at a hopeful conclusion for Bitcoin ETFs, despite the SEC rejecting identical petitions for eight consecutive years. However, Gensler observed that the Bitcoin ETF applicants this time filed under the Investment Company Act of 1940, which provides greater investor protection.

Additionally, the SEC approved a third crypto equities ETF. The Volt Crypto Industry Revolution and Technology ETF (BTCR) will invest in companies that have a majority of their net assets in bitcoin or earn a majority of their revenue from bitcoin mining, lending, or transacting.

I don’t think people are fully prepared for how insane the markets will go once we get a #bitcoin ETF approved!

Thus, speculation about the legalisation of Bitcoin ETFs appears to have increased traders’ interest for the top cryptocurrency in recent days, with BTC outperforming its closest rivals, including Ether.

Nonetheless, Ethereum has a robust decentralised application ecosystem and continues to be a driving force in the developing decentralised finance and nonfungible token industries.

According to David Gokhshtein, founder of Gokhshtein Media and PAC Global, Ethereum’s healthy network effect might propel Ether above $10,000 by the end of the year. Meanwhile, the continued supply constraint in the Ether market should continue to be a big talking point for bulls in the coming months.