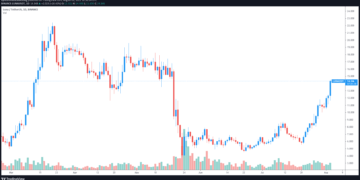 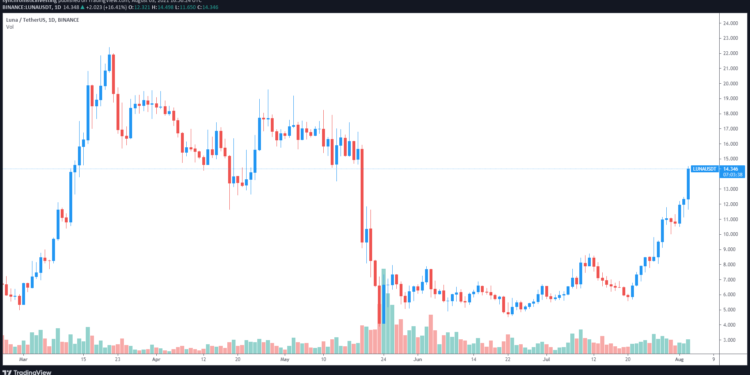 Although the price of bitcoin (BTC) appears to have fooled investors with its move to $42,000 last week, altcoins with strong fundamentals and real-world applications are gaining traction while the digital asset struggles to hold above $38,000.

It is one of these projects, Terra (LUNA), which is a blockchain protocol that supports the fiat-pegged TerraUSD (UST) stablecoin, that has managed to buck Bitcoin’s downward trend and climb higher since the beginning of August.

Price of LUNA has increased 162 percent from a low of $5.53 on July 20 to an intraday high of $14.51 on August 3, according to data from Cointelegraph Markets Pro and TradingView. The cryptocurrency’s 24-hour trading volume has increased from $137 million to $774 million during that time period.

LUNA’s rapidly expanding ecosystem, the addition of a wrapped form of Ether (ETH) to the Anchor protocol, which brings Ether staking rewards to the Terra ecosystem, and the protocol’s tokenomics, which assist in controlling the circulating supply of LUNA and UST, are all factors contributing to the increase in interest.
In the cryptocurrency world, LUNA (LUNA) is a cryptocurrency with a rapidly expanding ecosystem.

One of the most visible signs of the Terra ecosystem’s growing popularity is the rapidly expanding list of partners and projects that are launching on the Terra blockchain platform.

The developing ecosystem provides access to some of the most exciting sectors in cryptocurrency, such as decentralized finance (DeFi) and nonfungible tokens (NFT), as well as bridges to other blockchain networks, such as Ethereum and Solana, which are currently under development.
There are a variety of retail and payment protocols supported by the blockchain, which allows token holders to use LUNA and UST to make everyday purchases with their coins.

Stablecoin support is currently available for 17 fiat currencies, including the U.S. dollar, the European Union euro and the Canadian dollar, with plans to expand this list as the ecosystem develops.

Another factor contributing to the bullish price growth in LUNA is the ongoing vote on the Anchor protocol, which would allow wrapped Ether to be added to the platform in order to mint UST.

The integration is enabled by a partnership with Lido, an Ethereum and Terra staking protocol that enables stakers to receive liquid stETH (staked Ethereum) and bLUNA (bonded LUNA) tokens.

If the vote passes, Ether will become the first collateral option to accept staking rewards from outside the Terra ecosystem, boosting the protocol’s total value locked to a new all-time high.

The tokenomics of the protocol, as well as the use of LUNA to mint UST, are two other factors contributing to the increase in demand for LUNA coins.

It is necessary to burn an equivalent amount of LUNA in order to mint new UST, and this has an impact on the supply and price of LUNA as a result.

With the growth of established platforms such as Mirror Protocol, which require more UST to bootstrap the platform, and the introduction of new protocols on the Terra network, an increase in demand has the potential to result in price increases for LUNA and UST.

Higher demand for UST typically results in its price rising above $1, creating arbitrage opportunities for token holders who can purchase $1 of LUNA on exchange and burn it via Terra Station for 1 UST, despite the fact that the price of UST is currently $1.10.

This mechanism is responsible for allowing new UST to enter the market while also ensuring that the protocol’s price peg of $1 is maintained.

Compared with current price,
41.95M dollar worth of $Luna has ben burned in just 1 week.

Imagine what’ll happend when all the projects building go live .$bEth about to go live on @anchor_protocol. $Anc ✅

As indicated in the preceding tweet, the circulating supply of LUNA has decreased as a result of the recent issuance of new UST, which has benefited the overall price of LUNA.

It is possible that the addition of Ether as a collateral option, along with the expansion of stablecoin offerings and the launch of new protocols on the network, will all result in additional price increases for LUNA in the near future (formerly known as LUNAcoin).