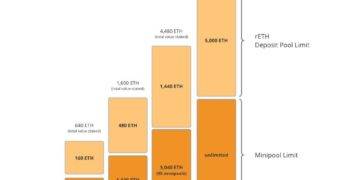 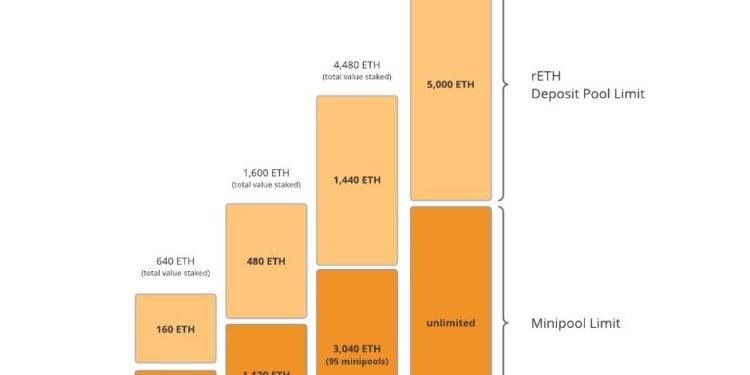 In its first two days of operation, Rocket Pool has registered 237 node operators in 42 different countries, with a total of 1088 ETH invested in the pool.
As of today, the platform has a total value locked in at 4000 ETH ($13.9 million USD), which includes collateral from the network’s Rocket Pool (RPL) token, according to a statement.

Following the publication of the Rocket Pool whitepaper, the company aspires to become the “main staking infrastructure for Ethereum” by delivering a “decentralized, easy to use staking network for people and enterprises.”

Over the course of four weeks, the protocol will be implemented in stages. During the first stage of the launch, which took place on November 9, the protocol restrictions were swiftly reached. Node operator minipool slots reached their maximum capacity in 45 seconds after the stage two launch on November 10, which took place yesterday. The stage two deposit pool maximum of 480 ETH ($2.3 million) was surpassed in record time, according to the blockchain.

Because of a potential vulnerability detected on the network, Rocket Pool was forced to postpone its Oct. 6 launch at first.

Boyko-Romanovsky stated that the two stages of this week’s event went off without a hitch, with the exception of a few minor modifications made Monday night to the website to display’mainnet’ rather than ‘testnet.’

For Eth2 stakers, the launch of Rocket Pool signals the removal of a number of previously insurmountable obstacles. In order to run an Eth2 node, you must generally make a deposit of 32 ETH ($155,000) and ensure that the node is always up and running.

Through the use of the Beacon Chain, Rocket Pool allows individuals, businesses, and decentralized applications (DApps) to receive staking rewards on any quantity of cryptocurrency greater than a minimum of 0.01 Ethereum, without the need to maintain staking infrastructure.

The use of centralized services such as Binance or Coinbase has advantages in that it makes staking a quick and easy alternative for newcomers. However, employing a centralized service provider comes at the cost of relinquishing control of your private keys and receiving lower returns.

Wow! Minipool slots in stage two of the Rocket Pool launch maxed out in less than a minute!
For those who missed out, stage 3 will kick off on 15 Nov 00:00 UTC.
The rETH deposit pool limit has increased so liquid staking is available… for now.

For staking, decentralized staking services such as Rocket Pool (as well as other protocols like as Blox Staking and Stkr) rely on a trustless implementation, which means that they do not store private user validator keys or withdrawal keys.

Rocket Pool, according to Boyko-Romanovsky, is a “great example of a decentralized solution for Ethereum,” as reported by CoinNewsDaily.

“The more services like that, the more use cases Ethereum can have, and the more people who will admire decentralization.”