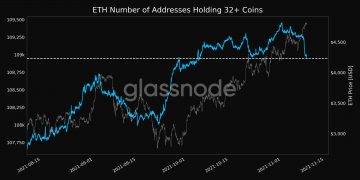 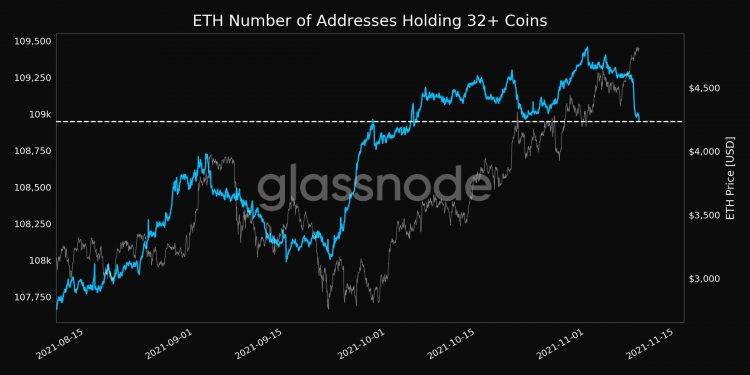 On November 9, the number of Ethereum addresses that held 32 or more Ether (ETH) fell to a one-month low, according to CoinMarketCap.

According to data from Glassnode, the number of externally owned Ethereum accounts (EOAs) holding at least 32 ETH has decreased to 108,949 from 108,965 on Oct. 22, a sign that traders and investors have shied away from the prospect of becoming validators on the company’s upcoming proof-of-stake blockchain, dubbed Ethereum 2.0.

In order to become a full node validator in Ethereum 2.0, users must first deposit 32 ETH into a predefined smart contract address, which is then used to validate other nodes. The depositor acquires the ability to manage data, conduct transactions, and add new blocks to the updated Ethereum blockchain as a result of this operation.

As a result, Ethereum addresses having a balance of 32 or more ETH tokens are categorized as “possible validators” by Glassnode researchers.

With the recent drop in the number of possible Ethereum 2.0 validators, the price of ether has continued to rise steadily in tandem.

Notably, the price of Ethereum has increased by almost 37% in the last 30 days, reaching a new high of around $4,842 on Nov. 8. As a result, it currently costs more than $153,000 to become a full node validator on the Ethereum 2.0 blockchain, compared to a cost of approximately $23,600 at the beginning of this year.

Data from StakingRewards.com, on the other hand, shows that investing 32 ETH for a year presently generates an annual percentage yield of 5.42 percent.

Holding spot ETH positions, on the other hand, has generated about 1,000 percent in paper returns over the previous 12 months, while also allowing for profit-taking in order to protect against any negative risks.

It has also been reported that the number of Ethereum 2.0 validator addresses has decreased as Ether prepares for a push towards $6,000.

The cryptocurrency’s latest ascent to a new all-time high of approximately $4,842 is part of a Cup and Handle breakout, which indicates that the current bullish momentum is expected to extend towards or over $6,000 in the near future, as illustrated in the chart below.

It arises after the price initially rallies to the upside and then corrects to form a rounded bottom, which is referred to as the Cup pattern, before continuing to move higher. It then follows a recovery towards the previous high, which is then followed by a failed breakout attempt above the previous level.

When the price pulls back once again, it grinds out a smaller rounded bottom, which is referred to as the Handle. At the conclusion of the day, the price returns to a previous high for the second time and successfully breaks out to go as far as the depth of the cup allows it.

As of this writing, Ether’s Cup depth is above $2,200, which places its Cup and Handle profit objective at over $6,100. This would result in a $195,200 increase in the cost of becoming an ETH 2.0 validator in the event that this were to occur.