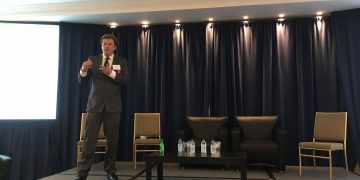 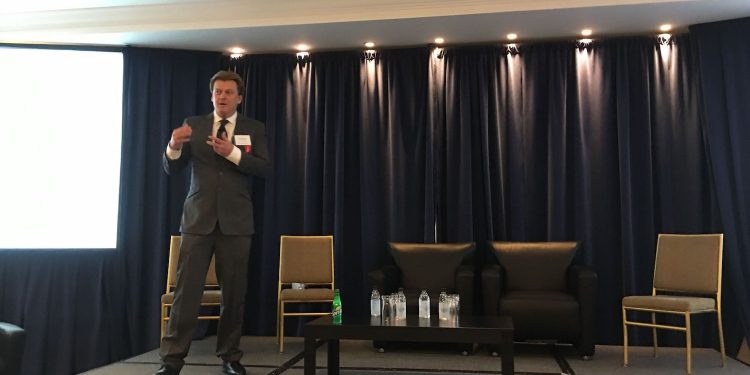 “Warning! This is all risky, it may all fail.”

That was how Patrick Byrne, CEO of Overstock, concluded his keynote about investing in blockchain at a Wednesday event in New York hosted by investment bank and brokerage Oppenheimer & Co.

Unusually formal in a suit and tie, Byrne electrified what had until that point been a fairly low-key crowd with his well-honed stump speech for blockchain’s transformative potential.

Oppenheimer clients filled more nearly 150 seats and were enthusiastically taking pictures of Byrne’s slides illustrating his vision of the most promising applications of blockchain.

He opened his presentation by providing a brief overview of traditional securities trading and its pitfalls – highlighting, as he has been wont to do for years, the fact that due to the arcane structure of today’s market, the ownership of stocks is indirect and somehow dubious.

In one of many lines to draw laughs from the crowd, he said:

Byrne went on to proclaim that blockchain, by improving transparency and minimizing the need for trust, can bring capital markets to the state where “all kinds of systemic risks go away,” as people cannot meddle with the process or act dishonestly.

“Imagine we have a magic ledger which is cryptographically protected, public and transparent – no way to cheat,” he mused, provoking a few more chuckles in the room.

Reiterating his estimation that in the course of the next decade all types of securities can be tokenized, bringing a potential value of new blockchain securities of $914.4 billion, Byrne turned to Overstock’s favorite child: the security token trading platform tZERO, which officially launched this year (though trading there so far has been slow and limited to Wall Street hours.)

The market structure concerns mentioned are what led to the development of tZERO over the past four years, he said, noting that despite these issues, the company was still developed in accordance with U.S. regulations.

Overstock’s team – and that of Medici Ventures, Overstock’s venture arm – has always been cautious and “SEC-conscious” developing tZERO, Byrne emphasized, and the startup even “bought a piece of Wall Street” in the form of fintech company SpeedRoute, which was acquired in 2015.

The process has been slow, though steady.

“In December 2015, we applied to issue a public blockchain security — it took one year and $10 million of legal wranglings [but] we issued it,” he said.

Moreover, he wants to continue to focus on building tZERO out without violating either these regulations or otherwise harming his potential users, Byrne said, concluding:

Patrick Byrne at the Oppenheimer conference, photo by Anna Baydakova for CoinDesk