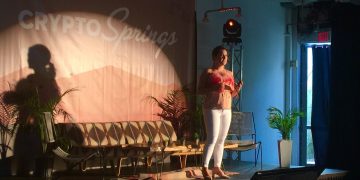 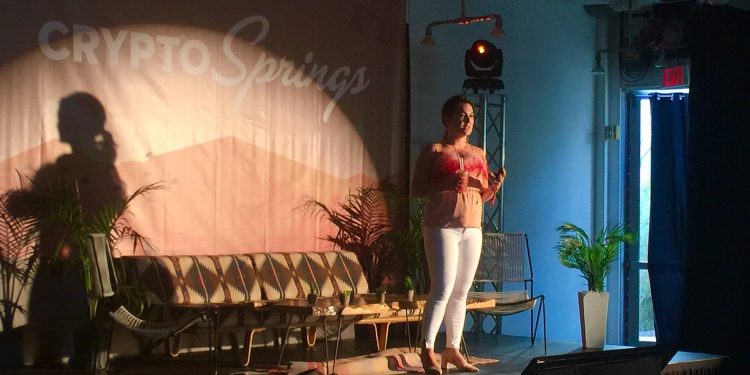 That may seem counterintuitive for a poolside gathering of cryptocurrency industry veterans in Palm Springs, California. But the tone distinguishing this event from the plethora of blockchain conferences was an acute focus on shortcomings and open-ended questions.

“Decentralization is not a myth,” Demirors, founder of Athena Capital and chief strategy officer at the asset manager CoinShares, told the audience. “It just hasn’t been implemented properly yet.”

She was hardly the only one to espouse this view. In his presentation, Dogecoin creator Jackson Palmer even went so far as to lambaste the Bitcoin Core team for the “centralized way” in which they fixed the recently discovered bug in bitcoin’s code, which involved coordinating with bitcoin miners behind closed doors.

Palmer also said there is a “complete lack of transparency” about who manages the Bitcoin Core code base, and that he believes the whole bitcoin ecosystem suffers from a lack of diversity regarding both programming languages and implementations.

“A lot of people in the space are afraid to reflect on bitcoin,” Palmer told CoinDesk, questioning why retail adoption is still a rarity. “If bitcoin was a startup, it would be dead. It hasn’t reached product-market fit.”

Addressing one of these criticisms, Bitcoin Core developer Matt Corallo told CoinDesk that diversifying bitcoin might require a great deal of extra work to maintain consistency across the complex network, at best, and lead to network forks that reduce bitcoin’s usability at worst.

“If you have multiple implementations that people run, then [nodes] have to run both,” Corallo said. “With multiple languages, you’re going to have different behaviors…you don’t want to rewrite too many things because that’s how you end up with lots of bugs.”

One point of broad consensus at the event, though, was that the godfather of cryptocurrencies requires more peer review.

“There needs to be more talent working on [bitcoin] full-time,” Palmer told CoinDesk.

Corallo agreed, adding the shortage of code reviewers isn’t caused by a lack of funding opportunities. In Corallo’s mind, the problem is a lack of skilled engineers willing to devote their time to this space.

Referring to the power to merge changes into the bitcoin code, he said:

And regarding the recent bug, Corallo said Bitcoin Core’s mentality is to place more responsibility on reviewers than solely on the shoulders of the few full-time contributors. When the community lacks an abundance of skilled reviewers, the open source process is inherently hindered.

So Satoshi Labs co-founder Alena Vranova, who recently left the helm of the crypto wallet maker Trezor to found the nonprofit B Foundation, told CoinDesk her next goal is to create online courses and grants to increase the number of engineers contributing to bitcoin.

“More implementations doesn’t necessarily fix the issue of bugs. If you have forks, they can just inherit the bugs,” Vranova said. “You can either create specific bug bounties for different implementations or you can make sure there are plenty of developers who understand the code enough to do peer review.”

Throughout the conference’s first day, people expressed differing opinions on how cryptocurrency could change the world.

Corallo’s presentation on Thursday will focus on decentralization and mining, especially bitcoin’s underlying principle of censorship resistance, which the developer told CoinDesk he is still unsure could scale to a trillion-dollar market.

Crypto Springs co-organizer Elizabeth Stark, CEO of Lightning Labs, a startup that focuses on the scaling solution called the Lightning Network, said corporate incumbents are the biggest threat to the crypto ecosystem.

Financial products like a bitcoin exchange-traded fund are much more achievable in the next year than mainstream retail adoption, he added.

Further, Mallers suggested that the nascent market for futures contracts could help the crypto industry transfer financial risks to professional speculators (much like farmers do with commodity traders), helping smaller players survive. “I think that bitcoin futures are going to help decentralize mining,” he said.

Reflecting on the critical mass bitcoin is on the verge of reaching almost 10 years after the original white paper was first published, Mallers concluded:

“Either bitcoin will work, and become a trillion-dollar asset, or it won’t and it will go to zero. We’re reaching that point where it will be very binary.”

Testing for Ethereum's Upcoming Hard Fork Is Being Delayed