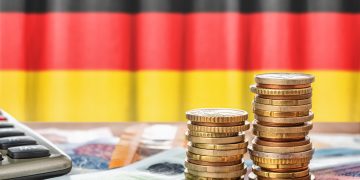 Over the last couple of years, numerous countries worldwide have issued statements concerning their plans for developing central bank-backed digital currencies (CBDCs). CBDCs are basically the direct response of governments to cryptocurrencies as we know them. After all, if the digital currency market is here to stay, countries want to preserve their national fiat currencies for as long as possible, before losing control of the financial market as we know it.

According to recent reports, Germany, which has often been referred to as the financial engine of the European Union, might be considering the idea of working on and launching a digital version of the Euro. This rumor has floated around the web before, yet a recent statement made by the German finance minister and vice-chancellor, Olaf Scholz, proves that the Digital Euro is indeed, a solid idea.

In a recent press statement, given to WiWo, a German business magazine, the finance minister stated that a digital Euro would be great for the financial centre of Europe, and its overall integration into the worldwide financial system. The main argument behind this is that “We should not leave the field to China, Russia, the US or any private providers.” This is definitely understandable, granted that many of the world’s countries are actively researching and working on developing central bank digital currencies.

Launching a digital euro is considerably more difficult, as opposed to, let’s say, launching a digital yuan. The main reason for this is that EU-member countries willingly chose to adopt the euro as their national currency. Therefore, mass-consensus from euro countries needs to be obtained and then edited into the local legislative framework.

What other international actors are doing

China is very likely to release a digital version of the Yuan next year. Recent reports indicate that the development of the CBDC is on-going, although most other details regarding the coin are unknown at this point in time. The same goes for Russia, where despite an unfriendly stance towards cryptocurrencies, research into CBDC development is also being carried out.

So far, there are no reports concerning a digital version of the dollar, released at the federal level by the United States of America. However, if the trend continues, it is highly likely that the US won’t stand idle while other countries are successfully releasing CBDCs.

As highlighted earlier, the German finance minister also mentioned digital currency development by private entities. Most likely, he referred to Facebook and their upcoming Libra coin.

CBDCs sound promising, since they take an existing and well-reputed fiat currency and make it digital. Basically, the system does not change, yet using it becomes easier. From this point of view, there is nothing wrong with state-issued digital currencies.

However, the cryptocurrency market has shown us that there’s potential to do better. If we choose to live in a world driven by money, it is best for people to have complete control over the money in question. This is ensured through the common principles associated with cryptocurrencies in general: security, privacy, decentralization, and transparency. These are all attributes that a state-backed coin cannot support because of how the traditional financial system is built.

Furthermore, cryptocurrencies also offer users the ability to pay for any product/service, anywhere in the world, without needing to exchange the said coin into a locally-accepted currency. Last but not least, digital currencies also feature large value potential, way above the traditional interest rates offered by banks. As such, storing your savings in a digital currency creates wiggle room, thus allowing your investments to rise overnight according to market price changes. This also creates considerable risk granted the volatility of the cryptocurrency market, yet this risk can be easily mitigated by keeping a diversified portfolio or storing your funds via a stablecoin that’s tied to another value.

Based on everything that has been outlined so far, CBDCs are certainly promising, despite their numerous drawbacks when compared to cryptocurrencies. On the other hand, we have never experienced a fully-fledged CBDC in the wild, so it is too early to pass the final judgment. Lastly, regarding the numerous CBDC development efforts, governments worldwide are just following the herd since no country wants to be left out.