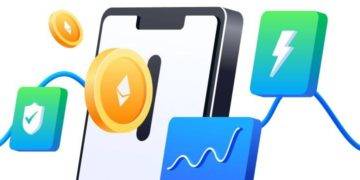 Ether (ETH), the second-largest cryptocurrency by market value, has been taking the spotlight away from Bitcoin recently. The native currency on the Ethereum network is called “ether.” It was created by Vitalik Buterin, a Russian-Canadian programmer, and a few other crypto entrepreneurs in 2013. It’s an open-source platform that lets anyone use it.

Phemex, a big cryptocurrency exchange in Singapore, is a good place to buy Ethereum for people who don’t have a lot of money. The platform even lets users earn interest on ETH deposits, thanks to a team of experts who can offer the best returns in the industry. Phemex is a platform built by people who used to work for Morgan Stanley. Its goal is to make finance more accessible through new blockchain technology.

Cryptocurrency enthusiasts can trade Ethereum like Bitcoin, but it is also a platform for developers to make new apps. This makes it unique. These can be made to make it easier to buy, sell, and use cryptocurrency. This article is going to talk about the future of Ethereum.

What’s in the way of Ethereum right now?

There are a few things Ethereum needs to do to become the most popular thing in the world. These are:

Scalability and slow transaction times are not good things to have at the same time.

There is a problem with the consensus model used by the network, called Proof-of-Work. This means that every transaction on the network has to be checked by every node on the network. In order to verify all of the transactions quickly, more nodes need to be added as more people make them. This is being addressed by Ethereum’s move to Proof-of-Stake, which is controversial in the mining community, but will almost certainly make the network run faster and cost less.

Ethereum’s high and very volatile gas fees have been the subject of a lot of talk in the last few years. Cost: Gas is the amount of money it costs to run a network transaction. Every block that is validated has an upper limit on how much gas can be accepted.

A gas limit has been put in place because every action on the network needs gas, and no one application should be able to use up all of the gas. It turns out that the miners who check if a transaction has been made choose the transactions that pay the most gas fee (reward) first. There are some that aren’t chosen at all.

Gas is like a user’s bid for space on a block. This dynamic leads to high network fees because there is a lot of demand for a limited amount of space. Like network performance, Ethereum’s move to Proof-of-Stake and its change in the reward system for validators should bring gas prices down to a level that is acceptable.

The Ethereum blockchain is only getting bigger and bigger. It shows up in more and more businesses around the world. However, its use of a less popular coding language and older software makes poor use of the network’s processing power, so it doesn’t work well.

This could hurt the value of Ethereum in the future. Businesses that use smart contracts made on the Ethereum platform could be affected by this. Competing platforms like Solana and Avalanche make development much easier and have come up with new ways to solve the blockchain trilemma, which makes them more appealing to people who want to make blockchain-based projects and DApps in the future.

That said, Ethereum is still the best platform for running distributed apps because of its huge network of users. In the long run, projects will always want to start on the most popular blockchain. Ethereum doesn’t look like it’s going to give up the title for a while, though.

An algorithm will randomly choose nodes to record transactions in Ethereum 2.0. This will make it easier for people to keep track of their money. Chances of being chosen go up with the amount of money the owner of the node has or “stakes.” This means that the complexity of cryptographic work can be dramatically reduced, which means that the whole network will be able to do a lot more work at the same time.

Another important part of Ethereum 2.0 is “sharding,” which will make it more efficient at distributing resources. Data verification tasks can be split up into smaller tasks so each node only has to verify the data that was sent to it, not the other data bundles. This means that the whole blockchain can work on tasks at the same time, which will make the network a lot more powerful. Expect Ethereum 2.0 to be a lot faster and more efficient than it is now.

Ethereum 2.0 will also be able to use WebAssembly through the name “eWASM.” This will make it possible to run Ethereum code in a modern web browser. It will also let developers write code for the blockchain in more accessible languages like Rust, C, and C++.

Even though Ethereum 2.0 was supposed to come out in 2019, the first phase didn’t start until December 1, 2020. With two more stages to go, the full release isn’t expected to happen until late in 2023.

Ethereum could reach $19,842 by 2025, Forbes says. ETH has its flaws, but over the last few years, the project has found its place in the market. As long as its current run is any indication, Ethereum has a very bright future ahead of it.