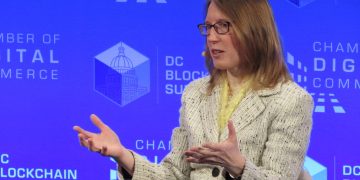 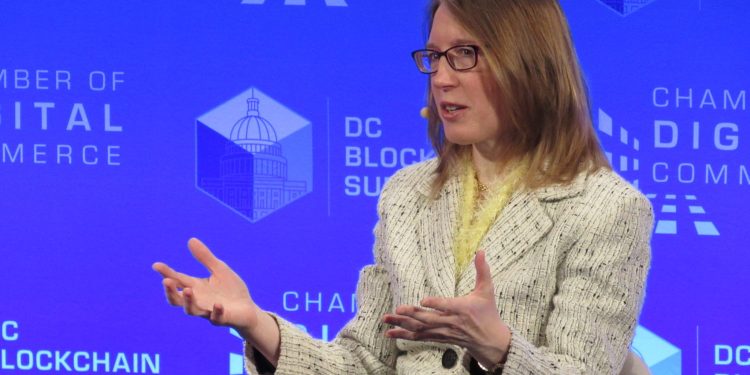 A notably blockchain-friendly member of the U.S. Securities Exchange Commission (SEC) has pushed back on an industry lobbyist’s call for a coordinated national strategy for the technology.

The Digital Chamber of Commerce’s National Action Plan calls on the federal government to “make blockchain technology a priority,” by publicly supporting development in the space, adopting a formal light-touch regulatory approach, creating clear policies and regulations based on what the technology does (rather than the type of technology used) and preventing a “regulatory patchwork” by coordinating state and federal efforts.

“If we want the United States to be a leader in advanced technology we have to take action,” Perianne Boring, who founded the Chamber, said in her opening remarks at the organization’s D.C. Blockchain Summit this week. “It is time the United States introduced a national strategy for blockchain.”

Boring brought the action plan up again the next day, during a fireside chat with SEC Commissioner Hester Peirce, whose dissenting vote to approve a bitcoin ETF earned her the nickname “crypto mom” last year. And Peirce sounded lukewarm at best about the idea.

“What types of action would you like to see the government take?” Boring asked Peirce of the plan. The Commissioner’s response focused on the need for innovation to come from the private sector, rather than having the federal government facilitate large-scale cooperation across the country.

“People think ‘oh wouldn’t it be great if we coordinated this from the government’ and that has gotten us into lots of problems in the past,” Peirce said, adding:

“We need to have clear regulatory guidelines, that’s something I think you’ve been very forthright in calling for, which I think is really important. We do need to let people know where they stand, but then within that we need to let people do what they want to do and try not to have too much government partnership with the private sector.”

The government should just set up those guidelines and “let the innovation happen on its own,” she added.

‘Come in and tell us’

That said, Peirce encouraged the technologists and entrepreneurs in the room to pipe up.

What innovators can do is reach out to the SEC and other government agencies and let them know where specifically they need clarity, Peirce said, adding that, “you all need to come in and tell us where the pain points are, where the old regime doesn’t fit, and then we can move forward with guidance.”

In her comments, the Commissioner explained that she would like to see Commission-level guidance issued which clearly outlines where the legal lines are and how blockchain projects might interact with those lines, “but we need from you examples of where that would be helpful.”

Part of the hangup between developers in the blockchain space and the SEC may be the speeds at which each group typically works. Relative to the SEC’s perspective, the agency is “moving quickly,” but from a blockchain project’s point of view, the regulator may be moving very slowly, Peirce said.

She highlighted the SEC’s FinHub division, which is focused on interacting with blockchain and other fintech startups. On the branch’s website is a submission form, which Peirce hopes technologists will use. To date, only a handful of projects have actually provided feedback:

“We’ve gotten … maybe five or six letters and I was pretty disappointed by that. It does take work on your part but we really need people to be writing in.”