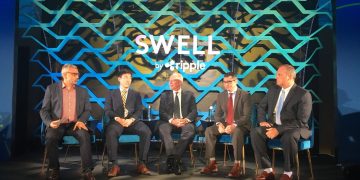 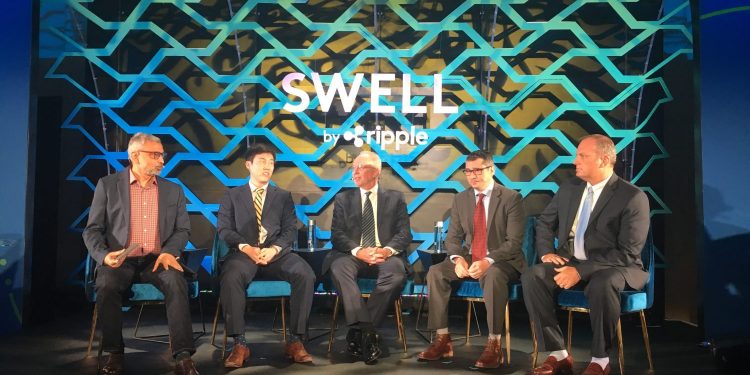 The organizers of Ripple’s two-day Swell conference in San Francisco didn’t beat around the bush when they named the final panel of the event “The 800-Pound Gorilla.”

The question of crypto asset adoption was certainly on many of the attendees’ minds, especially since Ripple CEO Brad Garlinghouse announced the previous day that xRapid, the company’s product the leverages the XRP cryptocurrency for “on-demand liquidity” in cross-border payments, is now being used in commercial payments by three companies.

At the time of the event, the combined value of all XRP in circulation was worth roughly $21 billion, with each asset trading for around $0.50. XRP previously traded at above $3.50 earlier in the year (at a $130 billion market capitalization) and at around $0.20 at the time of its inaugural Swell conference last year. Widely circulated estimates suggest Ripple owns as much as 60 percent of the overall market for the asset, though many remain under trading restrictions.

Representatives of two of the companies in question were on the panel: Brad Ganey, COO of Catalyst Corporate Federal Credit Union, and Nicolas Palacios, CFO of Cuallix. (The third company using xRapid commercially is MercuryFX.)

They were joined by Kwon Park, head of business development at Bittrex, a cryptocurrency exchange that has partnered with Ripple to facilitate the fiat-to-XRP transactions at the center of xRapid; and Alfredo O’Hagan, SVP of payment services at IDT, a telecoms firm that provides international payment services and has trialed xRapid in the past.

As might be expected from a group that uses cryptocurrencies in their businesses, the panelists were mostly enthusiastic about the adoption of digital, cryptographic assets in cross-border payments.

“There’s a big difference” between xRapid and traditional systems such as SWIFT, said Palacios, in terms of “cost efficiency, time efficiency, transparency” and customer experience.

“We see a lot of competitive advantage to this moving forward,” Ganey said of xRapid, given that sending international wires is costly, time-consuming and “not the cleanest process.” Rather than thinking of the service as a totally new or alien technology, he added, it may be better to describe it as “a digital wire. It’s a faster wire.”

Garlinghouse perhaps captured the unsatisfactory nature of the incumbent payment infrastructure on the first day of the conference, when he said that the fastest way to move money from Kuwait to San Francisco was to put cash in a suitcase and fly it there.

Replacing this system with crypto solutions isn’t without its hurdles, however, as O’Hagan pointed out:

“We are regulated entities so we have to make sure all the pieces are in place.”

The process of “education” – an oft-repeated word on the panel – doesn’t only involve regulators, however, but internal risk management and compliance personnel, as well as banking partners.

“The corporate risk committee had to be convinced,” said O’Hagan, continuing, “The first time we mentioned, cryptocurrency we got this” (he imitated a loud, exasperated sigh). IDT, he said, has seen up to a quarter of its international payment flows completed in cryptocurrencies, including bitcoin, litecoin and “whatever is best in that particular market” in terms of the exchange rate.

Ganey, however, said that as far as regulators are concerned, “to this point we’ve met with no resistance.”

An earlier panel provided some cause for optimism on the regulatory front. Michael Didiuk, partner at the Seattle-based law firm Perkins Coie, said that he did not believe the U.S. Securities and Exchange Commission (SEC) – where he spent eight years – would consider XRP a security.

“I think it’s a currency,” he said, though he added that a surprise decision to the contrary (for any cryptocurrency that the market is currently treating like a currency) “is going to have ripple effects – no pun intended.”

Regulatory uncertainty and internal pushback are not the only barriers to mass cryptocurrency adoption in international payments, however. O’Hagan said: “If you look at xRapid as a hub, you need the spokes, you need the entities that will enable that last mile […] The more companies that join in, the better we all are.”

In other words, part of what’s holding back adoption is lack of adoption.

Ganey, however, did not appear to be worried about that, quipping in reference to other financial institutions:

“I would be perfectly in favor of them staying on the sideline for a while.”

Image by David Floyd for CoinDesk

Bitcoin’s Proof-of-Work Can Be Made More Efficient, IBM Research Claims