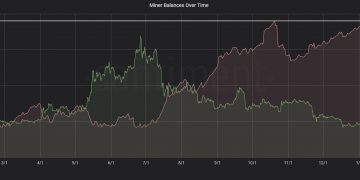 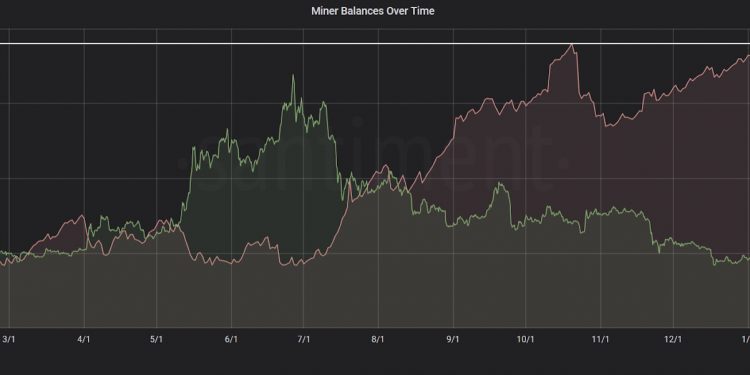 Ethereum miners are hoarding ether tokens, and this could indicate high confidence in the project.

The number of ether tokens held by all ETH mining pools is back near its  all-time-high of 1.69 million ETH set in October, according to crypto market data platform Santiment.

The rise from November’s low of 1.64 million has happened in a stable and undisrupted manner.

The cumulative balance of all ETH mining pools has risen by 11 percent from 1.52 million a year ago.

Notably, miner balances rose sharply from 1.54 million to 1.69 million in four months to October even as prices halved from $366 to $170.

One possible reason miners are willing to accumulate coin balances amid lower prices is market sentiment had turned bullish following the cryptocurrency’s 120 percent rally in the first six months. Price dips have been largely viewed as bull market corrections by the analyst community.

The cryptocurrency, however, continued to lose altitude and fell below $170 in late October, prompting some of the miners to liquidate their holdings, as noted by Balashevich.

As a result, cumulative balances fell back to 1.64 million by early November.

Mining profitability is heavily influenced by price gyrations. A sustained price slide hurts revenue, forcing small and inefficient miners to scale back operations. While moving off blockchain, these miners often sell their coins to make up for mining related losses, adding to bearish pressures around prices.

Ether’s price has rallied by 36 percent in January, and the broader trend seems to have flipped bullish. Thus, miner balances could soon rise to new record highs above 1.69 million.

“Barring major market volatility this time around, we’re likely to breach this milestone within the next few days,” Balashevich wrote.