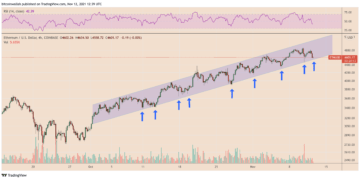 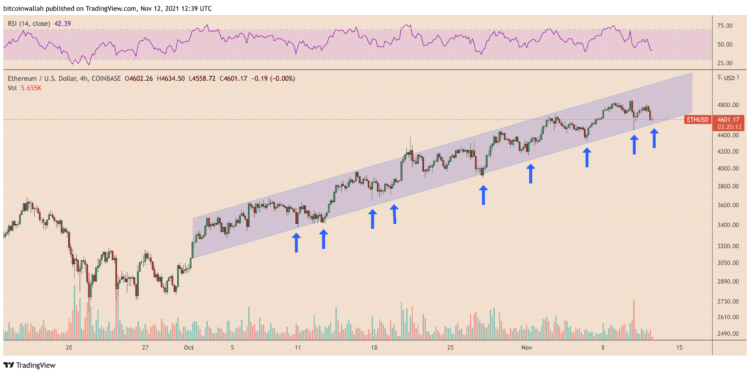 The price of Ethereum’s native token, Ether (ETH), is falling into a trading zone that has a previous history of drawing buyers, and this could result in yet another large rebound in the days ahead.

In addition to being a member of an overall ascending channel range, the rising trendline has been responsible for ETH’s price recovery since the beginning of the month of October.

Consequently, despite pullbacks at the channel’s upper trendline, Ether’s path of least resistance has always been to the upside, with its quarterly gains currently sitting at more than 38 percent.

Recent sell-offs in Ether, which followed the cryptocurrency’s surge to a new record high above $4,870, were curtailed by the rising trendline, which has been in place since January. According to analysts, a major price rebound is expected in the near future, with a “swing long” scenario provided by Forexn1 on TradingView predicting an increase in price to $5,000.

Following the last price retreat, MacroCRG, a Twitter-based independent market analyst, stated that Ether “needs to bounce” if it manages to hold on to the rising trendline as support in the short term.

Meanwhile, another analyst, Pentoshi, predicted a rebound but cautioned about the possibility of dips below the rising trendline of the stock market.
He stated the following in a tweet on November 12:

“I would love a 20-30% wipeout on alts. Usual bull run dip. Just bc I want it doesn’t mean it will happen. Greed to fear, please.”

Based on the chart below, Pentoshi’s downside objective in the event of a prolonged market fall was near $4,000 per coin.

Beyond technical factors, it appears that Ether’s capacity to minimize price corrections and, on top of that, to make new highs is a result of a combination of elements.

In his research report, Chris Weston, head of research at Pepperstone Financial Pty, identified fears of high inflation as the common denominator that has increased demand for potential hedging assets across the crypto market, resulting in price increases of 500 percent or more for Ether and 130 percent or more for Bitcoin in 2021.

To investors, “Crypto is where the fast money is,” according to Weston, who wrote in a note.

Aside from that, Mike McGlone, senior commodity strategist at Bloomberg Index, predicted a $5,000 price for Ether last week, stating that investment “portfolios consisting of some mixture of gold and bonds appear increasingly naked without some Bitcoin and Ethereum added to the mix.”

Three #Crypto Musketeers Driving $3 Trillion Market Cap – Representing a better way to transact, a strengthening ecosystem and here-to-stay asset class, #cryptodollars are the most significant advancing part of the digital-money revolution and the third leg of the crypto stool. pic.twitter.com/qhEOXttPW8

The analyst mentioned reducing supply as a big bullish stumbling block for the cryptocurrency.

In particular, Ethereum’s software upgrade in August, nicknamed the London hard fork, included a code change that began burning a portion of the gas fees given to miners in exchange for ETH, thereby limiting the supply of the digital currency.

According to data released by Ultrasound.money, the upgrade has resulted in the withdrawal of more than 860,500 ETH, which is currently valued more than $3.2 billion, since it was put into effect. At the present pace of consumption, the Ethereum network expects to burn 5.3 million ETH every year, compared to the 5.4 million ETH that have been distributed.

As McGlone pointed out, a lowering supply rate would put Ether on a bullish path in the face of increasing demand:

“Simply staying the course is the more likely outcome, as we see it. Ethereum has joined Bitcoin with a supply trajectory that is in decline by code. The first-born crypto is the store-of-value, and the No. 2 is the DeFi building block.”