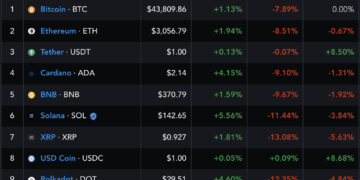 by coinnewsdaily
in Ethereum, NFT, Trading
0 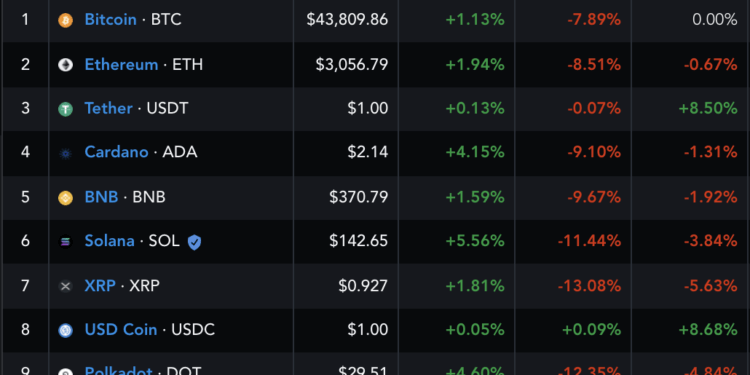 On Sept. 20, Ethereum’s native asset Ether (ETH) prices fell amid a broad selloff in the cryptocurrency market, fueled by concerns about a potential housing bubble crisis brewing in China.

On the Coinbase exchange, the ETH/USD exchange rate fell as much as 12.52 percent to $2,911, reaching its lowest level since the beginning of August 2021. Bitcoin (BTC), Binance Coin (BNB), Cardano (ADA), Solana (SOL), and other top tokens all fell in tandem in the crypto market.

While the decrease mirrored the tone in the larger market, it came after a day of losses in both the Asia-Pacific and European stock markets. The dollar and government bonds in the United States, on the other hand, rose as a result of the haven-buying.

The Chinese property developer Evergrande was at the center of Monday’s sell-off, which was triggered by a liquidity problem. In addition to its commitments to creditors of more than $300 billion, the world’s most indebted property developer also has obligations to its shareholders. The company also faces a significant interest payment deadline on its offshore bonds, which is set to arrive on September 23.

A report by the Financial Times stated that if the Evergrande collapses, it will likely bring several other banks down with it, similar to what happened when Lehman Brothers went bankrupt during the United States’ housing bubble crisis in 2008.

However, despite the fact that Ether does not trade in lockstep with global markets, its 30-day correlation with Bitcoin, the top digital asset that is exposed to macroeconomic factors, is approximately 0.85. A direct consequence of China’s approaching housing crisis appears to have been felt by the cryptocurrency as a result of this development.

Additionally, the last bout of selling in the Ethereum market resulted in the emergence of a typical bearish pattern, which has a 75 percent success rate in terms of meeting its downside targets.

It is known as the “Double Top” pattern because it arises when a price rally occurs that is followed by a pullback, a rise towards the previous peak, and then another correction — all while remaining atop the so-called neckline support.
Price eventually falls below its neckline and targets levels that are as deep as the distance between Double Top’s peak and the neckline, as shown in the chart below.

Ether appears to be halfway through painting a Double Top pattern when the camera zooms closer. The cryptocurrency’s chart below shows that it reached a high of around $4,385 on May 12, sank to a low of $1,984 near the neckline support, and then soared again to a new sessional high of $4,030 on September 3.

Assuming the Double Top pattern is successful, the ETH/USD rates could continue their current decline toward $1,984 in preparation for a possible collapse move later. However, it does not appear like ETH/USD will be able to drop far below the $1,984-neckline in the near future.

The level is also close to Ether’s 50-week exponential moving average (EMA) (the velvet wave), which is currently at $2,118, providing another layer of support to keep Ether’s bullish bias intact for the time being. Earlier, the wave served as an entry point for bulls as the ETH/USD pair experienced steeper pullbacks.

Meanwhile, on a daily timeframe, the next support line for Ether is at its 200-day exponential moving average (the orange wave), which is $2,536. As a result, a sharp pullback from the mentioned level may be necessary to invalidate the Double Top setup.

Ether’s acceptance continues to be weighed against Ethereum’s role in supporting the burgeoning decentralized finance (DeFi) and nonfungible token (NFT) industries, according to recent reports. Investors should dedicate at least 40 percent of their cryptocurrency portfolios to Ether, according to Cathie Wood, CEO of Ark Invest, who spoke at the recent SALT conference.

Projecting a 10x growth rate over the next five years, the firm’s crypto exposure is likely to be split: 60% BTC and 40% ETH. https://t.co/VQCZhVCD3m

“I’m fascinated with what’s going on in DeFi, which is collapsing the cost of the infrastructure for financial services in a way that I know that the traditional financial industry does not appreciate right now.”

The author’s views and opinions are solely his or her own and do not necessarily reflect those of CoinNewsDaily.
Every investment and trading move involves risk; therefore, before making a decision, you should conduct your own research.