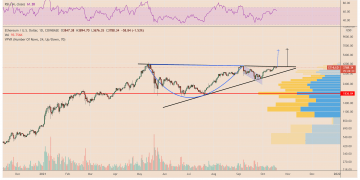 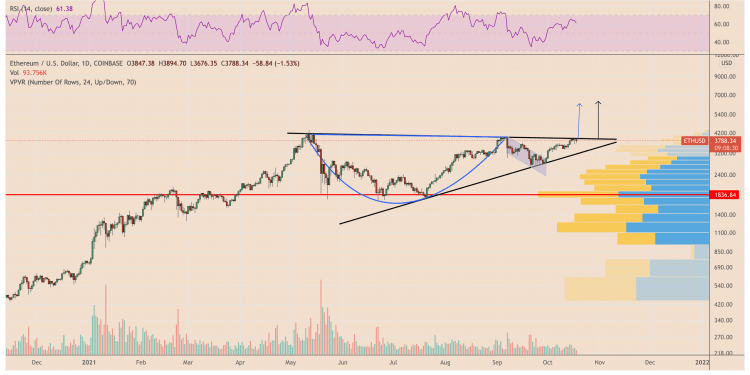 Since the beginning of the year, Ethereum’s native token, Ether (ETH), has gained more than 415 percent in value, reaching more than $3,800. Two major bullish patterns developing on the cryptocurrency’s charts indicate the possibility of further gains, eventually reaching the $6,200–$6,500 price range.

An ascending triangle and a cup and handle pattern have been in place for five months, and the first decisive break above the psychological $4,000 barrier, which serves as a resistance trendline, might signal the start of a textbook price rebound in the coming days.

Further, the Ascending Triangle pattern has a profit objective of $6,250, which is computed by measuring the greatest distance between its horizontal and ascending trendlines and adding the output to the possible breakout level of $4,000.

As a result, the price increase reflects increases that are nearly 64 percent greater than the previous increase.

The Cup and Handle pattern, which has a slightly lower success rate than the Ascending Triangle pattern, is showing a potential run-up into $6,550 in the coming sessions, which would represent a 56 percent increase from the current level of $4,950.

Its profit target is determined by measuring the distance between the Cup’s right peak and its bottom and multiplying the result by the probable breakout level of $4,000, which is the same as the Ascending Triangle’s profit target.

One of the key catalysts that has been supporting the two bullish indications is a decrease in trading volume, which has occurred during the creation of the aforementioned formations.
This shows that traders are not in a good mood about consolidating their positions. Meanwhile, the relative strength index (RSI) remains below the overbought barrier of 70, indicating that there is still opportunity for a bullish move higher.

The bullish view for ETH comes in the wake of a market-wide upswing, which has been fueled by Bitcoin’s (BTC) 29 percent month-to-date price rise, according to CoinMarketCap.

CoinMarketCap reports that Bitcoin and Ethereum have a 30-day correlation coefficient of close to 0.89%. This indicates an 89 percent chance of the two assets moving in sync over the course of 30 days.

Crypto-focused newsletter service Ecoinometrics noted the positive correlation when highlighting the Ether price’s reaction to Bitcoin “halvings,” which is a pre-programmed event that reduces the Bitcoin issuance rate by half every four years in order to maintain the cryptocurrency’s 21 million supply limit.

The portal looked at Bitcoin and Ether’s price reactions to the previous two halvings and used the data to anticipate their tops following the third halving, which took place on May 11, 2020, which was the first time the two currencies had met. As a result, it predicted that Bitcoin will climb 29.5 times in value, reaching $253,800 by the end of November 2021.

Similarly, Ecoinometrics highlighted $22,300 as Ether’s price target in the same period, based on its 120x price rally following the second Bitcoin halving.

More bullish signs for Ethereum came in the form of the continued supply crunch that the cryptocurrency is experiencing.

Notably, on October 1, the total amount of Ether placed into the Ethereum 2.0 smart contract reached an all-time high of about 7.98 million ETH, which was a record high at the time.
These tokens are locked and non-transferable for a period of one year or longer.

Furthermore, the crypto data tracker Santiment recorded a surge in the number of new Ether addresses last week, while the number of non-zero Ether wallets reached a record high of 64.5 million, setting a new high for the cryptocurrency.