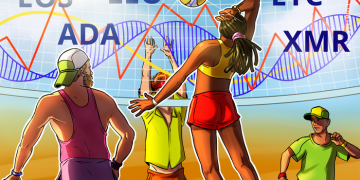 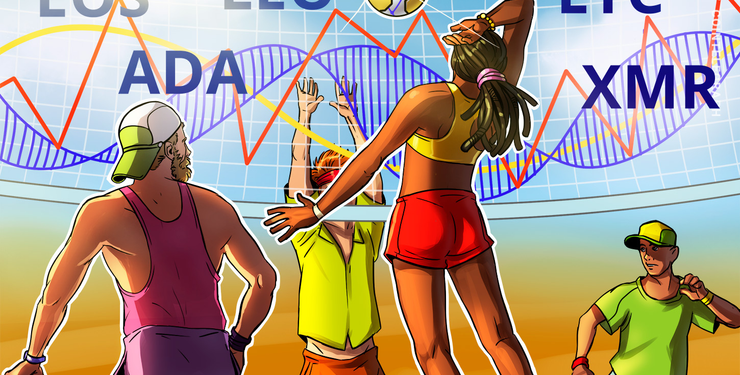 There is a sea of red as most of the top 20 currencies are showing negative returns for the week. This shows that the market is in a bear grip. The total market capitalization has dipped from over $385 billion on June 27 to just over $262 billion at press time. Though Bitcoin prices have also corrected in the past few days, the leading digital currency has managed to hold market dominance above 64%. This shows that market participants prefer Bitcoin over altcoins.

Galaxy Digital CEO Mike Novogratz believes that Bitcoin is likely to consolidate between $10,000 and $14,000. However, once institutional interest picks up, Bitcoin will move up to its all-time-highs before the end of this year. Let’s see if we spot any buy setups in the top five performers of the past seven days.

Due to the uncertain regulatory environment, California-based crypto wallet service Abra has restricted American users from holding five cryptocurrencies, including EOS, after August 29. EOSFinex, the EOS-based decentralized cryptocurrency exchange by Bitfinex, has completed its beta phase and is expected to launch on July 30.

The EOS/USD pair broke below $3.8723 in the week before but it quickly climbed back to close above the critical support. This shows buying at lower levels but demand dries up at higher levels, hence, the price has failed to bounce sharply from the support.

Currently, bulls are attempting to hold the support. If successful, the digital currency might try to rise back above the moving averages and rally towards the recent highs of $8.6503. Both moving averages have flattened out, which points to a consolidation in the next few weeks.

However, contrary to our expectations, if the price plunges below $3.8723, it might descend to the next support at $1.55. If this support breaks, a new downtrend will start, which will be very negative. We suggest traders wait for the price to breakout and close (UTC time frame) above 20-week EMA before buying with a stop loss of $3.20.

Arrington XRP Capital and the Arca crypto investment fund have acquired a stake in Unus Sed Lle (LEO), the native token of Bitfinex, through offshore investment vehicles. This may lead to more trouble for Bitfinex, which is already under investigation for offering trading services to the residents of New York without a license. The company, however, denies doing so. Even with news not being very favorable, the price has turned out to be a winner in the past seven days. Can it build on its strength? Let’s analyze the chart.

As the LEO/USD pair has a short trading history, we will use the daily chart to analyze it. The pair is consolidating between $1.20-$1.40. As the price is trading below both moving averages and the RSI is close to the oversold zone, the advantage is with the bears. If the digital currency breaks below $1.20, it may correct to the low at $1.0075. A breakdown to new lows will be a bearish sign.

Conversely, if the price attempts a recovery, it will face resistance at 20-day EMA and above it at $1.40. A breakout of $1.40 will be the first indication that a short-term bottom might be in place. On the upside, the first target is the 50-day SMA, above which, a rally to $2 is probable. We suggest traders wait for the price to break out and sustain above $1.40 before attempting to buy it.

Though Ethereum Classic (ETC) has declined over 4% in the past seven days, it has turned out to be the third-best performer among major cryptocurrencies. Can the price recover or will it fall further from current levels? Let’s find out.

The ETC/USD pair is attempting to form a large base at the bottom. It has been trading inside a large range of $3.40-$10 since end-October last year. This is a positive sign because the longer the base, the stronger the eventual breakout from it will be. The price turned down from the overhead resistance of $10 after bulls failed to scale it for five weeks (enclosed in an ellipse on the chart).

Currently, the price has dipped below both moving averages, which have flattened out. This shows that the price is likely to remain inside the range for the next few weeks. If it gradually drops down close to the support at $3.40 and bounces off it, we will suggest long positions as it will offer a low-risk buying opportunity.

Our neutral view will be invalidated if the bears sink the pair below $3.40. In such a case, the cryptocurrency will start a new downtrend.

Cardano (ADA) was the fourth-best performer of the past seven days even though it fell by over 4%. During the week, it rallied to become the tenth-largest cryptocurrency by market capitalization. Will it maintain its position or will it again fall out of the top ten? Let’s find out.

The bears broke below the support of $0.0592761 in the week before but they could not sustain the lower levels. This shows buyers are keen to lap up the cryptocurrency on dips. However, bulls have not been able to push the price higher in the past seven days. This shows that buying dries up at higher levels. The ADA/USD pair has formed an inside day candlestick pattern, which shows confusion among buyers and sellers regarding the next direction.

If the price plunges below $0.050, it may correct to $0.035 and if it cracks that barrier, a retest of the yearly lows is likely. On the other hand, if the price climbs above both moving averages, it is likely to reach the overhead resistance of $0.10. We believe traders should wait for the price to scale above 20-week EMA before establishing fresh positions.

Monero (XMR) is attempting to make a place in the top 10 cryptocurrencies by market capitalization. Do the technicals on the chart show any bullish setup? Let’s find out.

The bulls are attempting to hold the XMR/USD pair above the support at $81. Though bulls purchased the dip to $71.842 in the week before, they have not been able to force a rebound. This shows a lack of demand at higher levels.

Currently, the price is hovering around $81. If it fails to bounce from this level, the probability of a breakdown increases. The next support on the downside is at $60.

Both moving averages have flattened out and the RSI is close to 50, which points to a consolidation for the next few weeks. If the pair reverses direction from current levels and moves above $90.114, it will try to climb up to $120. However, we do not find any buy setups, hence, we remain neutral on it.