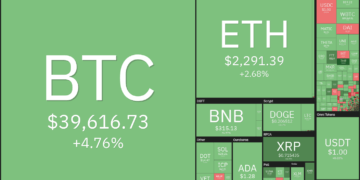 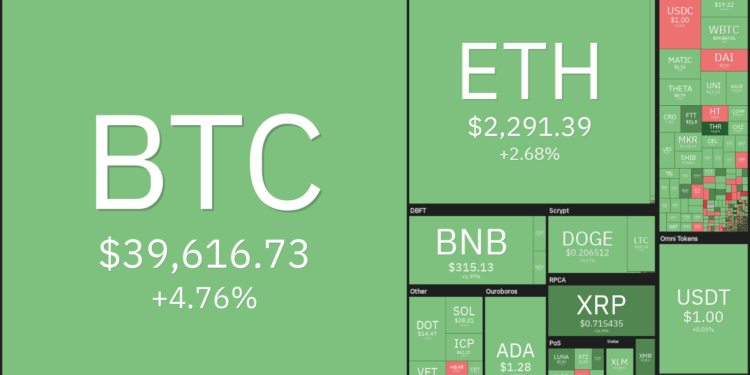 Bitcoin (BTC) and the majority of major altcoins are attempting to break above their respective overhead resistance levels, signaling the reemergence of the bullish trend in cryptocurrency.

According to Bybt data, the Grayscale premium has been steadily increasing and reached a low of -5.88 percent on July 27, the lowest level since May 25, when it was -5.88 percent. This suggests that institutional investors have re-entered the Bitcoin market through the Grayscale Bitcoin Trust, possibly for the second time.

On July 27, the assets under management of Canada’s Purpose Bitcoin ETF reached 1.1 billion Canadian dollars, the highest level since May 13. This is another institutional investment product that may see a resurgence in buyer interest.

During its half-year financial report, the Swiss private bank Vontobel stated that its Bitcoin tracker certificate investment product had sparked a significant amount of interest among its clients. According to Bloomberg, Vontobel CEO Zeno Staub stated that some of the company’s wealthy clients have allocated a portion of their wealth to cryptocurrencies.

Co-founder Peter Doyle of Horizon Kinetics, who spoke to the Financial Times, also stated that the world economy is at an inflection point as a result of the pandemic and rising debt levels. This “means either a default or a devaluation of the currency.” As a result, Doyle believes that people should have some exposure to cryptocurrencies.

The return of institutional interest in Bitcoin raises the question of whether the rally will continue or whether bears will again stymie the recovery near overhead resistance levels. In order to find out, let us look at the charts of the top-10 cryptocurrencies.

The long wick on the July 26 candlestick indicates that bears were aggressive in their selling near the $40,550 level, but the positive sign is that bulls flipped the $36,670 level into support on July 27, indicating that bulls are gaining momentum. This indicates that investors’ sentiment may be shifting from selling on rallies to buying on dips.

Today, the bulls pushed the price above $40,550, but the wick on today’s candlestick indicates that the bears have not yet surrendered. They will attempt to stall the recovery once more in the $41,330 to $42,451.67 overhead resistance zone.

If the price falls below the current level or the overhead zone, the BTC/USDT pair may fall to $36,670 once more. A strong bounce off of this level indicates that bulls are not waiting for a deeper correction to enter.

The pair could then consolidate within the range of $36,670 to $42,451.67 for the next few days, increasing the likelihood of a break above the range. Moving averages have completed a bullish crossover, and the relative strength index (RSI) has entered the overbought zone, indicating that bulls have re-entered the game.

This bullish view will be rendered invalid if the price falls below the moving averages. This brings the substantial range of $42,451.67 to $28,805 into play.

On July 26, Ether (ETH) reversed from the downtrend line, but the bears were unable to sink the price below the moving averages.
This indicates that bulls are purchasing on minor pullbacks.

The moving averages are on the verge of completing a bullish crossover, and the RSI has entered the positive territory, indicating that bulls are in control. If bulls successfully push the price above the downtrend line, momentum may increase. This could pave the way for a rally to $3,000 or higher.

Alternatively, if the price reverses from either the current level or the overhead resistance and falls below the moving averages, the ETH/USDT pair may gradually fall to the critical support level of $1,728.74.

The long wick on the candlestick from July 26 suggests that bears sold at higher levels. They attempted to contain the aggressive bulls by repositioning Binance Coin (BNB) below the downtrend line, but the buyers refused to relent.

On July 27, the bulls successfully defended the 20-day exponential moving average ($304) and are attempting to push the price above the 50-day simple moving average ($312) today. If they are successful, the BNB/USDT pair may rise to the $340 overhead resistance level.

A break and close above $340 would pave the way for a rally to $400 and then to $433. This bullish view will be invalidated if the price breaks below the 20-day EMA and breaks below the current level or the overhead resistance. This could result in a drop to $254.52.

On the candlestick of Cardano (ADA) on July 26th, traders are going to be sold at rallies. On July 27, the bears attempted to pull the prices below the EMA for the last 20 days ($1.25).

This could have re-energised the buyers, who are now attempting to push the price above the 50-day simple moving average ($1.33).
It’s possible that the ADA/USDT pair will gradually rise to $1.50 as a result of this. It is possible that buyers will face a significant challenge at this level; however, if they can overcome it, the pair may begin its upward journey toward $1.94.

Price turning down from the current level or the overhead resistance and falling below $1.20 will indicate that bears are continuing to sell at every higher level, on the other hand.
It is possible that the critical support level of $1 will be tested again.

The bulls’ sustained buying today has lifted the XRP/USDT pair above the 50-day simple moving average (SMA) for the first time since May 19.
If buyers are able to get past the $0.75 hurdle, the pair will complete a double bottom pattern at that point.
This setup has a $1 target objective as its primary goal.

The 20-day exponential moving average is attempting to turn up, and the relative strength index (RSI) has risen above 62, indicating that the path of least resistance is up.

In contrast to this assumption, if the price declines from $0.75, the bears will attempt to drive the price below the 20-day moving average once more.
If they are successful, the pair may be able to maintain its consolidation between $0.50 and $0.75 for a few more days.

With a long wick on its July 26 candlestick, bears appear to be aggressively defending the 50-day simple moving average ($0.23) of Dogecoin (DOGE).
On July 27, the sellers attempted to keep the price below the 20-day moving average ($0.20), but were unsuccessful.

As a result, buyers haven’t given up hope and will make yet another attempt to push the price above the 50-day simple moving average.
If they are successful in doing so, the DOGE/USDT pair may begin a relief rally that could reach $0.28 and then $0.33 in value.

On the other hand, if the price continues to fall below the 50-day simple moving average, several short-term traders may decide to close their positions.
This could result in a break below the 20-day exponential moving average, which could pave the way for a decline to $0.15.

On July 27, the bears attempted to drive Polkadot (DOT) below the $13 support level, but were unsuccessful, indicating that bulls are accumulating at lower prices.

The buyers will now attempt to push the price up toward the overhead resistance level of $16.93 in the near future.
This level may act as strong resistance again, but the flat 20-day exponential moving average ($13.95) and the RSI near the midpoint suggest that sellers may be losing their grip.

It is more likely that bulls will prevent the price from falling below the 20-day exponential moving average (EMA) during the next correction, which will increase the chances of a break above $16,93.
That could herald the beginning of a sustained relief rally to $20, and then to $26.50 and higher.

This bullish outlook will be rendered invalid if the price continues to fall from its current level and breaks below $13.
This could result in a retest of $10.37 being required.

On July 26, Uniswap (UNI) reversed from the downtrend line, indicating that bears are defending this resistance aggressively.
Although the price fell below the 20-day exponential moving average ($18.25) on July 27, bulls bought the dip.

A new attempt to push the price above the downtrend line will be made by buyers.
If they are successful, the bearish descending triangle pattern that is developing will be rendered invalid.
Failure of a bearish setup is a bullish signal because aggressive bears are compelled to cover their short positions as a result of the failure.There is a chance that the stock will rise as high as $24 and then rally to the critical overhead resistance level of $30.
The price could fall below $17.24 and the UNI/USDT pair could begin its downward journey toward $13, which is the polar opposite of this assumption.

On July 26, Bitcoin Cash (BCH) fell below the 50-day simple moving average ($504), but the bulls held on to the 20-day exponential moving average ($471) on July 27. This points to a tense battle between the bulls and the bears in the future.

The 20-day exponential moving average (EMA) has flattened out, and the relative strength index (RSI) has risen into the positive territory, indicating that bulls are attempting to mount a comeback.
With a breakout and close above $546.83, the BCH/USDT pair will complete a double bottom pattern, signaling the beginning of a sustained relief rally.

This rally may encounter stiff resistance at $650.35, but if it is able to overcome it, it has the potential to reach the pattern target of $710.13.
Alternatively, if the price declines from its current level and breaks below the 20-day exponential moving average, the pair could remain range-bound for a few more days, as opposed to the previous assumption.

The bears are expected to put up a strong fight in the overhead zone between the 50-day simple moving average and $146.54.
If the price begins to decline from this zone and falls below the 20-day exponential moving average, it will indicate that the range-bound action may continue for a few more days.

A double bottom pattern in the LTC/USDT pair will be completed, however, if bulls are successful in driving the price above $146.54.
This bullish setup has a target price of $189.25 as its primary objective.
The fact that the RSI is above 57 and the 20-day EMA is flat indicates that buyers have a slight advantage.