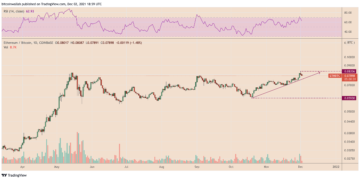 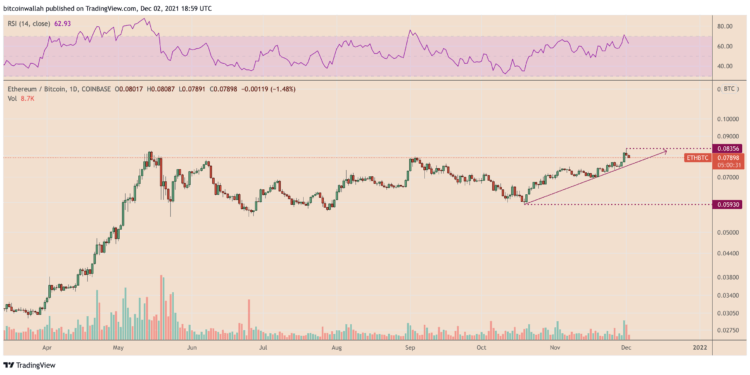 This week, the price of Ether (ETH) against Bitcoin (BTC) reached a new 2021 high, increasing its year-to-date returns to slightly more than 350 percent. According to technical analysis, the surge may be able to go considerably further in the next weeks.

On December 1, bids for the ETH/BTC pair reached 0.0835 BTC on Coinbase, marking the first time this year that this has happened. The price increase was part of an uptrend that began in mid-October after Ether bottomed out versus Bitcoin at 0.0630 BTC, resulting in a nearly 41 percent price retracement of the previous month’s decline.

The rise in the price of Ethereum relative to Bitcoin reflects widespread interest in the cryptocurrency, which is currently the world’s largest smart contract platform in terms of both users and market value. This is in contrast to the situation that exists for Bitcoin, which is often used as a speculative hedge against inflation in a variety of different global economic environments.

Recently, Ethereum has emerged as a critical asset in emerging crypto-growth industries like as nonfungible tokens (NFT), decentralized finance (DeFi), and the Metaverse, among others. The organizations operating in this field require Ether in order to execute their smart contracts, which has raised demand for the altcoin and contributed to a continuous upward trend in the price of the cryptocurrency over time.

The demand for eth is projected to stay strong in the coming year, and this basic fact has many analysts predicting values in the $6,000 to $10,000 region for the cryptocurrency.

Matt Maley, the chief market strategist at Miller Tabak & Co., said that if Ether price were to break over its mid-November high of roughly $4,900, it would see further rises in the near future.
As Maley points out, the cryptocurrency remains under pressure near its highs of $69,000 to $65,000 reached in the middle of November and the middle of April.

In the event that Ether manages to hit and hold a new all-time high while Bitcoin remains in a downturn, Maley believes that “it will demonstrate that Ether has emerged as the new cryptocurrency of choice for the majority of investors.”

The technical prognosis for Ether in relation to Bitcoin has also been indicating that the former will experience stronger bull runs in the future.

For the ETH price, a prolonged bullish breakout could be in play

Because of the most recent round of buying, the Ethereum to Bitcoin exchange rate has broken over a multi-month resistance trendline that forms an ascending triangle pattern, and the pair is now on the verge of embarking on an extended bull run towards 0.1 BTC, as depicted in the chart below.

The majority of the time, ascending triangles are continuation patterns, which means that they have a tendency to send prices in the direction of their previous trend by a distance equal to or greater than the maximum height between the upper and lower trendlines measured from the breakout point.

The breakout point for ETH/BTC is approximately 0.077 BTC, while the maximum height of the triangle is approximately 0.022 BTC. Ideally, this would put the ETH/BTC pair on a path to 0.1 BTC, but given the unpredictable nature of the cryptocurrency sector, anything is feasible at this point.