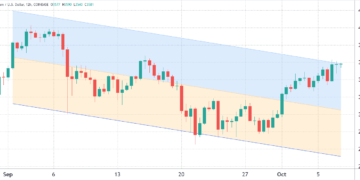 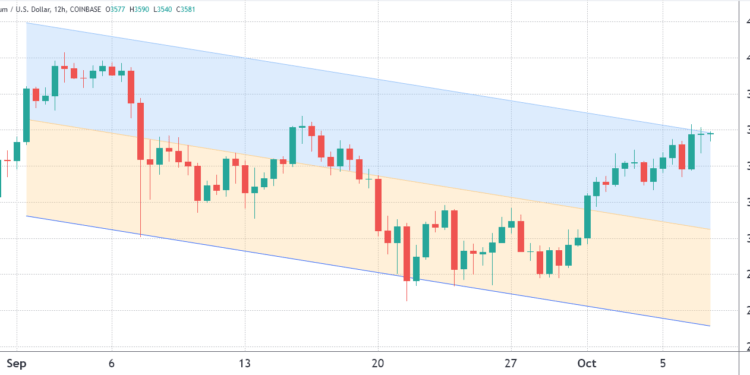 Since Sept. 1, Ether (ETH) has been trapped in a bearish regression channel, however it is currently trying to break through its barrier.

Despite these challenges, ETH bulls are expected to earn $115 million on Oct. 8’s weekly Ether option expiration. The 21% rally over the last week was enough to wipe out the whole $250 million of neutral-to-bearish put options.

Negative stories concerning increased governmental attention toward cryptocurrencies, as well as China’s complete ban on any cryptocurrency activities, may have contributed to the recent decline in values, which is understandable.

Major cryptocurrency exchanges, like Binance and Huobi, have suspended the majority of their services in mainland China, and a couple of the largest Ethereum mining pools have been forced to close their doors completely as a result of the disruption.

Following that, there was bad press.

In response to the regulatory uncertainty surrounding cryptocurrencies, the founder of Citadel Securities, one of the world’s largest market-making businesses, stated that the company does not trade cryptocurrencies. The chairman of the Russian State Duma Committee on Financial Markets has also expressed concern about tightening laws to safeguard individual investors, among other things.

In light of the unfavorable newsflow, it is easy to see why bears put 86 percent of their bets at $3,200 or lower. Those put (sell) options, on the other hand, have certainly lost value in recent weeks, as a result of the recent market volatility.

The expiration on October 8 will be a litmus test for bearish since any price increase beyond $3,500 will result in a slaughter due to the absolute domination of call (buy) options.

To look at it another way, the $210 million in call (buy) options outnumbered the $250 million in neutral-to-bearish instruments by a factor of 16 percent in terms of weekly expiry.

The call-to-put ratio, on the other hand, is misleading because the recent ETH gain will almost certainly wipe out the majority of their bearish bets if Ether’s price continues above $3,500 at 8:00 a.m. UTC on Friday morning. If the price of ETH is trading below $4,000, there is no monetary value to a right to acquire it at that price.

Bears should throw the towel and take the $115 million loss

Notably, 94 percent of the put options, which give the buyer the right to sell Ether at a pre-determined price, were purchased for $3,500 or less, according to the data. It is possible that Ethereum will trade above that price on the morning of October 8 and that these neutral-to-bearish instruments will become worthless.

The four most likely outcomes, based on current price levels, are listed below, with the possible profit from the expiry represented by the imbalance favoring either side of the equation.

In this table, the number of contracts that will be available on Oct. 8 is shown in relation to the expiry price.

Specifically, call (buy) options utilized in bullish strategies and put (sell) options used primarily in neutral-to-bearish trades are included in this crude assessment. However, because of this oversimplification, more complicated investing techniques are not taken into consideration.

Example: A trader could have sold a put option to earn positive exposure to Ether above a specified price, essentially increasing his or her exposure to the cryptocurrency. Unfortunately, there is no simple way to evaluate the magnitude of this effect.

According to the foregoing forecast, the bear will make a $47 million profit by pressing the price below $3,500. By pushing the options expiration price above $3,800 on October 8, bulls might boost their advantage by $49 million, putting them in a position of strength.

As things stand right now, bulls have complete control heading into the October 8 expiration, and the incentives for both sides to try to push the price $200 higher or below the current level appear to be equal. Consequently, bears should throw in the towel and prepare for the expiration next week.