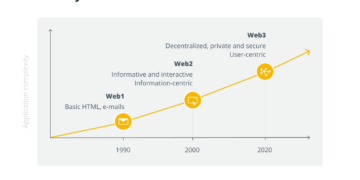 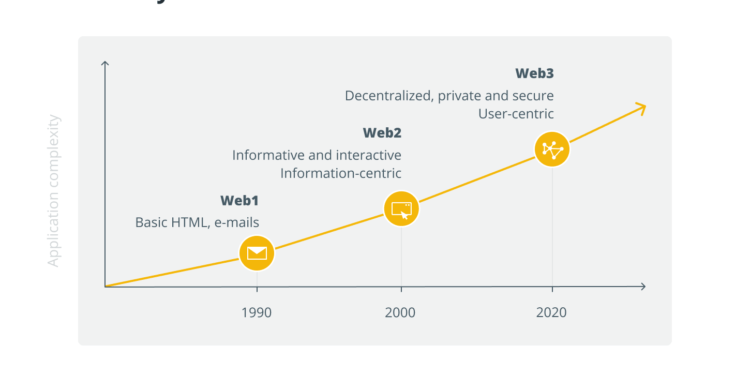 Even though the modern internet connects us like never before, one thing that younger generations haven’t really felt is real privacy.
Even people who were born a long time ago don’t remember what life was like before we had to keep track of everything we did and thought.

Web3 wants to make the internet a more open, trustless, and permissionless place where people can talk to each other without giving up ownership control, privacy, or relying on third-party intermediaries.

One of the most important tools for that vision is the blockchain, which is one of them.
Because they don’t need to be trusted, they help to build a direct relationship between users and service providers. They record the rules of engagement on immutable ledgers, as well as directly capturing and recording interactions between them.
Blockchains also fundamentally change the structures and power balances in the ownership of data.

With the help of blockchains, people can now avoid centralized websites and expensive middlemen and communicate directly with each other with end-to-end encryption.
People can buy things like homes or works of art, use public resources, and make high-level decisions.
Using a decentralized platform, the control and management of these processes is also much easier because third parties can’t get their hands on data unless everyone agrees to let them.

Blockchains that are used today are “pseudonymous,” which means that each user is identified by an alphanumeric string of characters called a public key. This is how users can be identified.
However, when there are connections between the activity in a transaction and metadata, it can be hard to be pseudonymous.
This makes one of the main benefits of blockchain worthless and could potentially give everyone in a network private information.

We may not know who Satoshi Nakamoto is, but we can look at the transactions that happen at their addresses and see how much money they make and spend.
Several blockchain forensics companies, such as CipherTrace and Elliptic, use the digital ledger to keep track of money transactions on the blockchain.

“front-running” has recently been seen in the ever-growing world of blockchain-based markets, where miners can see trades that aren’t visible to them.

When a miner can read the plain-text transactions that people send on the blockchain, they can put their own transactions in front of everyone else’s and get the best deals.
The maximal-extractable value (MEV) is the amount of value that miners can get out of the system by front-running. This value is what users would get if they didn’t run ahead of the other people in the system.

As of January 2020, miners have taken value from people who use Ethereum. They have taken hundreds of millions of dollars worth of value.
Clearly, this is a problem that needs to be solved by the business.

To answer this question, we need to know where the layers of the blockchain that give real privacy are.

As things are now, privacy has not been given the attention it needs and deserves.
There were other things that were more important for the blockchain community to work on instead. For example, they worked on the scalability, speed, and cost issues that have kept blockchain from becoming a common technology.

If you do something you don’t mean to, that’s not the only thing.
There is a good technical reason why web apps can’t run on existing blockchain architectures today.
Everyone on a blockchain is currently forced to re-run all transactions in order to check the state of their ledger. This means that every service on a blockchain is effectively sharing a limited, global computer resource.

Another reason privacy hasn’t been given much attention is that it’s very hard to make sure.
It’s a lot of work to make privacy tools faster and easier to use.
Privacy isn’t easy to get, but that doesn’t mean it shouldn’t be important.

The first thing to do is to make privacy easier for the person.
Privacy in crypto should not require complicated workarounds, shady tools, or a lot of knowledge about complicated cryptography. This should not be the case.
People who use blockchain networks, like smart contract platforms, should be able to choose how much privacy they want. This should be as simple as clicking a button.

Security measures built into the Blockchain technology could answer these calls for privacy and accountability at the same time.

There are two technologies that could change how we think about internet privacy and help us regain control over the personas we create online. Zero-knowledge proofs (ZKPs) and secure multiparty computation (sMPC) are two of them.

It will be possible for the internet to become a place where only we can see our private information.
Some solutions have their own problems, but each one has its own drawbacks as well.

While ZKPs can make simple transfers, they don’t let people work together.
And even though sMPC can be used by many people, it can be very slow on its own.
The obvious thing to do is to combine both technologies together to get rid of the problems and make a fast, secure, and private platform for Web3 projects.

There was a lot of focus on scalability, speed, and cost that left little time or money for privacy.
But that’s history.