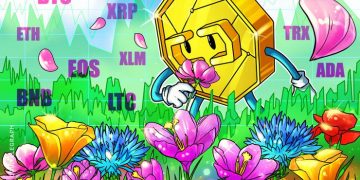 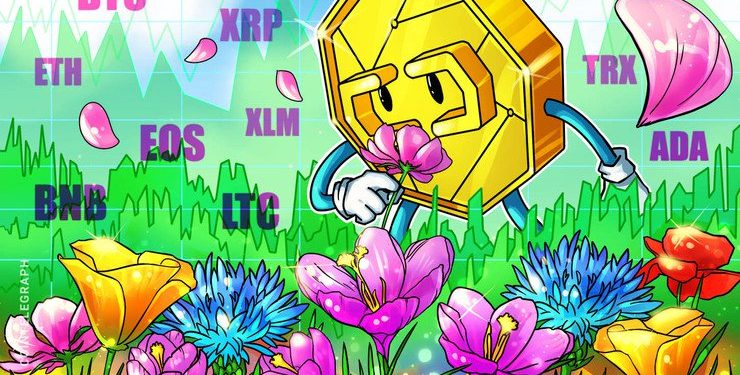 The research arm of Binance believes that cryptocurrency markets have bottomed out, after studying data from 2014–2019. They also found that the total institutional holding in the crypto market was about 7% of total supply.

Endowments are making the most of the bear market in cryptocurrencies. In 2018, 94% of endowments allocated money to crypto related investments. Another positive is that they expect to retain and increase their investments in the future.

Co-founder and CEO of BitMEX Arthur Hayes wants to launch a cryptocurrency options platform to give the traders more tools to play with.

Bitcoin (BTC) has bounced off the support at $4,914.11 but lacks momentum. It has been grinding up for the past two days, which shows a lack of urgency among the bulls to push prices higher. However, both the moving averages are sloping up and the RSI is close to the overbought zone. This shows that the path of least resistance is to the upside.

Our bullish view will be invalidated if the pair turns down from the current levels and plunges below the 20-day EMA. This will attract profit booking by the longs and initiation of short positions by the bears. Below the 20-day EMA, the fall can extend to the 50-day SMA. Therefore, traders can raise the stop loss on the remaining long positions to $4,700. Let’s play it safe.

Ethereum (ETH) is once again trying to break out of the overhead resistance at $167.32. If successful, it will complete the ascending triangle pattern, which has a target objective of $251.64 and higher. The rise might face a minor resistance at $187.98 but if the bulls clear this level, the up move is likely to pick up momentum.

On the other hand, if the ETH/USD pair fails to sustain above $167.32, it might face selling pressure. A breakdown of the 20-day EMA can sink the price to the 50-day SMA. The moving averages are flattening out and the RSI is also gradually correcting toward the midpoint. This points to a consolidation in the short-term. We should see a decisive move within the next few days. Until then, traders can protect their remaining long positions with the stop at $150.

Ripple (XRP) has held the support at 50-day SMA but is facing resistance at the 20-day EMA. The resistance line of the descending channel is also just above the 20-day EMA. If the bulls scale this resistance, the digital currency can move up to $0.37835. If the price sustains above the channel, it will indicate a likely change in trend.

However, if the XRP/USD pair turns down and breaks below the 50-day SMA, it can drop to $0.27795. Both the moving averages are flat and the RSI is just below the 50 level. This suggests a consolidation in the near term. As the pair has not participated in the current pullback, we shall wait for a confirmation of a change in trend before recommending a position in it.

The BCH/USD pair will lose strength if it turns around from the overhead resistance and dives below the 20-day EMA.  $239 is the major support on the downside, below which, the pair will turn negative. We shall wait for a reliable buy setup to form before suggesting a long position in it.

Litecoin (LTC) held the 20-day EMA for the past three days, which is a bullish sign. However, the rebound from this support is facing selling at higher levels. If the bulls fail to push the price above the overhead resistance of $91 within the next few days, the bears will again try to sink it below the 20-day EMA.

EOS is trying to resume the recovery. On the upside, the bulls will face resistance at $6.0726 and above it at the resistance line. If both these levels are crossed, the rally can extend to $6.8299, which is likely to act as a major barrier. Presently, both the moving averages are sloping up and the RSI in positive territory. This shows that the bulls have the upper hand.

Contrary to our assumption, if the EOS/USD pair turns down from the current level and plunges below the 20-day EMA, it can drop to $4.4930–$3.8723 support zone. We expect this level to hold. If that happens, the pair might remain range bound between $4.4930 to $6.8299 for a few days. But if the support zone fails to hold, the digital currency might fall toward the lows.

Binance Coin (BNB) has risen above the downtrend line and is on its way to the overhead resistance of $22. The pullback from the April 11 low indicates strength. We expect the bulls to push the price above $22 and retest the lifetime highs at $26.4732350. A breakout to new lifetime highs will be a huge sentiment booster to the whole sector as it will prove that the January 2018 highs can be scaled.

Both the moving averages are sloping up and the RSI is in the positive territory. This indicates that the path of least resistance is to the upside. Though we are bullish, we do not find a trade that has an attractive risk to reward ratio. We shall wait for a reliable buy setup to form before proposing a trade in it. Our bullish view will be negated if the BNB/USD pair turns around from one of the overhead resistances and slips below $15.50.

Stellar (XLM) is facing resistance at the 20-day EMA for the past three days. The 20-day EMA has flattened out and the RSI has dipped to 50. This points to a consolidation in the short term.

However, if the bulls push the price above the 20-day EMA, the XLM/USD pair can move up to the downtrend line. The pair will signal a trend change if the price sustains above the overhead resistance at $0.14861760.

On the contrary, if the bears reverse direction from the current levels, the digital currency can slide to the 50-day SMA. It will turn negative on a breakdown of the uptrend line. We will wait for a reliable buy setup to form before recommending any long positions in it.

Cardano (ADA) has held the 20-day EMA for the past three days. This shows buying at the support but the bulls have failed to carry the price higher. A breakout above the downtrend line will be the first sign of strength.

Until then, the bears are likely to attempt to break down below the 20-day EMA once again. The zone between the 20-day EMA and $0.075920 is a critical support. If this support fails, the ADA/USD pair can plummet to the 50-day SMA.

However, both the moving averages are sloping up and the RSI is still in the positive zone. This shows that the bulls are likely to defend the support zone. The pair will pick up momentum on a close (UTC time frame) above $0.094256. Currently, we remain neutral on the digital currency.