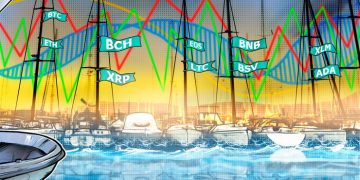 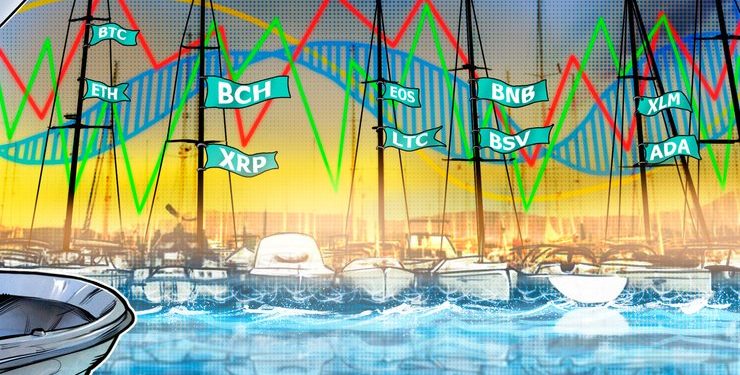 Michael Novogratz, founder and CEO of cryptocurrency merchant bank Galaxy Digital, believes that the adoption of the blockchain technology by mainstream technology companies and interest by Wall Street firms helped start the rally. He now expects Bitcoin to remain range bound between $7,000 and $10,000.

Bitcoin has seen a massive run in 2019. When the price is appreciating so much, it is unlikely that many people would spend their Bitcoin. Research by Chainalysis suggests that only 1.3% of economic transactions for Bitcoin came from merchants in this year.

Considering the high volatility, Susquehanna’s Bart Smith believes that Bitcoin investment is “certainly speculative.” However, we believe that with the right strategy, the risk in trading cryptocurrencies is no greater than trading in equities or any other traditional asset class. What do the charts project for major coins? Let’s find out.

Bitcoin (BTC) spiked up above $9,000 on May 30 but quickly reversed direction and fell to a low of $8,034.31 within a few hours. Currently, the bulls are attempting to hold the price above $8,000. The trend remains bullish as both the moving averages are sloping up and the RSI is in the positive territory. But the negative divergence on the RSI warrants caution.

If the BTC/USD pair rebounds from the current levels and rallies above $9,053.12, it can reach the next overhead resistance of $10,000. However, if the bears sink the pair below the 20-day EMA, it can slide to the next support at $7,413.46. The digital currency will lose momentum if this support also breaks.

After the quick fill and stop loss hit on our trade recommendation, we will play it safe and avoid suggesting short-term positions. We will wait for a reliable buy setup to form before proposing a trade.

Though both the moving averages are sloping up and the RSI is in the positive zone, the negative divergence on the RSI is giving a warning signal.

A breakdown of the 20-day EMA can sink the ETH/USD pair to $225.39. If this support also breaks down, the fall can extend to the 50-day SMA. We do not spot a bullish pattern at current levels.

Ripple (XRP) attempted to scale above the overhead resistance zone of $0.45–$0.47919 on May 30 but failed. This resulted in a quick drop to close to the 20-day EMA. Currently, the bulls are attempting to keep the digital currency above the 20-day EMA, which is trending up. If successful, we might see another attempt to push the price above the overhead resistance zone and towards the target objective of $0.60.

Bitcoin Cash (BCH) is in an uptrend. It has been trading above the 20-day EMA and below the resistance line of the ascending channel for the past few days. A breakout of the channel is likely to propel it to $638.99.

The RSI has formed a large negative divergence, which is a bearish sign. If the BCH/USD pair breaks down below the 20-day EMA, it can slip to the 50-day SMA. Below this support, a dip to the support line of the channel is probable. We will wait for a reliable buy setup to form before recommending a trade in it.

EOS triggered both our proposed buy level and the stop loss within a few hours. It thereafter plunged to the support of $6.8299 where buying emerged. Currently, the bulls have again pushed the price above the channel. They will now try to scale the overhead resistance at $8.4790. Above this level, a rally to $9 and above it to $9.60 is possible..

Both the moving averages are sloping up and the RSI is in positive territory. This shows that the bulls are in command. Our bullish view will be invalidated if the EOS/USD pair reverses direction from close to $8.4790 and breaks down of $6.8299.

The spike in Litecoin (LTC) stalled at $120.1518. Hopefully, traders would have closed 50% of the long positions around these levels, as suggested in the previous analysis. The trend remains up as both the moving averages are sloping higher and the RSI is in the positive territory. We are keeping a close watch on the negative divergence on the RSI.

A failure to defend the 20-day EMA will start a deeper correction towards $91. If this support breaks, the LTC/USD pair will turn negative in the short term. Therefore, traders can keep the stops on the remaining long position at $90.

Another possibility is that the BNB/USD pair enters into a range before launching the next up move. As the cryptocurrency is in a strong uptrend, we will suggest a long position once we spot a reliable buy setup.

However, if the bears sink the pair below the 20-day EMA, it can slide to the 50-day SMA. This is a critical support to watch out for because if this breaks down, the bears will have the upper hand.

Bitcoin SV (BSV) has reached eighth place in terms of market capitalization after skyrocketing higher on May 29. That was followed by a hugely volatile day on May 30, when it reached close to the lifetime highs and then flash crashed to a low of $44.765, all within a few minutes. Thereafter, the price recovered and by the end of the day, the loss was limited to 11.42%.

Conversely, a breakdown of $169.669 can plunge the pair to $149.767. This is an important support, below which the digital currency can dip to $121.432. A vertical rally is unsustainable, hence, a few days of consolidation cannot be ruled out. The cryptocurrency is very volatile and the risk is very high, hence, we shall not suggest a trade in it.

On the downside, the bulls are attempting to defend the 20-day EMA. Both the moving averages are flattening out and the RSI is just above the midpoint, which points to a consolidation in the short term. If the XLM/USD pair dips below $0.11507853, it can drop to $0.08641170. Traders can wait for a close (UTC time frame) above $0.14861760 to initiate the trade as suggested in our earlier analysis.