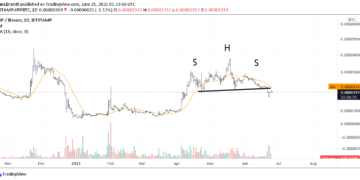 XRP price will fall to new lows vs. Bitcoin if this famous chart pattern plays out

XRP price will fall to new lows vs. Bitcoin if this famous chart pattern plays out 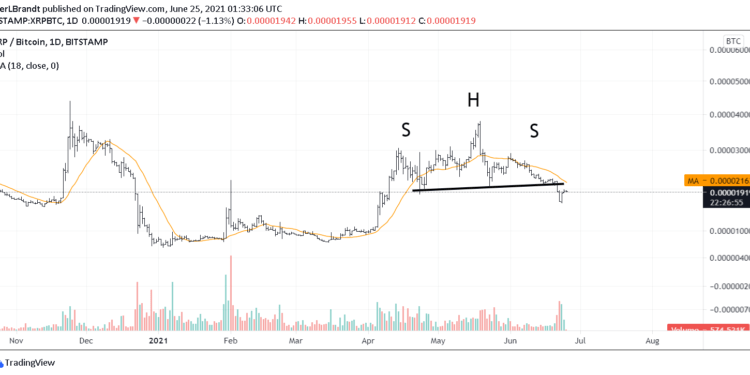 According to a classic technical indicator, the native token of the Ripple blockchain, XRP, could experience a full bearish price swing against Bitcoin (BTC).

Known as the Head and Shoulders (H&S) pattern, it is formed when an asset forms three distinct peaks on top of a common baseline.
The outer peaks, known as Shoulders, are relatively close in height, whereas the middle peak, known as the Head, is the tallest of the three.

When the asset breaks below its baseline support with high volumes, the H&S pattern is complete, confirming a negative breakout and completing the pattern.
The so-called neckline also serves as the most common entry point for bearish traders who are attempting to reach deeper levels of the market’s downside.
Although not always the case, the profit target for an H&S pattern is equal to the distance between the pattern’s high point and its neckline in the majority of cases.

A H&S pattern is painted on the XRP/BTC instrument, according to Peter Brandt, CEO of Factor LLC, a global trading firm he founded in 1980 and is based in New York.
In a tweet published early Friday morning, Brandt raised the possibility that the bearish indicator could cause the Ripple token to become “a tidal wave” against the Bitcoin cryptocurrency.
The highly experienced trader went on to say:

“Completion of the [H&S pattern] would set [XRP/BTC] target at all-time-lows.”

But as XRP/BTC approaches its record low levels, the pair would still need to pass through a series of strong support levels.

The XRP/BTC exchange rate bounced off the 200-day simple moving average (200-day SMA; the saffron wave) support level of 1,696 satoshis, which represented the 200-day SMA support.
It is highly likely that the pair will continue to trade above the wave and test the H&S neckline at around 2,120 satoshis in the near future.
In the meantime, a close above 2,120 satoshis would render the H&S structure null and void.

Breaking below the 200-day simple moving average, on the other hand, exposes XRP/BTC to the next line of support near 1,555 satoshis.
During the month of November 2020, the level played a crucial role in propelling the pair upward by more than 170 percent.
In spite of this, its Volume Profile indicates a decline in trading activity in recent years, raising the possibility that it will be unable to handle high selling volumes as the H&S breakout progresses faster than expected

Currently, according to the Volume Profile indicator, the last line of defense is worth 847 satoshis, which is more than twice as much as the H&S profit target of 326 satoshi.

Against the US dollar, XRP continued trending lower in its months-old descending channel pattern, while promising short-term upside opportunities.

The XRP/USD rebounded by up to 44.53% after testing the Channel’s support trendline on June 22. The pair’s upward movement saw it test $0.69 as interim resistance, with bulls eyeing a longer-term push towards $0.78 as the next target.

Let’s see if $BTC allows price to even get close to $0.79 in the short term… pic.twitter.com/PhHR7OJCQQ

Between November 2020 and April 2021, the $0.69-per-share level has served as a point of resistance.
Meanwhile, the $0.78-level prevented the XRP/USD pair from extending its downward trend throughout the month of May 2021.