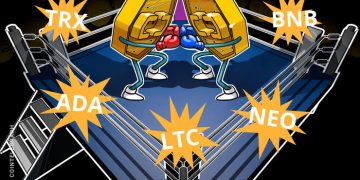 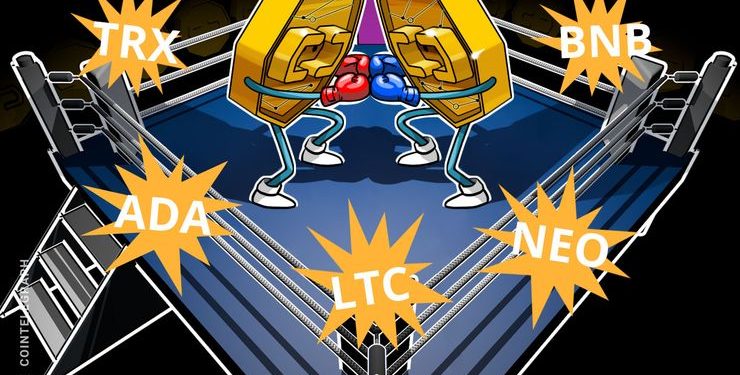 After a strong start in 2019, the crypto markets have witnessed sharp selling that dragged the prices down by about 10 percent on Jan. 10. This indicates that the process of bottom formation will be volatile.

The traders should aim to book quick profits and trail their stops higher to protect any potential profits. The important event that turned the tide in favor of the bears was the 51 percent attack on the Ethereum Classic network.

The crypto markets had topped on Jan. 7, 2018, reaching a total market capitalization of over $835 billion. From there, most of the top cryptocurrencies reversed direction causing a huge erosion in wealth. Even after one year, we can not confirm that the markets have bottomed out and are now on the way up.

However, in 2019 the prices could by boosted by any positive regulatory developments, Bitcoin exchange-traded fund (ETF) approval, or increased institutional interest. Until then, what should the traders do? Let’s study the charts of the top 5 performers among the top coins to gauge the current sentiment.

Tron was the best performer in the past week, as it bucked the trend and stayed comfortably in the green. The company has acquired the peer-to-peer torrent client BitTorrent in August 2018. Last week, the latter has launched its own Tron-based cryptocurrency called BTT.

Justin Sun, the founder of Tron, expects this move to increase the reach of blockchain to hundreds of millions of users. However, Simon Morris, former chief strategy officer at BitTorrent, has opined that the Tron blockchain does not have the capacity to manage the transaction volume needed to tokenize BitTorrent.

In other news, Tron has hired former SEC supervisory attorney David Labhart as its head of compliance. Will the performance of the digital currency continue for the next few days? Let’s find out.

The TRX/USD pair has mostly been trading inside the range of $0.0183–$0.02815521 since mid-August of last year. Although the bears had broken down of this range in mid-November, they could not capitalize on it.

After trading close to $0.011 for about five weeks, the bulls staged a smart recovery that pushed the price above the resistance of the range at $0.02815521. However, the breakout was momentary, as sellers pounced at higher levels, dragging the price back into the range.

We anticipate a new uptrend if the price breaks out and closes (UTC time frame) above $0.02815521. Currently, both moving averages are flat and the RSI is also close to 50 levels, which suggests that range bound action might continue for a few more days. Our view will be invalidated if the bears sink the price back below $0.0183.

Short-term traders can buy closer to the bottom of the range and sell near the top of the range. However, as the price action inside the range can be volatile, traders should keep their positions small.

If the rumor turns out to be completely false, the price might fall. So, what should the traders do?

The NEO/USD pair has a tendency to consolidate before breaking out or breaking down. The two previous attempts resulted in a breakdown of the range, followed by extended fall.

Currently, the cryptocurrency is again stuck in a range with support at $5.4808 and resistance in the $10–$12 zone. Both moving averages are sloping down and the RSI is also close to the oversold zone. There are no signs of a reversal forming on the charts yet.

The previous consolidation had lasted for 13 weeks and the current one has so far been going on for seven weeks. We expect the price to remain stuck in the range for a few more weeks, before it breaks out or breaks down.

We suggest investors wait for a trend reversal to be signaled before initiating any long positions.

The market participants are awaiting the release of Project Shelly that will help Cardano shift from a centralized platform to a decentralized one. Will this upgrade propel the digital currency higher in the near future? What should the traders do now?

The ADA/USD pair is in a downtrend. It continues to make lower highs and lower lows. Both moving averages are sloping down and the RSI is also in the negative territory. The previous two pullback attempts have been shallow, which points to a lack of buyers.

A break of the recent low of $0.027237 will resume the downtrend. On the upside, a move above $0.1 will indicate strength. We suggest traders wait for a bullish pattern to form before buying.

Binance has revealed plans to launch one new token every month of this year through Binance Launchpad, its exclusive token launch platform. Will this give a much needed boost to the struggling initial coin offering (ICO) market?

The BNB/USD pair has been trading inside the descending channel for the past few months. The bulls are struggling to break out of the resistance line of the channel. If the bears sink the price below $5.4666, a retest of the recent low at $4.1723848 is probable. If this support breaks, the fall can extend to the support line of the channel.

Our neutral-to-bearish view will be invalidated if the pair breaks out of the channel. The pattern target of such a breakout is $15, with a minor resistance at $12. Therefore, investors can wait for a breakout and close (UTC time frame) above the channel to initiate long positions.

If the price remains stuck inside the channel, buying can be done close to the support line of the channel and profits can be booked closer to the resistance line of the channel. As this is a counter-trend trade, the position size should be about 40 percent of usual.

The total amount of litecoins in circulation has reached 60 million on Jan. 12. That number represents about 71.5 percent of the total 84 million that can be mined. The last litecoin is expected to be mined somewhere in 2142.

In the wake of the 51 percent attack on Ethereum Classic, Charlie Lee, creator of Litecoin has said that a decentralized network “must be susceptible to 51% attack,” because otherwise it does not meet the requirements of being decentralized.

The downtrend will resume if this support breaks. Both moving averages are sloping down, and the RSI is in the negative zone, which shows that the bears currently have the upper hand.

The previous two consolidations had resolved to the downside. Hence, we recommend traders wait for a buy setup to form before initiating any long positions.