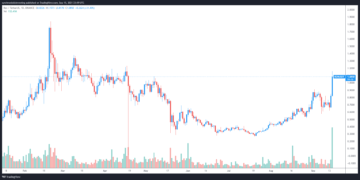 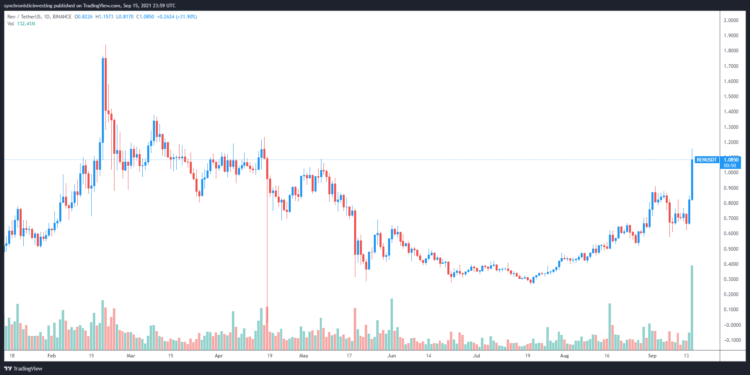 Interoperability has emerged as one of the most important themes in the cryptocurrency market. The importance of communication and efficiency among decentralized applications (dApps) will grow as the blockchain ecosystem develops into a web of layer-one protocols that communicate with one another.

Ren (REN), a blockchain protocol designed to provide interoperability and liquidity between multiple blockchain platforms, has begun to gain traction in recent weeks as activity in the decentralized finance (DeFi) sector has increased over the last month and a half.

The rapidly increasing activity and total value locked on RenVM, the deployment of a bridge to Arbitrum, and the release of RenVM Greycore on the network’s testnet are all contributing factors to the price increase seen in REN.

REN’s bullish momentum can be found in the data for the total network volume and total value locked (TVL).

During the course of 2021, new chains were added to the list of bridges supported, which currently includes Ethereum, Binance Smart Chain, Solana, Polygon, Fantom, Avalanche, and Arbitrum, among other cryptocurrencies.

Each new bridge has contributed to an increase in traffic volume and transmission line length (TVL) on the Ren network, which has corresponded with changes in the REN network.

It is believed that the release of the Arbitrum bridge, which is a layer-two scaling solution for Ethereum (ETH) called Arbitrum, was the primary reason for the price increase that occurred on September 15. Arbitrum is intended to run popular decentralized applications in a fast, low-fee environment.

High transaction costs and long transaction delays have made it impossible for many users to use DeFi or nonfungible token (NFT)-related protocols on the Ethereum network, making it difficult to implement these protocols.

Holders of Bitcoin (BTC) have found Arbitrum to be an enticing DeFi setting because of its low-cost environment.
With the migration to the layer-two solution, they will be able to communicate on the network through the use of renBTC.

By the 15th of September, the total value locked on Arbitrum via the Ren protocol had reached $7.75 million, as depicted by the green line in the value locked chart displayed in the image above.

REN is moving toward decentralization

The introduction of RenVM Greycore on the network’s testnet on September 13 was a third factor contributing to the surge in activity for REN. This move was made as the project works toward its objective of complete decentralization.

Greycore is a semi-decentralized validator group of nodes that are maintained by respected DeFi projects, and it contributes to the protocol’s overall security by providing an additional layer of protection.

Among the first projects to sign on with Greycore was BadgerDAO, a DeFi project dedicated to developing products that introduce Bitcoin to the DeFi ecosystem.

According to data from Cointelegraph Markets Pro, the market for REN has been in a good state for quite some time now.

An analytical assessment of past and present market circumstances produced from a variety of data points including market sentiment, trading volume, recent price changes, and Twitter activity is available only to Cointelegraph readers and is called the VORTECS™ Score.

REN’s VORTECS™ Score went green on September 13 and rose to a high of 71 on September 14, which coincided with the beginning of a 72 percent gain in the price of REN during the following two days.