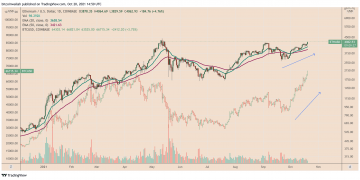 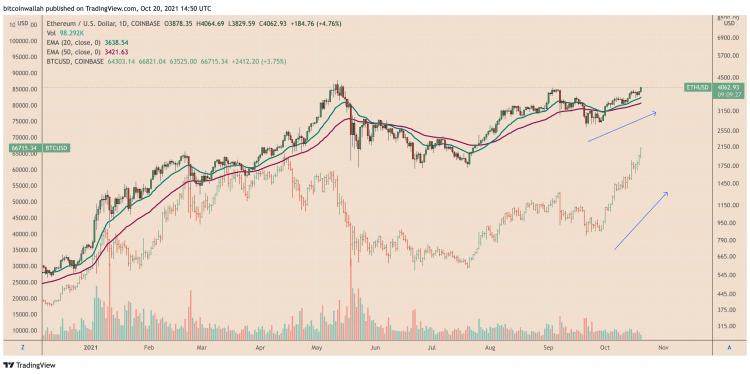 It seems expected that Ether (ETH), the native token of Ethereum, will set a new all-time high in the near future, since the cryptocurrency has broken over a key resistance level of $4,000.

The price of Ethereum (ETH) increased by more than 5% on October 20th, approaching $4,100 on the Coinbase platform for the first time since May 2021. The cryptocurrency’s surge above $4,000 occurred mostly as a result of Bitcoin’s (BTC) breakout above $65,000 and entry into the price discovery phase.

The capacity of bitcoin to participate in price discovery, as a result, opens the door to similar opportunities for Ether, which is currently trading a few hundred dollars below its current all-time high of $4,385 per coin.

“If Bitcoin can reach new all-time highs, I don’t see why ETH can’t,” said Rekt Capital, an independent market analyst, who went on to say:

The most recent ETH pump increased the cryptocurrency’s year-to-date earnings by around 450 percent, compared to Bitcoin’s year-to-date profits of 130 percent. That also increased the likelihood that Ether will outperform Bitcoin in the future sessions, allowing it to reach values significantly higher than Rekt Capital’s $4,400 estimate.

On Wednesday, the price of ETH broke over the top trendline of the Triangle. Despite this, the rise to the higher was followed by a decrease in trading volume, which suggests that ETH may retest the trendline as support in the near term.

The cryptocurrency had been painting an Ascending Triangle structure, with a $6,500 price objective on the upside, as previously reported.