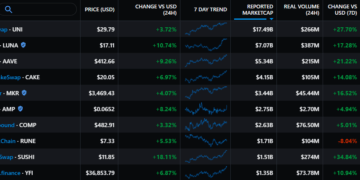 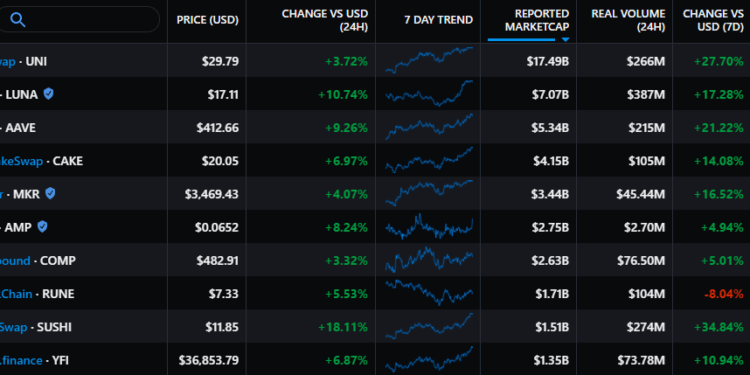 Decentralized finance (DeFi) has played a significant role in the explosive growth seen across the cryptocurrency ecosystem in 2021, as decentralized exchanges such as Uniswap and SushiSwap, as well as lending protocols such as Aave and Compound, have added a new dimension of token utility to the ecosystem.

According to data from Messari’s DeFi Asset index, a majority of the top 10 DeFi tokens have gained more than 20% in value over the past 30 days, with Terra (LUNA) being the biggest gainer with a price increase of more than 116 percent.

Among the positive aspects for DeFi tokens are a quickly recovering total value locked, increasing trading volumes on decentralized exchanges, and the nonstop addition of new users to the DeFi ecosystem.

According to data from DeFi Llama, the total value locked (TVL) on DeFi platforms is creeping closer to its previous all-time record of $155 billion, with the amount currently standing at $140.56 billion.

Rising token prices, as well as more activity and deposits in the DeFi ecosystem, are all reflected in the increasing TVL value.
During the last month, the Crypto Fear and Greed Index experienced a shift from Extreme Fear to Greed, indicating a positive shift in public perception of cryptocurrency markets.

DEX volumes are on the rise

The increasing daily trading volume on decentralized exchanges (DEX), led by Uniswap, is another another indication that the DeFi sector is waking up. According to statistics from Dune Analytics, the volume on DEX has been progressively increasing since the latter week of July.

It was despite the rising cost of doing a transaction on the Ethereum network, which has been increasing since the introduction of the London hard fork, that the DEX activity increased.

Although traders were more reluctant to pay the high transaction charges associated with DeFi on Ethereum during the recent negative market, the rapid uptrend in token values appears to have encouraged users to brave the higher fee environment in the hopes of catching the rising stars.

A steady stream of new users engage with DeFi

The increasing number of users entering the DeFi area is a third indicator that DeFi activity and token values are likely to continue to rise in the future.

In accordance with data from Dune Analytics, the number of new users, as measured by unique addresses engaging with DeFi protocols, has increased in both bull and bear market situations, reaching a record high of 3,181,408 users in the most recent quarter.

As new users become involved in the expansive DeFi ecosystem and transfer funds from the traditional financial system to the crypto economy, the value of tokens may continue to rise as investors become more interested in the sector as attractive yields and the ability to participate in protocol governance increase investor interest.

The London hard fork of Ethereum did little to alleviate the concerns about high transaction costs, which have been exacerbated further by the rising price of Ether. As a result, the future of DeFi is still a new frontier where layer-two solutions such as Polygon and competing networks such as the Binance Smart Chain and Cardano can look to increase their market share.