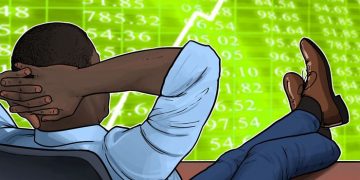 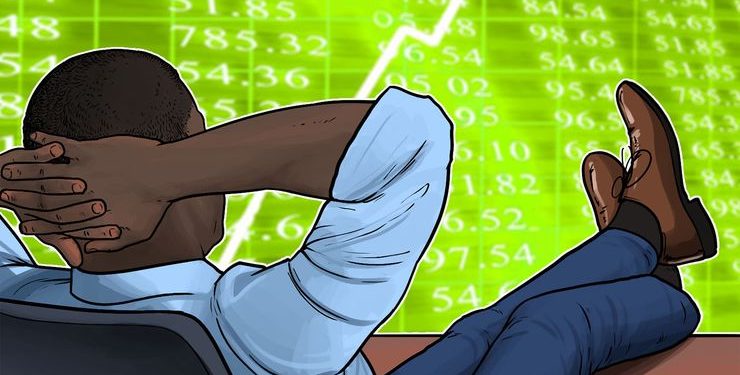 Monday, Oct. 15: Crypto markets are seeing solid growth, with virtually all of the major cryptocurrencies seeing green as of press time. An outlier in the space is “stablecoin” Tether (USDT), which has today lost its U.S. dollar peg and is trading well below its historical trading range as of press time.

Tether is currently trading at around $0.96, down about 3.05 percent on the day, according to CoinMarketCap.

Although reasons for the USDT price plunge are not confirmed, there have been reports of an alleged loss of market trust leading to a possible sell-off: yesterday, a Bloomberg article suggested that investors are “losing faith” because of the ongoing lack of transparency surrounding Tether’s claims to be backed one-to-one by the US dollar.

In the past, critics have accused Tether of operating a fractional reserve and covering over its alleged reserve deficit in complicity with associated exchange Bitfinex, with rumors mounting when Tether allegedly dissolved its relationship with a third-party auditor this January.

At the end of this June, an unofficial audit of Tether confirmed that the stablecoin had the appropriate amount of dollar holdings as compared to its token issuance.

As reported Oct. 8, Bitfinex has also been prompted to officially respond to online rumors that claimed the exchange was “insolvent” and possibly facing banking issues.

The exchange’s rebuttal was partly prompted by reports that its banking partner, Puerto Rico’s Noble Bank International, is now seeking a buyer and had lost both Bitfinex and affiliated firm Tether as clients. In response, Bitfinex stated that all Noble-related allegations “have no impact” on its operations, survivability, or solvency.

Several days later, Bitfinex temporarily suspended all fiat wire deposits for the euro, U.S. dollar, japanese yen, and pound sterling. As part of its original statement Oct. 8, the exchange had indicated that “complications continue to exist” for Bitfinex “in the domain of fiat transactions,” but had said this is something prevalent among “most” crypto-related organizations.

On Oct. 15, Bitfinex released another statement noting that a new fiat deposit system will be available by Tuesday, Oct. 16.

Crypto twitter has been rife with responses to Tether’s market performance. One humorous tweet reposted an alleged Binance “announcement” about the fake delisting of Tether: 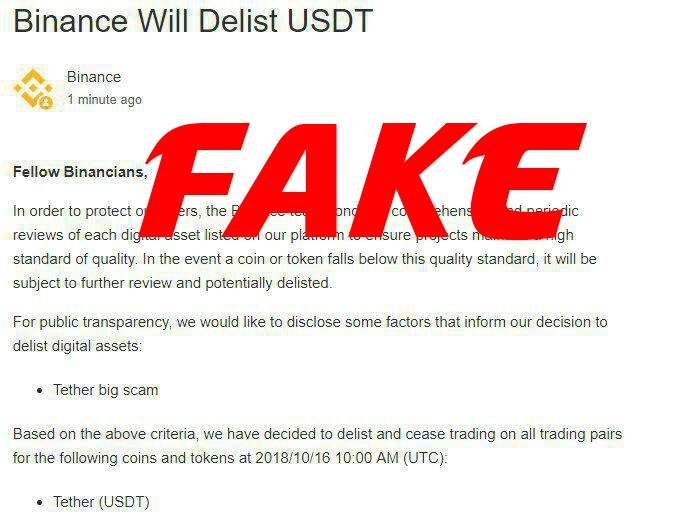 The accompanying tweet states that Binance “is VERY politically correct,” and would “never write ‘Tether big scam’ (it doesn’t even make grammatical sense). This is just as bad as the ‘Vitalik is dead’ scam last year.”

The unusual situation with Tether has had a pronounced effect on Bitcoin (BTC) prices on Bitfinex, which are currently at a premium. As of press time, Bitcoin is trading at $6,934 on the exchange.

In terms of its market-wide average, after several days of heavy losses on the crypto markets, Bitcoin has has seen solid growth on the day and is up around six percent to trade at $6,691 at press time, according to CoinMarketCap. This brings its weekly growth to around 1.22 percent: on the month, Bitcoin is up around 2.6 percent. 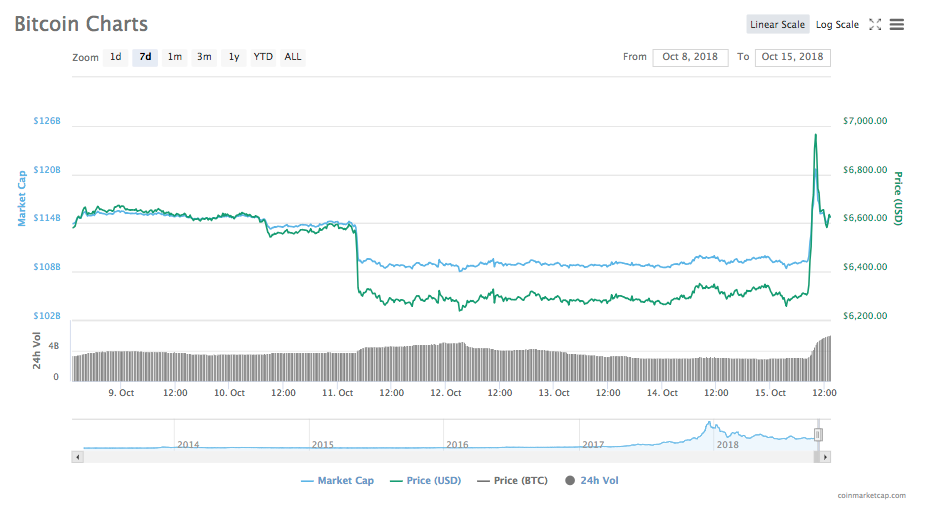 Ethereum (ETH) is also up a strong six percent and is trading at around $213 at press time. Following its intra-week low of $189 on Oct. 12, the altcoin has seen several days of weak price performance, circling $200 before today’s major spike.

On the week, Ethereum is almost six percent in the red; monthly losses are around a milder two percent. 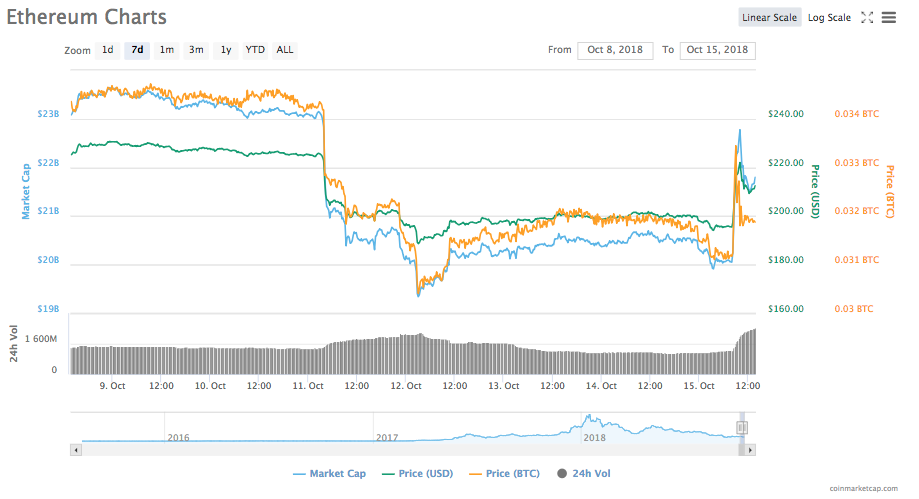 Ripple (XRP) is up close to eight percent at press time to trade at $0.45. Having shed value during the market-wide losses Oct.11-14, Ripple today remains around seven percent in the red on its weekly chart. Nonetheless, due to its outstanding price performance in September, Ripple’s monthly gains remain at close to 61 percent. 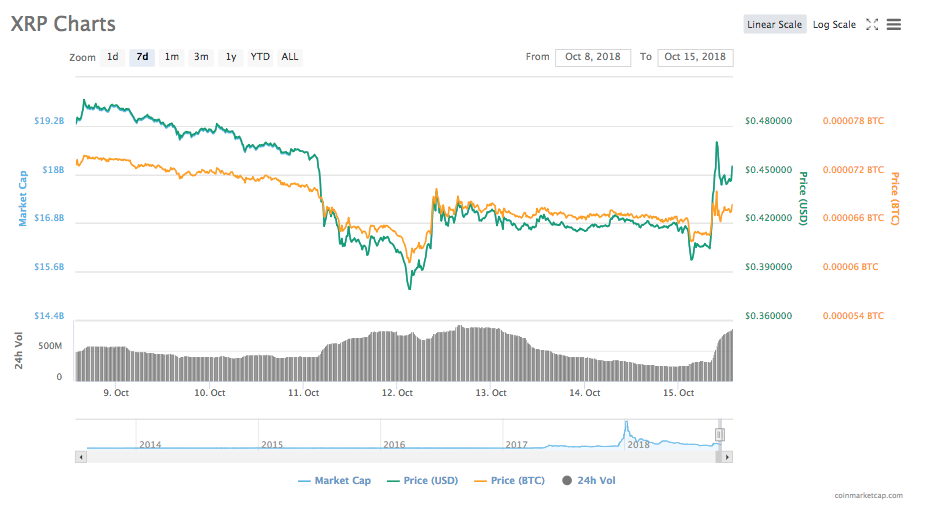 The remaining top ten coins on CoinMarketCap are all seeing growth. Stellar (XLM) is up around 5.4 percent to trade at $0.23, EOS (EOS) is up around five percent and trading around $5.50, and Litecoin (LTC) is up three percent at about $54.93.

Total market capitalization of all cryptocurrencies is down to around $213.4 billion as of press time — having reached as high as $220.2 billion earlier today.