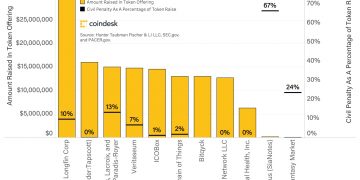 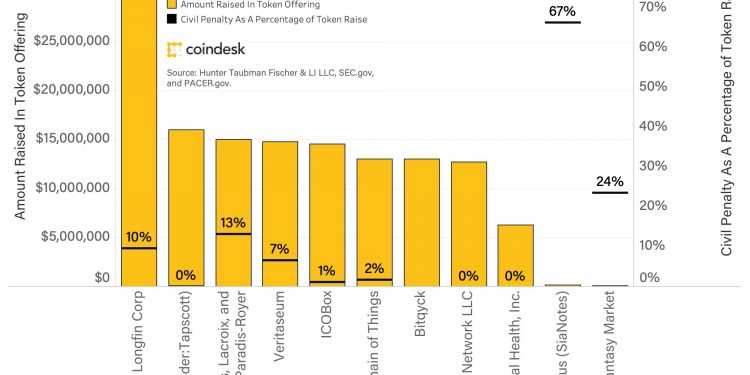 In January, two new ICOs completed in 2018 were charged by the U.S. Securities and Exchange Commission (SEC) with fraudulent sales of unregistered digital asset securities. The individuals and entities charged in these cases are still awaiting a final judgment and fine. However, in both cases, the SEC has recommended all funds raised by the ICOs be paid back to investors.

ICOBench reports that, as of Feb. 6, almost 5,700 projects have collectively raised over $27 billion since the first ICO in July 2014. ICOs are a way to fund early stages of a crypto venture by selling a certain number of tokens created by the startup in advance of product launch. New breeds of ICOs called initial exchange offerings (IEOs), which capitalize on the sale of exchange tokens specifically, have begun to emerge in the last year.

For now, token sales of any sort that are sold to U.S. residents and not registered with the SEC remain in violation of federal securities laws and subject to fines.

The SEC issued warnings as recently as last month advising individuals and entities against participating in or launching ICOs.

Consider: Between 2016 and 2020, the SEC filed charges against 27 completed ICOs. This number does not include the number of ongoing investigations by the regulator or the cases that have yet to publicly disclose settlement terms.

As a result of the SEC’s strong enforcement, there has been greater caution among cryptocurrency investors who have participated, or are planning to participate, in this form of fundraising. ICOBench reports the total monthly funds raised by ICOs declined from a high of $3.45 billion in 2018 to $18 million at the start of 2019.

How the SEC operates

The majority of token offerings the SEC has gone after were completed during the ICO boom of 2017 when over 550 sales raised $7.3 billion, according to figures from Smith and Crown. However, the earliest recorded token sale to have been penalized by the SEC was completed in May 2014 during the offering for “Sianotes,” which ultimately raised $120,000.

In 2016, the Boston-based Nebulous, which conducted the Sianotes offering, was required to pay back the full amount raised during the offering, plus $24,602 in prejudgement interest and a civil money penalty of $80,000.

The three main monetary weapons at the disposal of the SEC to fine companies that conduct unregistered securities offerings are disgorgement, civil penalties and prejudgment interest.

Disgorgement is the repayment to investors of gains the SEC deems to be from illegal or unethical actions. It is meant to be a restorative rather than a punitive charge.

Civil penalties, on the other hand, are intended as a punishment for wrongdoing, with the harshest penalties handed down on cases with clear evidence of fraud and substantial risk of or actual investor harm.

Finally, prejudgement interest is a calculated fee based on the amount of disgorgement and civil penalties that has been negotiated during a trial.

The SEC can also seek remedy for the violation of federal securities laws by placing injunctions and restrictions on an individual’s ability to work in the securities industry or serve as an officer or director of a public company. The SEC cannot, however, put people in jail.

Looking at the SEC’s punitive charges over time against companies or individuals that have conducted ICOs, amounts vary wildly from $0 to as much as $24 million. In the cases where there was no civil penalty, the SEC specified its rationale in filings, highlighting the remedial actions already taken by the company or individual.

For example, in the case of Gladius, a Nevada-based blockchain cybersecurity services company, the SEC wrote that the company took “prompt” remedial steps to self-report to the commission, cooperated with SEC staff and promised to comply with federal securities laws in future.

The largest civil penalty ever handed down by the SEC for an ICO was against Block.One, the startup that raised the largest amount of money ever in a token offering. Between June 2017 and June 2018, Block.One managed to sell $4.1 billion worth of its EOS ERC-20 token. In September 2019, the SEC levied a $24 million fine for conducting an unregistered securities sale.

Not all civil penalties are proportional to the amount raised in offerings.

The SEC also looks at factors other than the amount raised when judging which offering companies to go after and how much to penalize, according to securities lawyer Mark Hunter. These factors include (but are not limited to) where the victims and wrongdoers are located, whether or not there is an identifiable group that was targeted for a sale and the “press-worthiness” of a company, individual or product.

“Are they [the company or individual] the hot topic of the month or quarter?” Hunter said, referencing cases like Block.One, which received wide news coverage for being the largest ICO in history.

At the end of the day, measuring how the SEC picks and handles its cases is “more art than science,” Hunter said. “There were times when [I] was sure the SEC was going to go after a particular person or group and they didn’t. Other times, when [I] thought this didn’t seem like something the SEC would use its resources for and they’re all over it. Anybody that could forecast with certainty would be some extremely successful counsel.”

In the first month of 2020, the SEC has already laid charges against two new ICOs. The amount of disgorgement, civil penalty and prejudgement interest has not yet been settled for these cases.

Given the lack of transparency into the process, details such as the timing and state of SEC investigations into ICOs that are ongoing or soon to launch are difficult to predict. What can be expected with some level of certainty from public filings in years prior is the number of charges is set to increase significantly this year.

As the number of SEC-penalized ICOs goes up, the importance of regulatory compliance for investors strengthens. High-profile cases carried over from 2019, such as the Telegram and Kik ICOs, will act as important bellwethers for U.S. regulatory sentiment regarding blockchain technology and its reach in consumer markets. The outcome of Peirce’s “Token Safe Harbor” proposal unveiled this month will also be a crucial signal from regulators to the public.

Each new enforcement action this year will teach us much about ICO financing and business models, and the SEC’s regulatory focus. The creation of new ICOs, IEOs and other forms of financial innovation in the crypto markets is be affected, for better or for worse.