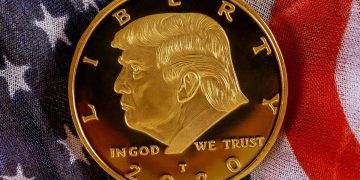 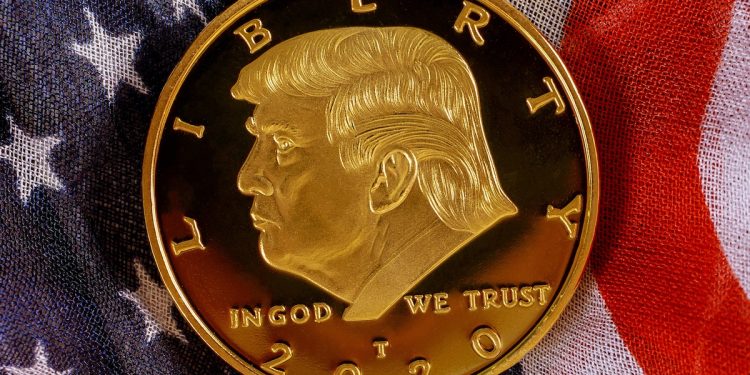 They’re “not money,” he wrote in July, saying their value is “highly volatile and based on thin air.”

Now, crypto traders outside the U.S. can make their feelings known – and perhaps some money – on the 45th U.S. president. This week a digital token, Trump 2020 with the symbol TRUMP, launched courtesy of cryptocurrency exchange FTX.

“TRUMP expires to $1 if Donald Trump wins the 2020 U.S. presidential general election, and $0 otherwise,” FTX says in a posting on its website.

Some online sites, such as Oddschecker.com, have set up venues to bet on the coming election, which is shaping up to be historic: Trump is expected to be the first incumbent president to face voters following an impeachment trial. The president was acquitted Wednesday by the Republican-controlled U.S. Senate of impeachment articles brought by the Democratic-controlled House of Representatives.

But the new FTX contract might represent the crypto industry’s first attempt to cash in on the polarized voter climate surrounding Trump’s 2020 prospects.

Theoretically, the token’s price should track roughly in line with the perceived odds of a Trump victory.

“If you think there’s a 52 percent chance of Trump winning, then TRUMP should trade at $0.52,” according to FTX. “Buying below there would be good, as would selling above $0.52.”

The token, which went live earlier this week, is currently trading at 62 cents after Trump’s acquittal, implying a 62 percent chance he’ll get four more years in Washington.

FTX is owned by a parent company based in Antigua and Barbuda, according to the firm’s website. It’s led by Sam Bankman-Fried. His LinkedIn profile shows him to be a former trader with the New York-based firm Jane Street who jumped into the crypto industry in 2017. He’s now based in Hong Kong.

For traders leery of the risks of volatile crypto markets, FTX posts a warning on the binary nature of the TRUMP token’s ultimate payoff: Price swings might be even more volatile than the notoriously up-now, down-now bitcoin. (Bitcoin is up 36 percent so far this year to about $9,800, after the price nearly doubled in 2019.)

“The risk profile of TRUMP is different from BTC,” according to the website. “It has significantly higher chances of making a large move (to $0 or $1).”

Addressing the potential for irregularities in the general election, the new TRUMP token comes with terms mapping out a contingency plan if the results are muddy and Trump refuses to leave office: “In the event that some set of electoral votes cannot be projected” and it’s impossible to determine the winner, “this contract will settle to $1 if Donald Trump is still president on February 1st, 2021, and $0 otherwise.”