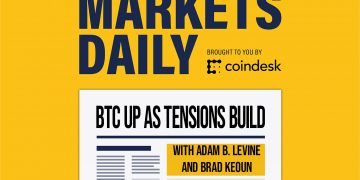 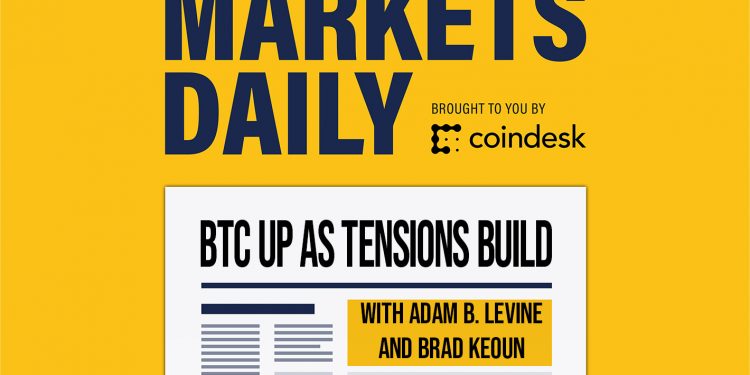 Bitcoin is bouncing with geopolitical tensions heating up following U.S. confirmation of a high-profile drone strike in Iraq. Then, we’ll talk “Proof of Keys Day” in the year 2020 and more.

Tune in as CoinDesk podcasts editor Adam B. Levine and senior markets reporter Brad Keoun run down recent action, track interesting longer-term trends and highlight some of the most important crypto industry developments of the day.

No time to listen? Scroll down for the transcript with full links.

Having trouble with the embedded player? You can download the MP3 here.

Adam B. Levine: It’s January 3, 2020, and you’re listening to Markets Daily, I’m Adam B. Levine, editor of podcasts here at Coindesk, along with our senior markets reporter, Brad Keoun, to give you a concise daily briefing on crypto markets and some of the most important news developments in the sector over the past 24 hours.

Adam: With geopolitical bombshells dropping in the overnight, Brad’s got the story…

Since midnight London time bitcoin is up 5.5 percent, erasing a price slide we saw during the first two days of 2020, and leaving prices just slightly positive during the year so far

It’s tough to state with precision exactly how the strike could affect bitcoin prices in the long term, but in the short term the U.S. military action appears to have pushed up global oil prices, given Iran’s status as one of the world’s biggest oil producers, and the potential for an escalation of the conflict between the two countries

Higher oil prices could potentially contribute to inflation, and according to Ian Shepherdson at the forecasting firm Pantheon Macroeconomics, a sustained oil-price increase could make traders nervous about future economic growth

This plays into one bitcoin price narrative, since many investors view the cryptocurrency as a hedge against inflation, a so-called “store of value” like gold

Adam: Turning to the news, BlockFi, a cryptocurrency lending firm backed by investors including Galaxy Digital and the Winklevoss twins, says in a blog post that it plans to offer a new BTC rewards card that will pay out rewards in bitcoin when users make purchases, as an alternative to airline miles or cashback

According to the company, the new credit card could provide a QUOTE novel way to introduce crypto to non-owners in an easy, familiar way END-QUOTEAnd CoinTelegraph reports that the U.S. Securities and Exchange Commission filed a court order on Thursday seeking to compel the messaging platform Telegram into releasing details on how it spent some $1.7 billion from an initial offering of its gram tokens

Telegram has pushed back against the charges, and legal analysts say the outcome of the case could set an important precedent for future capital-raising in the crypto industry

Brad: Bitmain, the giant Chinese maker of computers used to mine bitcoin, reportedly plans to cut about 50 percent of its staff in the next several months

The news comes via Cointelegraph, which in turn cited Chinese news media

Bitmain, which saw both a slew of management changes in late 2019 as well as some aggressive sales initiatives like limited price guarantees for big wholesale customers and even rental options, describes the latest move as a QUOTE personnel optimization plan END-QUOTE

According to CoinTelegraph, the layoffs are expected to be completed prior to bitcoin’s upcoming “halving” expected in May, when the rewards for mining data on the bitcoin blockchain will be reduced by 50 percent, in accordance with the network’s 11-year-old design

And in a twist of gallows humor, Dovey Wan, co-founder of Primitive Ventures and a prominent observer of China’s crypto industry, joked on twitter that the Bitmain layoffs appeared to be the first halving of 2020

Adam: And for today’s featured story, it’s January 3rd, known in the community as Proof of Keys Day. The movement behind this community holiday celebrates January 3rd each year as the date on which all cryptocurrency users should take custody of any coins kept on an exchange, check your long term token storage, or anywhere else outside your direct control. The argument here is that blockchain tokens, unlike a bar of gold, or a physical stock certificate can be easily retrieved and verified, even if just temporarily. And if there’s one thing we’ve seen in the markets over the last half dozen years, it’s that keeping your tokens in a custodied exchange isn’t a sure, or even necessarily safe bet.

While the tradition is currently followed by a relatively small percentage of cryptocurrency holders, its purpose is both unique and pretty smart given the space. Done en-masse, this is effectively a regularly scheduled “run on the bank” except the bank is the entire cryptocurrency exchange system. As the saying goes, when the tide goes out you get to see whose swimming naked, or in this case is an exchange who looks insolvent. In traditional finance, bank runs are often seen as apocalyptic as the interdependent financial system can potentially lead to one seemingly insignificant failure dragging down much larger and even more deeply connected counterparties. But in crypto, things don’t have to be that way. So this movement takes the perspective that the only way you can ensure that your exchange can survive a mass wave of withdrawls, akin to a bank run, is if in real life they can survive an annual exercise where that actually happens. Think of it as the equivalent of the annual stress tests that the Federal Reserve makes the biggest banks undergo.

Now, for many traders, the idea of holding tokens anywhere besides an exchange can make them anxious and it’s not without reason. One of the clarion calls of Bitcoin and many early cryptocurrencies has been the opportunity to “Be your own bank,” which is about as powerful as you’d imagine but which comes bundled with a level of responsibility and related fear that you’ve got it wrong which makes this something of a mixed blessing in practice.

For those who have looked at their tokens primarily as an investment which they hold on an exchange like everything else, Not Your Keys, Not Your Coins presents a reminder today, or really on any day of the year that while blockchains give you the ability to completely control all of your coins and really put your exchange to the test, you can also just take the opportunity to learn the basics, set up a simple wallet on your phone and take possession of a single token.  It can be nerve-wracking to truly be responsible for your investments, we’re just not used to it, and why would we be? Before tokens it really wasn’t possible. Not your Keys, Not your Coins is a low-impact, low-stress way to get a firsthand look at the personal control and related responsibility which underlying everything, this industry is really about.

If you’d like to learn more, visit ProofOfKeys.com, and if you have any questions or thoughts send us an email at [email protected]

Adam: And now, for today’s spotlight, we’re looking at 2020 predictions published in recent days by the popular cryptocurrency exchange Binance

Brad: As we move into 2020, there are a lot of predictions flying around on what the new year promises for the crypto industry, from a potential price rally linked to bitcoin’s so-called halving, to the potential flowering of new lending and trading platforms in what is known as decentralized finance, where the functions of financial firms are essentially replicated on platforms that are distributed across many users and computers

Today we’re going to highlight a couple of predictions made in recent days from the popular cryptocurrency exchange Binance and its colorful CEO, known to his fans as CZ

He’s a charismatic and sometimes polarizing figure in the crypto world, epitomized by the fact that some of the company’s top executives have gotten Binance tattoos to match his own

Well in a blog post on Thursday, addressed to Binancians, CZ wrote that one of Binance’s key goals for 2020 is to QUOTE bring crypto to the masses END-QUOTE

He predicted that by 2030, cryptocurrencies will be used to pay for self-driving rides on Uber, in addition to funding biotech research

And in a separate post early Friday, Binance said it plans to allow customers to trade bitcoin, ether, ripple and a few other tokens against the euro, for the first time

This move by Binance comes as some investors and economists are speculating whether the dollar might lose some of its mojo in the 2020s as the dominant global reserve currency, especially in the face of challenges from rapidly advancing digital-asset technologies

In his blog post, CZ wrote that he sees Binance’s core mission as spreading the freedom of money

And while the company’s most high-profile success has come from its centralized cryptocurrency exchange, Binance.com, he said that the company’s leaders QUOTE strongly believe in decentralization END-QUOTE, embodied in recent efforts to create a decentralized exchange

Tying back to the crypto industry’s potential to replace cash, CZ wrote that he believes fiat will co-exist with crypto for a long time

According to the post, QUOTE more than 99.9% of the money supply is still in fiat, and we need to build bridges, gateways, teleport portals, or whatever you call it, to bring them into crypto END QUOTE

Who knows what the future will bring, and Nostradamus he’s not, but given CZ’s cult-like following, a lot of people in the crypto world may pay attention

Adam: Join us again on Monday,  for the next Markets Daily from CoinDesk.  To make sure you never miss an episode, you can subscribe to Markets daily on Apple Podcasts, Spotify, Google Podcasts, and just about any other place you’d like to listen. If you’re enjoying the show, we really appreciate you leaving a review. And if you have any thoughts or comments, email [email protected]