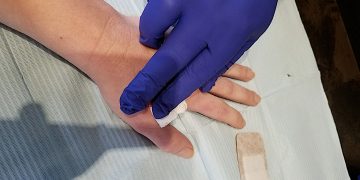 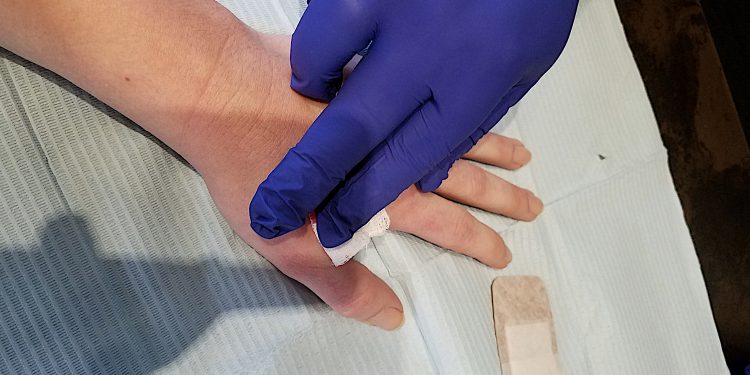 “What happens when you need an MRI?”

Someone answers for me: “You die an excruciating death… Actually, they remove them painfully quickly or the machine does.”

I’m sure these paranoid, exaggerated remarks didn’t help as I sat down at the folding table in front of a large man with a 14-gauge needle. I was sweating through my shirt.

“Are you gonna pass out?” he asks.

It’s literally right on my face – in the form of a septum piercing – that I’m pretty familiar with needles.

“Three, two and one,” the man with the needle said as he pushed it into the squishy part of my left hand, between my thumb and index finger.

It was all of one second of pain, and then it was over. I hardly even bled.

And just like that, I was now officially a cyborg.

So, what the hell am I doing here? Well several years ago, in 2014, I stumbled on this guy, Martijn Wismeijer, aka Mr. Bitcoin, who had gotten a microchip implant that he then programmed to hold his cryptocurrency.

I doubt I really knew much about the transhumanism movement back then, but I have always been fascinated with robots and the idea of melding robots into humans or vice versa. This seemed right up my alley, as even back then, I was basically covering crypto full-time, so I started reaching out but communication eventually dropped off and it was all but forgotten.

Until this January, when Bryan Bishop, the Bitcoin Core developer that’s known for his tremendously fast typing and in turn his transcriptions of conferences, mentioned BDYHAX to me. “There’s a lot of transhumanists in the bitcoin community,” he said.

But the conference’s agenda had already piqued my interest – “Implantable Tech Area.”

Bishop’s right – at least anecdotally, that there’s an overlap between the body hackers and the bitcoiners. Transhumanism does, in fact, link them. Bitcoin pioneer Hal Finney seems to have been one, since he cryogenically froze his body, hoping that sometime in the future he might be able to be resuscitated.

It probably doesn’t come as much of a surprise that folks that believe technology can create a better future as it relates to money, payments, shit just about everything, would think that technology can also make humans themselves better.

Funded with his bitcoin savings, Bishop’s project, recently written about in MIT Technology Review, looks to allow parents to genetically engineer their babies to have features like muscles without ever picking up a dumbbell or enhanced memory.

If that sentence sounds weird – almost like adding apps to your smartphone – it’s because it kinda is. There’s mounting criticism and concern over the practice, especially after a Chinese biophysicist named He Jiankui claimed he’d made the first genetically edited babies.

If you give your imagination even a tiny bit of wiggle room, you can see why.

Do parents have the right to choose how their children look and act? This can’t be a cheap procedure; will everyone be able to edit their children to be smarter or will it only be the rich that benefit? Will we lose some humanity if everyone edit’s themselves for the flavor of the week?

Yet for all those dystopian futures (that I very much see and worry about), ultimately some of this could no doubt be beneficial and save hundreds of thousands, maybe even millions of lives.

For instance, one of Bishop’s first examples – something we talked about in the Fall last year – was making humans resistant to HIV.

Future humans will think we’re barbaric if we resist this kind of medical achievement.

While I’m not so interested, and even slightly disturbed, by genetic beauty enhancements such as muscles or blue eyes, I worry these concerns could push this type of biohacking into the shadows.

And that’s a shame.

We’ve seen a similar thing happen in the cryptocurrency space.

There are hacks, scams, fucking idiots and all sorts of bad things lurking in the blockchain scene, and typically that’s made many turn up their noses to the whole industry. They lump it all together and mark it “useless,” “nefarious,” “shit.”

And I get it. I look around the crypto industry, after being here for six years, and see rot. I see individuals who only want to make quick money at the expense of others; I see companies touting their disrupting finance but actually enstating the same, arbitrary, discriminatory rules as legacy banks.

Where the fuck did the ethos go?

I’ll tell you. It might be hard to see through all the “sky is falling” – or during a hype cycle all the glitz of free money – but it’s in Venezuela, helping people literally starving because of their corrupt government, hold onto some value. It’s in the lightning torch, hopping all around the world, showing people the power of a stateless digital currency.

And because those instances exist, I’ll take some of the bullshit.

Because that’s what I’m here for – an alternative to the systems that were created without my input and sometimes do not work for, to be more clear work against, me and other individuals.

Case in point, for some in the biohacking space, healthcare is too costly and big pharma, insurance providers, even doctors are working against the people, the individuals who need care.

For cryptocurrency aficionados, the great monolithic entity to disrupt is the Federal Reserve, state monetary policy, the banks.

There’s an overlapping “distrust of formal institutions,” Bishop told me. “They have gotten so large and bureaucratic, it’s sometimes more practical to go your own way and see what you can get done. Even more specifically, some people see certain regulations directly interfering with people’s right to live.”

He gives the example of a DIY biohacker figuring out a way to make insulin cheaper and then offering that to diabetics, which would be technically illegal.

As with all these anarchist attempts, Don Andres Ochoa, a biotechnologist and data scientist speaking at the event, gave the best rallying cry:

“Fuck it, let’s fix the problem ourselves.”

These two fields of research “are not directly useful to each other, but there’s a common source of inspiration,” Bishop said.

And they do mix together at a certain point. For instance, because of the controversy surrounding designer babies today, Bishop is cognizant that cryptography-backed privacy tech will likely play some role – if nothing else, at least as it relates to anonymous payments for the service.

Still, all this stuff seems outrageous to the majority of people.

“Right now, the idea or concept of body hacking is literally bleeding edge (ha),” said Amal Graafstra, the founder and CEO of VivoKey, the maker of the implant I got.

With implants, as with cryptocurrency, “the overlap is directly related to people’s sense of adventure,” he continued.

Case in point, Jerrah Cameron, a Denver-based programmer, who stumbled upon the body hacking scene only about a month ago and already has three implants – two small chips and this larger NFC chip, for which he had a gnarly one-inch slice on the side of his right hand.

For the novelty these devices provide so far – I currently have my chip programmed to take an NFC-enabled phone to my “receive bitcoin” QR code, making it fast and easy for someone to send me a tip – most people won’t want to get poked, he said.

That’s why he’s working on an application that would allow the chips to be used as payment mechanisms, housing first the tokens needed for apps like Apple Pay, Google Pay or Venmo, and then in the future even cryptocurrencies.

And VivoKey is also working on something similar.

In a week or so, Graafstra and his team plan on releasing an API that can allow developers to program one of their chips (yes, the one I have! squee) to act as an authenticator key. With this, users should be able to request that their chip be tapped to verify any send or transfer of crypto within a wallet.

“The idea was to develop a completely autonomous secure element under the skin,” Graafstra told CoinDesk.

And the company also offers a chip (not the one I have) that can actually complete key generation and the signing of a transaction all within the chip. That’s currently in private beta and requires quite a lot of programming to make it all work, so it’s not ready for mainstream use yet.

So for now, my hand isn’t worth any more than it was when I was just a boring old human (although it has facilitated $2 worth of bitcoin).