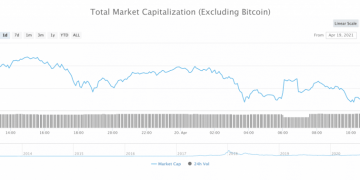 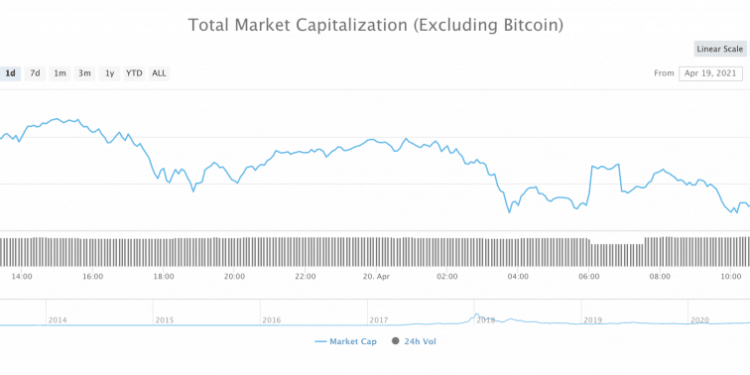 For weeks, the price of Bitcoin was steadily rising. For weeks, Ether and other altcoins were following along. Money was flowing into crypto markets with no apparent end in sight, and then.

Within the past 24 hours, crypto’s total market cap has shed some $200 billion, falling from $2.1 trillion to $1.9 trillion, approximately 9.52 percent. Simultaneously, the price of Bitcoin has fallen more than 5 percent, dropping through the $60K support line for the first time in nearly a week. Altcoin markets have followed suit: the total altcoin market cap has dropped from $1.032 trillion to $924 billion, a loss of roughly 10.5 percent.

Looking Forward to Meeting You at iFX EXPO Dubai May 2021 – Making It Happen!

Meanwhile, there is one crypto asset that seems to be defying the odds, for better or for worse.

Indeed, while other altcoins are facing steep corrections, Dogecoin (DOGE) is surging. The price of DogeCoin rose nearly 20 percent in the 24 hours before press time and is up 450 percent over the past seven days.

The coin has been the subject of much controversy since the start of the year. For one thing, its returns are absolutely jaw-droppingly high. The price of DOGE has risen from $0.004886 on January 1st to $0.41 at press time, an increase of more than 8,200 percent.

The coin’s proponents, who count the likes of Elon Musk, Snoop Dogg and Gene Simmons among them, are continuing to sing DOGE’s praises. SouljaBoy appears to be the latest celebrity to have jumped on the train with a simple, one-word acknowledgement of DogeCoin.

However, critics of the coin say that it has no fundamental value and that DogeCoin holders are playing a dangerous game.

Meanwhile, the value of DogeCoin keeps climbing, and the coin’s advocates seem to be pushing it further and further. DogeCoin holders on Twitter are attempting to make today, April 20th, ‘DogeCoin Day’; many hodlers are trying to push the price of the coin to $0.69 by the end of the day. (Why? Do the math.)

According to Fortune, the current round of DogeCoin mania seems to have been spurred by a rather unlikely source: Slim Jim.

For those of us who have never graced the tiled floors of the great American institution known as 7-Eleven, a Slim Jim is a prolific packaged meat product that is shaped like a long thin tube. Slim Jim jumped onto the Dogecoin bandwagon last week when its Twitter account posted an image of rocket images spelling the word “DOGE” with the phrase “RT to send Doge to the moon!!”

According to Fortune, “the cry worked. Doge fans, and even other brands, jumped on the bandwagon quickly.” The official Twitter account of Snickers (yes, the candy bar) tweeted on Monday “Guess what day it is? #DogeDay. Tomorrow? #DogeDay420 ???? (not an actual Snickers pack, just a cool #doge gif).”

Guess what day it is? #DogeDay. Tomorrow? #DogeDay420 ???? (not an actual Snickers pack, just a cool #doge gif) pic.twitter.com/9GAeFsRJU9

It’s All Fun and Games until Someone Gets Hurt

While the Twittersphere’s newfound love of Dogecoin seems to have an air of playful excitement, some analysts and investors are worried that the fun may be going a little too far.

Billionaire crypto advocate and Galaxy Digital Founder Mike Novogratz pointed to DOGE last week in an interview with Bloomberg TV about overbuying in altcoin markets. At the time, Novogratz said that “[Dogecoin] is a memecoin…it doesn’t really have a purpose.”

“It’s reminiscent of GameStop,” Novogratz said, referring to the WallStreetBets (WSB) investors that pumped millions into GameStop stock (NYSE:GME) and several other ‘meme stocks’ for the sole purpose of ‘squeezing’ hedge funds on Wall Street earlier this year. “I would be very, very worried if one of my friends was investing in Dogecoin at these prices.”

Actually, the DogeCoin rally that is currently underway seems to have its roots in the WSB movement. In February, a spinoff group of WSB investors targeted DOGE as their next asset to ‘pump’. The rise continued when Tesla Founder, Elon Musk, publicly showed his love for DogeCoin on Twitter in a week-long series of pro-DOGE tweets.

This #DogeDay is dedicated to the man, the myth, the legend, the Technoking of Tesla, the Imperator of Mars, Destroyer of Shorts, Master of Memes, King of Twitter, Humanity’s Best, the one and only: @ElonMusk!

Mike Novogratz: “There Is a Retail Frenzy. It’s Not Really Being Seen in Bitcoin and Ethereum.”

But beyond Elon and the Dogecoin hype crew, some analysts believe that DogeCoin could be rallying because of elevated interest across altcoin markets.

James Putra, Head of Product Strategy at TradeStation Crypto, told Finance Magnates that: “many altcoins rallied simply as retail investors attempt to seek out the next bitcoin.”

Indeed, as Bitcoin has gotten bigger and bigger, the list of corporations and institutional investors that added BTC to their balance sheets continued to grow. However, retail investors chasing higher returns seem to have increasingly sought lower-priced altcoins.

Mike Novogratz explained the phenomenon this way: “there is a retail frenzy,” he said. “It’s not really being seen in Bitcoin and Ethereum. Quite the opposite: money is coming out of Bitcoin and Ethereum and moving into these other coins for more juice, for more excitement.”

Putra explained that: “Like penny stocks, many retail investors are attracted to low-priced cryptoassets. The downsides are altcoins tend to be further out on the risk curve, many coins are still early in their developmental lifecycle, and many are still simply ideas with an altcoin.”

Similarly, Arnab Naskar, Co-Founder of STOKR, told Finance Magnates that “there’s a lot of money flowing into the cryptocurrency industry, and there will always be those who believe they’ve found the next Bitcoin. Diversification is normal on the stock market, so many new investors try to follow a similar strategy on the cryptocurrency market.”

“Unfortunately, the fundamentals you have with many stocks are simply not there, which makes diversification out of Bitcoin an extremely risky endeavour.”

Nothing Gold Can Stay

What’s next for DogeCoin? The People’s Reserve (TPR) digital currency consultant, Shaune Clarke told Finance Magnates that: “the Doge rally is bound to end at some point.”

“While some WSB-type retail investors might be realistic about the fate of Doge, and in their own world-weary way, they’re ready to lose everything to prove a point (or because they find it fun), the reality is there are people betting their life savings on Doge hoping to be millionaires.”

If it seems like an exaggeration, let it be known that a number of Reddit users have made posts about betting large portions of their life savings on DogeCoin. NewsWeek picked up one such tale with the headline “Dogecoin Investor Becomes Millionaire After Putting Life Savings Into Meme Crypto.”

And as DogeCoin continues to pump, it may continue to attract similar risk-takers: “remember, the gains are only yours once you’ve sold,” Clarke told FM. “What if you’re not fast enough to even get on the rocketship?”

What if indeed? Certainly, the eye-popping high gains that DogeCoin is consistently bringing in may tempt others to take similar risks. And, as Mike Novogratz said in his interview with BloombergTV, “I would be very, very worried if one of my friends was investing in Dogecoin at these prices,” he said.

Now my uncle independently bought $Doge as his first crypto purchase at 40 cents.

Some people just can’t be saved.

However, @AndersonCryptoP, another anonymous Twitter user, replied that: “the scary thing is he might be fine. Doge has been rebranded to Doge at $1.”

Could DogeCoin hit $1 anytime soon? Crypto market analyst, Alex Kruger wrote on Twitter that: “I didn’t believe $DOGE would reach $1 this cycle. Now I do. Big lesson in there (sic).”

I didn’t believe $DOGE would reach $1 this cycle.

Big lesson in there.

Even if DogeCoin does not hit anywhere near $1 this cycle, there is some evidence that DOGE is being taken more seriously as an investment, and that the Dogecoin network could be used for payments. DogeCoin enthusiast account @itsALLrisky wrote that, among other things, “brands are accepting [Dogecoin] as payment.” Among them: AirBaltic, the Dallas Mavericks merch shop, The Kessler Collection luxury hotels, and others.

#Dogecoin is snowballing into a cultural phenomenon

What’s Next for Dogecoin?

However, while Dogecoin may be gaining popularity in the short term, the coin’s long-term trajectory is impossible to determine.

As such, it could be that Dogecoin is just one among “a number of altcoins [that] are experiencing unwarranted price increases,” said Jack Campbell, CPA and Founder of Executive CPAs, to Finance Magnates.

“[…] The rise in altcoins is a classic example of the greater fool theory. The idea is that you can make money from buying overvalued securities because there is usually someone else (the ‘greater fool’) who is willing to pay an even higher price.”

Do you think that Dogecoin’s rise is an example of the ‘greater fool’ theory, or is there more at play? Let us know in the comments below.

Is Amazon About to Settle for Dogecoin? The Payment Use Circumstance Explored