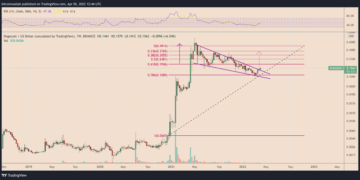 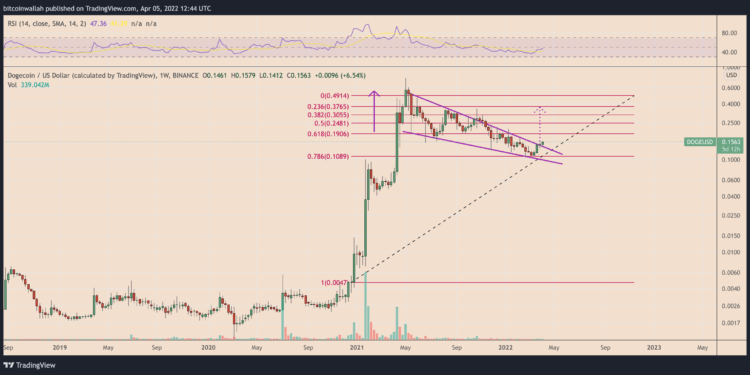 The price of DOGE had gone up almost 6% this week to $0.15 a token.
On April 4, Elon Musk revealed that he had a $3 billion stake in Twitter, reiterating that he has a big say in the market for the coin.

Musk has been a big supporter of the Dogecoin community, which is why he decided to accept DOGE payments at his company Tesla’s online store for t-shirts and other goods.

Musk’s investment in Twitter could help move the company’s crypto initiatives forward and even allow DOGE to be used on the site.

It is called a “falling wedge” when the price moves lower inside a range defined by two converging, descending trendlines and leaves behind a trail of lower highs and lows. These are called “bullish reversal setups.”

In a perfect world, falling wedges come to an end when the price breaks decisively above their upper trendline.
They look for a run-up to the point where the wedge’s upper and lower trendlines meet.

As DOGE’s price moves in a similar way, the chances that it will keep going up have increased since it broke above the trendline on April 4.
So now, the price of the coin is looking to go up to about $0.37, which is about 150% above what it was on April 5. The chart below shows this.

As a result, the bullish set-up comes with downside risks.
Dogecoin’s breakout move above the falling wedge’s upper trendline comes with weaker volumes, which suggests that traders don’t believe in the rise.

DOGE also trades below two important support levels: the 20-week exponential moving average (20-week EMA; the green wave) around $0.15 and the 50-week EMA (the red wave) near $0.17, both of which are important levels.

Dogecoin could come back to the falling wedge’s upper trendline to see if it can be used as a new support level if prices fall back below the price ceilings that were set before that.
On the other hand, if the market goes down for a long time, the whole bullish reversal setup could be thrown out.

It would keep DOGE’s goal of reaching $0.37 if it held the wedge’s upper trendline as support and broke above the 20- and 50-week EMAs with strong volumes.