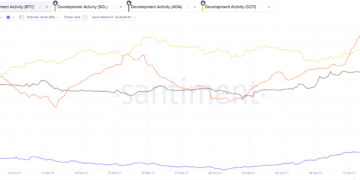 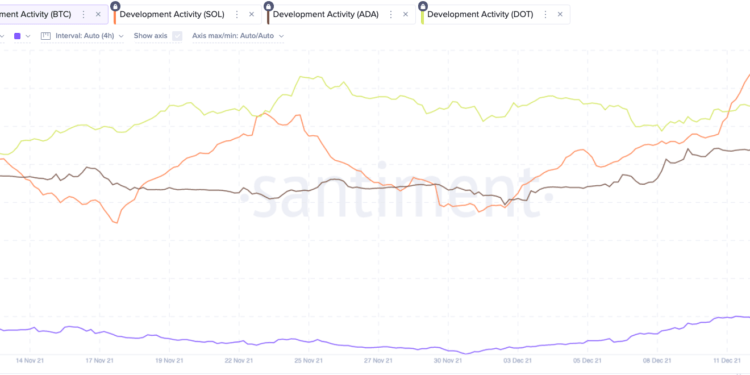 A recent distributed denial of service (DDoS) attack has not stopped Solana, the fifth most valuable cryptocurrency in terms of market capitalization, from dominating on-chain development charts.

Based on information gathered by Santiment, Solana has overtaken the daily GitHub submission rates of Polkadot and Cardano to take first place in the blockchain rankings for the past month. Between November 12 and December 13, the number of daily GitHub uploads for Solana hit 90, followed by Polkadot at 76, and Cardano at 65, according to CoinMarketCap.

The increase in on-chain development activities for Solana comes as a result of a recent distributed denial of service (DDoS) attack on the network on December 9 that significantly slowed down the network. However, even though the fifth-largest blockchain was able to solve the flaws without requiring a network outage, it raised severe worries about the network’s security.

A distributed denial of service (DDoS) assault is a coordinated botnet targeted action that overwhelms a network with fictitious data. In several cases, basic design faults and Solana’s Proof-of-History (PoH) consensus method were cited as the causes of the coordinated DDoS attack. Earlier, a Grayscale Investment report raised the issue of Solana’s usage of PoH, noting that:

“The Solana consensus mechanism uses a new blockchain technology that is not widely used, and may not function as intended. There may be flaws in the cryptography underlying the network, including flaws that affect the functionality of the Solana Network or make the network vulnerable to attack.”

Similar problems occurred on the Solana network in September, when a rapid increase in transaction volume resulted in a network outage that lasted nearly 17 hours, according to the company. The engineers working on the problem at the time were unable to remedy it, and validators were forced to restart the network.

Among the fastest-growing smart contract networks in 2021, the Solana blockchain has emerged as a popular alternative for new decentralized finance and nonfungible token initiatives, as well as a popular choice for existing ones. Because of the project’s increasing popularity, it has frequently been compared to Ethereum, and it has been branded the “Ethereum-killer” by some. Although there is increasing concern about the underlying structure of the network, this could prove troublesome in the long run.