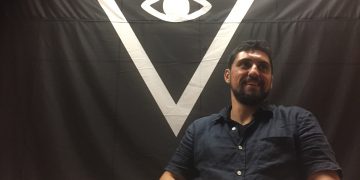 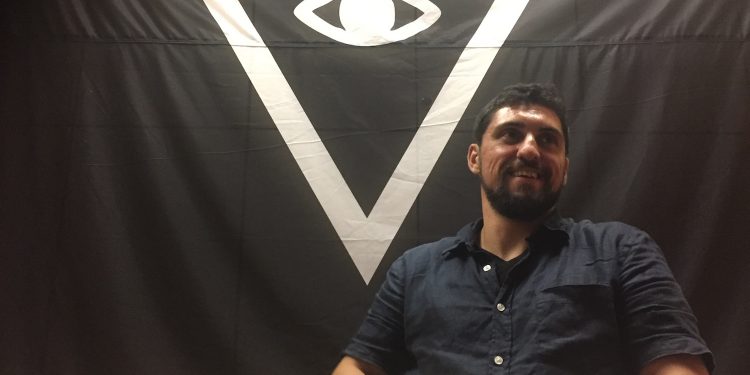 There are many words that could be used to describe Amir Taaki – but today, ambitious is best.

The infamous bitcoin developer – known for co-creating Dark Wallet, Darkleaks and DarkMarket – took the stage during a hackathon he hosted in the wake of the Privacy Enhancing Technologies Symposium (PETS) in Barcelona last week, the same city where he plans to set up his academy of coders, hackers and philosophers dubbed Autonomous Polytechnics.

It’s a bit of a shift, about 1,800 miles to the West from Taaki’s earlier idea, which was to build the academy in Greece. But with a toolset focused on anonymity and autonomy, it might make more sense to build the project in the capital city of the autonomous Spanish community of Catalonia.

Spending no time mulling over the decision, Taaki took to sketching out his political vision on a dirty whiteboard.

In a series of diagrams, Taaki described the evolution of biological cells, the structure of societies and the impact that technology can have on such systems, sparking runaway trends to monopolization, or its opposite — atomization.

Tying the latter to the UNIX philosophy, a branch of coder theory that vouches for minimal and modular units of software, Taaki then exposed the upcoming product suite his academy will build.

Albeit loose mathematical sequences, the audience could tell the scripts comprised the details of an entire dark machinery, a kind of subterranean web 3.0. Distilling the wide-ranging talk, one attendee quipped, “Plans to anonymize the world.”

And while Taaki insisted the details on the whiteboard not be published for fear they be co-opted – “There’s a lack of ideas in this space,” he told CoinDesk – it’s clear the tooling he’s got in mind would be a revolution, which is exactly what he wants.

Having left bitcoin development to fight alongside a Kurdish militia in Rojava, an autonomous region in northern Syria, Taaki is hoping to spread that region’s practices of democratic confederalism, a political theory that advocates for small, self-governing communities.

“This is our objective as an organization, which is using technology for autonomous democracy and the collapse of the system of nation states around the world.”

To make this happen, Taaki expects participants of the academy to undergo a strict training. Newcomers are subject to a three-month introduction period, one that repeats every six months to one year.

“It’s a vehicle for developing them as leaders, to develop their skills technically, socially and being able to effectively organize other human beings and coordinate together tightly,” Taaki told CoinDesk.

While there’s room for ideological diversity within the organization — for example, Taaki wants to set up multiple tiers of participation and a system of allied academies globally — core attendees will need to follow careful timetables, give up other engagements and dedicate themselves fully to the project.

“Together we can elevate each other higher, we can learn from each other, we can dedicate ourselves to a sense of purpose and become stronger,” Taaki said. “And because we gain something from this, we are willing to forgo certain comforts of life, certain smaller freedoms for an even bigger freedom that we want to grasp.”

For himself, Taaki lives a rigid lifestyle: lifting weights, measuring his meals, avoiding weed and alcohol. And with the occasional snide remarks about “lazy hacker culture,” he doesn’t hide his disdain for those who don’t.

“You can’t party and have the revolution at the same time. They’re mutually incompatible things,” he told CoinDesk.

That’s one of the outcomes he fears for bitcoin, and even the cryptocurrency community as a whole – that while it has attracted some of the best minds in technology, there’s a risk that it will simply devolve into play.

“There’s a danger that bitcoin as this transformative tool to liberate humanity will just be turned into a nice subculture where we meet up with friends at conferences and a few geeky people play around, make investments, but it’s nothing more, and the potential that exists, that truly exists inside of bitcoin, does not get realized,” he said.

That’s why instead he wants his followers to have a serious drive.

That drive is a mix of both the democratic confederalism of the Rojava movement and a distinct theory of technology theorized by American philosopher Lewis Mumford.

The basic premise of democratic confederalism is self-governance, but the theory also elevates environmentalism and feminism.

On the other side, Mumford suggests that there are two types of technological process, monotechnics and polytechnics. Whereas the former creates global, top-down, single-purpose technologies, polytechnics conceives technology for users across different socio-political contexts – and it’s the latter that Taaki believes can bring about change.

“We believe in building technology on a human scale, for humans to employ in many different contexts to solve problems that they face,” Taaki told CoinDesk, adding:

“The technology needs to be targeted for socio-political change, not just to find like the perfect mechanism to make people comfortable, for convenience, to make people happy.”

Not only the fears of bitcoin becoming just another fun fad, but Taaki also believes what’s missing from the first and largest cryptocurrency is this idea of polytechnics.

According to Taaki, bitcoin’s failure came from the belief that the technology itself was sufficient to enact a global reorganization of power, and by simply inserting it into systems, human freedom would increase.

However, that vision failed, in part due to an inability for bitcoiners to propagate the political concepts inherent to the technology and adopt the tooling to constantly evolve with the landscape.

“Technology is the means, or the instrument of power that we use for shaping the society, but we are fundamentally the drivers of that technology,” Taaki asserted.

“The problems with bitcoin are in no way technical, they are deeply social and economic problems,” he said, adding:

“The ideas behind bitcoin have exhausted their potentiality to be able to advance that project forward.”

And this seems to stem, according to Taaki, from the prevalence of the “engineering mindset.”

“There is an elite inside bitcoin. They have a very particular way of seeing the world, and that viewpoint of the world, which sees things in a very technical way … in some cases can be extremely limiting,” Taaki said.

He gave the example of the lightning network, which while it solves a much needed technical problem — scalability — it cannot solve the wider societal issues surrounding the cryptocurrency’s lack of adoption. At the same time, corporations and central banks are co-opting the technology, developing more usable products and overtaking the cryptocurrency community.

“Unless there is a fundamental correction in the course of events that we’re heading into now, that is what is going to happen,” Taaki warned.

And that’s a large part of the work he is trying to achieve with Autonomous Polytechnics.

At the time of writing, Taaki and the earliest enlisted members of the revolution are squatting at the historic home of the Cooperativa Integral Catalana, a cooperative that spawned a cryptocurrency of its own, FairCoin.

But the plans for their very own academy are laid out.

It’ll be located at the base of Carmel Hill, stretching across 8,600 square feet, containing a shared workspace, living quarters, a garden and if they have enough money, a basement that can host conferences, hackathons and other events.

Taaki has even designed a special flag for the academy, in the colors of the organization, green and black, with a blazing sun, as a symbol of technology, in the center.

And with that, there’s no shortage of interest from potential participants in the program, many of which are currently living with Taaki and told CoinDesk they’re excited to begin. But still, they wait.

“It’s been almost a year now, and we’re still waiting to get started,” Taaki told CoinDesk.

Part of this stems from the construction of the building, which is slow going, but another thing stands in the way too — a lack of funding.

Taaki is looking for $10,000 to $20,000 – merely a drop in the bucket compared to the huge amounts of money being raised by sometimes suspicious initial coin offerings (ICOs) – however, many investors have been unwilling to donate without the promise of something in return.

But the academy’s plans are to create free technology, and even its business arm would merely be a mechanism for funneling excess profits into the support of democratic confederalism around the world.

“Right now to get established we’re trying to get donations which is kind of difficult because despite rhetoric a lot of people in this crypto space are very stingy,” Taaki said.

At the moment, the project is being sustained through donations from Cody Wilson, the co-creator of Dark Wallet and the infamous creator of the 3D printable Liberator pistol.

But Taaki would like to diversify those donation streams, and at this point, he’s running out of options.

“Dude, at this point, I would take money from African dictators.”

EDIT (09.45 UTC, August 13 2018): An earlier version of this article incorrectly stated that Taaki was the co-creator of decentralized marketplace, OpenBazaar. Taaki did not contribute to OpenBazaar directly, but created DarkMarket, which was later forked into OpenBazaar. This has now been corrected.